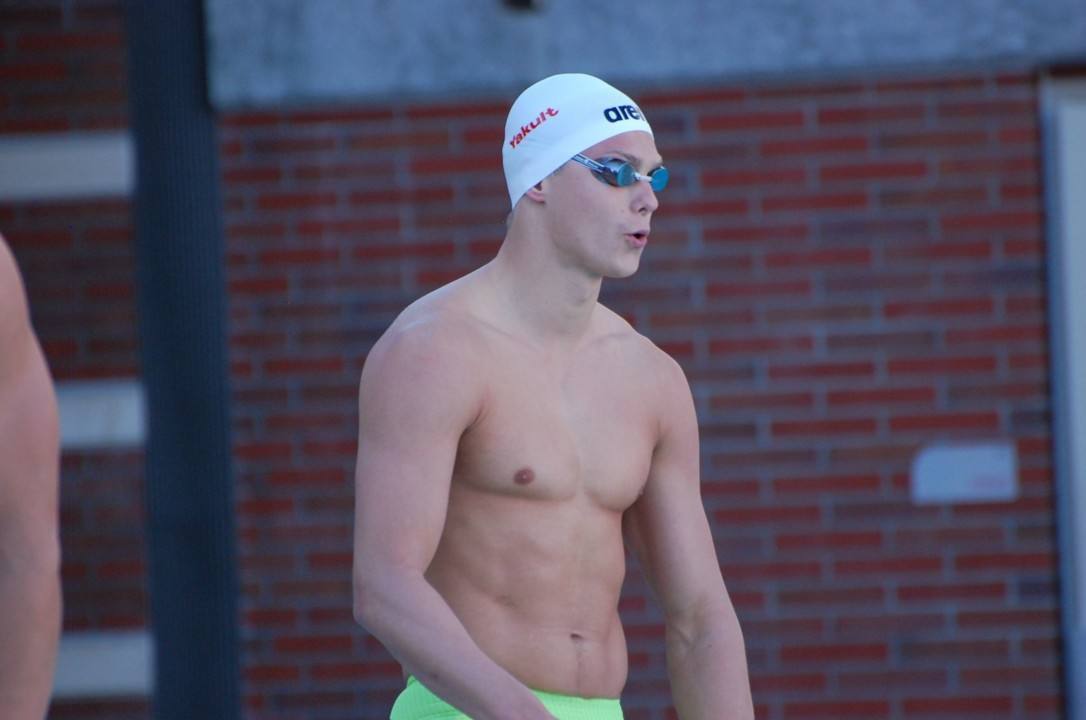 Morozov, along with 2 other nominated Russian Olympians, were beneficiaries of "disappearing false positives," according to WADA. Archive photo via Anne Lepesant

The World Anti-Doping Association (WADA) has confirmed that in barring 3 athletes named in the McLaren IP report released last week, the three named swimmers were involved in the “Disappearing Positives” portion of the report.

World Champion Vlad Morozov, who yesterday plead his innocence in a letter to FINA president Julio Maglione, is one of 7 Russian swimmers that FINA has so far disallowed from competing at the 2016 Olympic Games as a result of the IOC’s directives, with the potential for more to come.

Of those 7, three, including Morozov, Nikita Lobintsev, and Daria Ustinova were barred not for prior suspensions, but instead for being named in the McLaren IP report, though without further detail about what the specific implication was against them.

A spokesperson for WADA, who sponsored the McLaren report, confirmed that those 3 athletes named by FINA were involved in Disappearing Positive Tests, or what the McLaren report says was a scheme to dispose of positive tests taken by Russian doping authorities. We have requested more specifics on when and how many positive tests the swimmers are alleged to have had ‘disappear,’ and whether or not those details would be released besides to international federations, and WADA has not yet responded (though they generally are responsive, and have just been slower in recent weeks due to an inundation of requests). WADA has also not confirmed if there are assurances that all athletes with “Disappearing Positive Tests” had positive tests disappear rather than negative tests.

From the McLaren report:

“since Professor McLaren published his Report on 18 July, the Agency has facilitated the transfer of evidence from the McLaren Investigation team to the International Paralympic Committee – which acts as an International Federation for several Paralympic sports and has authority over the Paralympic Games – and the International Federations of Olympic sports that are implicated in the Report. Specifically, for follow up as a matter of urgency, the Agency transferred names and relevant details related to athletes under their authority, which escaped sanctions due to the ‘Disappearing Positive’ methodology described in the Report; and, that may be entered to compete at Rio 2016.”

Morozov stated his case on the basis of not only having never tested positive or missed a test, but on citing the fact that many of these tests have been from non-Russian authorities, including the UKAD (United Kingdom), USADA (United States), and FINA (the world governing body).

We will share more information about the quantity and timing of the ‘Disappearing Positive Tests” for the 3 swimmers if it is provided.

Morozov has spent several years living in the US, training and competing for the University of South Carolina, he was drug tested at least once a month by FINA, WADA, RUSADA, USADA, UKAD in competition and out. And NEVER was positive, as well as never was blamed in taking smth illegal. But suddenly (surprise!) just before the Olympics it was announced that his name was in secret part of McLaren report and all of you believe he is a doper? Oh, really? Without any proofs? So, when he was competing for US university, everything was OK, but since he is expected to receive a medal for Russia, it changes everything. I see.

“WADA has also not confirmed if there are assurances that all athletes with “Disappearing Positive Tests” had positive tests disappear rather than negative tests.”

“Morozov stated his case on the basis of not only having never tested positive or missed a test, but on citing the fact that many of these tests have been from non-Russian authorities, including the UKAD (United Kingdom), USADA (United States), and FINA (the world governing body). ”

Read the article before jumping to conclusions.

Read the Maclaren IP report before jumping to conclusion.

The cover up, the false statement on his FB, the arrogance in appealing the ban look worse than the violation itself.

The report of July 18th 2016 is about Winter Games. How did swimmers get in there?

why did they transfer it to PARALYMPIC body?

It is not that the sample was “swapped”. It is that his positive result was “disappeared”. The disappeared and swapped systems were two different “fail safe” systems used to cover up doping with PED. The “athlete biological passports” were also suspicious.

Actually, the sample could have been swapped. When the WADA visit was announced, Russia destroyed 1417 samples. Of the remaining samples not destroyed by the Lab, 37 were positive samples for which a negative report had been made in ADAMS following the Disappearing Positive Methodology. These were the samples that were going to be collected by WADA. Russia decided that the reported results on some of the samples could be explained. As for the remaining samples, the Deputy Minister arranged for the “magicians” to come. There was not enough time to find clean urine from the remaining athletes to substitute for the positive samples. Instead his staff had to find clean urine previously provided by other athletes that adequately matched… Read more »

So the hormone tests were easily manipulated to fit into the previous noted ratios & that urine can be reconstituted , seals unbroken & resealed & / or signatures transferred. Are Russians clever than everyone else or at short notice can this be done anywhere?

The global positives is in the 1% range averaged .From that most people would think there is not a problem or the testing is very poor.

May I insert some history .We have n’t had this much attention on urine since the dye setters who collected urine to fill their barrells & soak the cloth were technologied out. People gave them a wide berth on the way to the mill with urine soaked… Read more »

WADA stated that his positive test was “disappeared”. They do not say it was swapped or disappeared and then swapped. For me this is a clue about how long ago his testing was positive.

Good news is that if Vlad was juicing in 2013-14 (when most of his medal-worthy times were), he probably won’t be able to get away with the same shenanigans (if he swims) in Rio. Without the supplements, he is probably not a medal threat.

But it does make me wonder about the swimmers who DO medal in Rio.

This is what I think: if he swims in Rio and you think that he was doped before, than according to your logic, he will crush and burn. If he swims well and tested negative in Rio, then he is clean. Let the guy prove you right or wrong, but let him swim. This is his only way to defend himself.