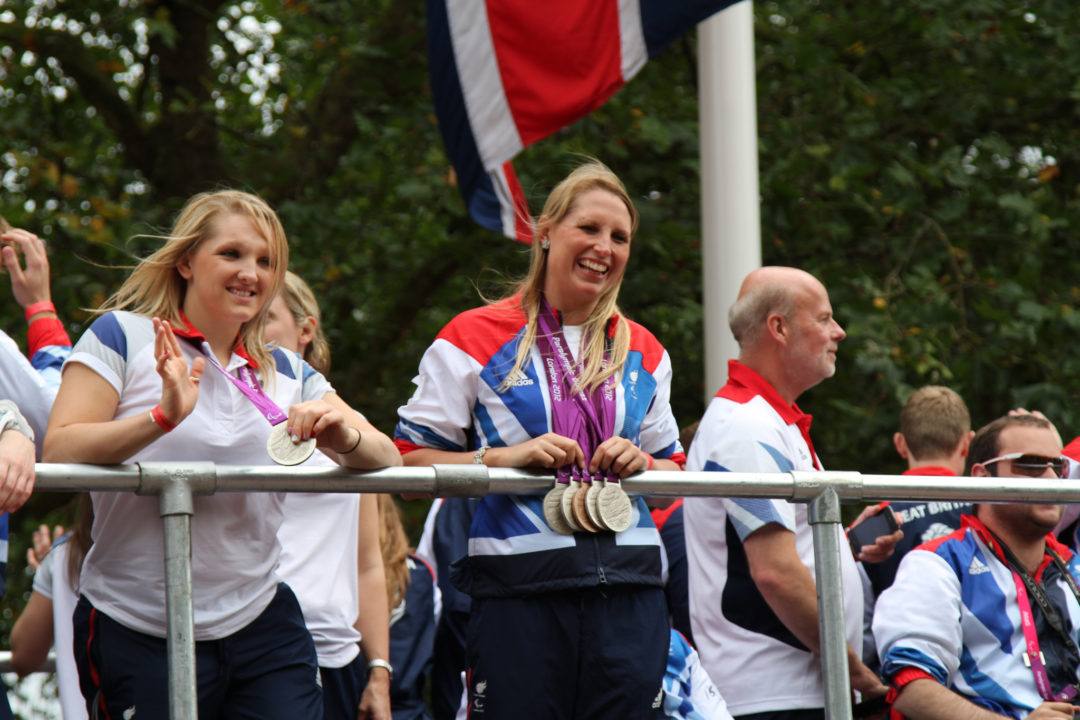 5-time Olympic medalist Stephanie Millward (middle) now is the world leader in the 100 back for S8s in 2016 by more than 6 seconds. Archive photo via Scott Cawley

Great Britain’s Stephanie Millward, competing in her best event in her first major competition since being reclassified as an S8 in early June, has broken the World Record in the women’s 100 meter backstroke.

Millward swam a 1:12.94 on Wednesday’s prelims, which by the multi-class point system made her the fastest qualifier into finals. In the process, she cleared over a second from the existing World (and National) Record of 1:14.36 done by fellow Brit Heather Frederiksen (1:14.36) in 2009. Frederiksen’s record-setting swim was done in the same Ponds Forge pool in Sheffield that this week’s British Summer Championships are being held in.

At 34, Millward is the oldest swimmer in the event by 15 years, and she enters this summer with 5 Paralympic medals – including a silver in the 100 back at the London 2012 Olympics while swimming in the S9 category. Now reclassified as an S8, generally speaking a slower category, she not only broke the World Record with this swim, but leads the world in 2016 by over 6 seconds.

At the IDM International meet where Millward was reclassified, she didn’t swim the 100 back, instead racing the 100 breaststroke and 100 freestyle. She won the S8 class in the 100 free at that meet by a second-and-a-half.

Millward’s 1:12, while a World Record in her new class, isn’t her best time – she’s been faster than that swim at least a dozen times, including most recently in 2013. Her best time of the year prior to this swim is a 1:13.04 from the Dave McCullagh International meet in March.

well lets hope someone protests and gets her checked again !!!!
she is not the only British swimmer who needs to be looked at again !!!!

Take a look at the British S14 women, two of them with able bodied qualifying times.

@SourGrapes Do you realize the negative impact misclassifications have on the entire para swim world? All selections for all countries, for all international meets are, for the most part, based on World Rankings. When you have swimmers that are clearly in the wrong class, even for a year or so, and world rankings are completely/inaccurately inflated, you have an entire pool of swimmers in the world trying to position themselves “within bronze medal status.” The effects on developing swimmers is really detrimental.

It would be the same as taking all of the S10 swimmers and saying, “you know what, you’re the least disabled, you should really be competing with all of the able bodied swimmers now, and your time… Read more »

Loeffler already sacked once – can be do it again ? Comments welcome

Doesn’t this sound like a lot of sour grapes ? Unlucky for long or maybe lucky ? If Millward had been (re)classified before maybe no 12 year old long gold medal winner ?

Jess long won gold at 12 in Athens 2004, Millward hadn’t been classified at all then so this could never have happened. Please know the facts before you comment.

You mean an unfounded allegation was made in swim swam comments ??? Crazy . I want to level the playing field for adult athletes – not fair !!! no more 12 year olds right guys ???

Are the IPC addressing IM, miss-classifications etc.? I do not see any progress whatsoever since London 2012, just lots of talk. It seems rather illogical to change classification rules 1 year prior to the Games especially given that the IPC rules that athletes can be eligible for reclassification following a change to classification rules. Did this occur? Have all short statured minors been reviewed annually for example?
https://m.paralympic.org/sites/default/files/document/150831095438998_2015_September+IPC+Swimming+Classification+Rules+and+Regulations_1.pdf

Rio 2016 Classification for Swimming will be conducted September 3rd through 5th from 9am to 6:30pm Swimmers however cannot be protested by any NPC other than their own. Is it fair that NPCs cannot protest another NPCs swimmer?

Head of legal uk sport, laughable, UK S14 female swimmers have times that would qualify them for US able bodied Olympics. Nobody bats an eyelash over that group. Which was totally eliminated in 2000 from all Para sports for certain cheating countries.