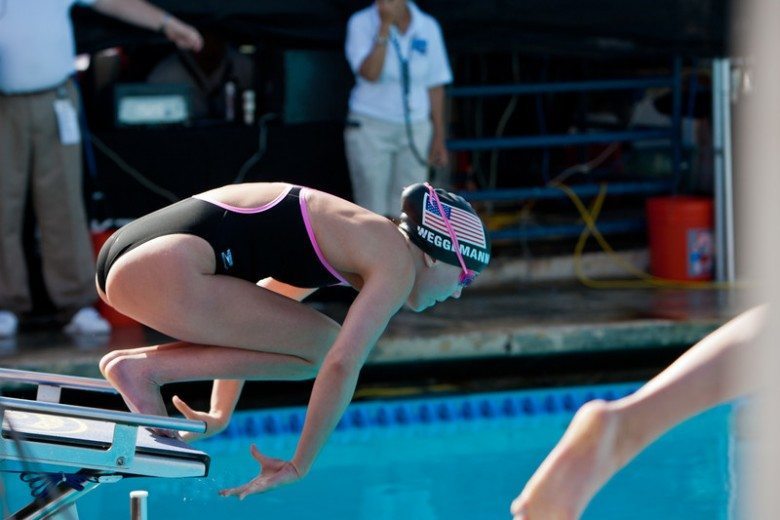 Paralympic superstar Mallory Weggemann is competing against a whole new field on the eve of the Paralympics (Photo Courtesy: Melissa Lundie)

The 2012 Paralympics are off to an inauspicious start, with the American team left in a bit of turmoil. On the eve of the launch of the 2012 Paralympics, the IPC is moving athletes all over the place after most likely protests by other countries. (Read more about classifications here, including a country’s ability to protest a swimmer’s classification.)

This causes a number of problems for the Americans, not the least of which is that they took two of the United States’ best medal hopes and moved them to higher classification, which broadly speaking means much stiffer competition. Zook was the 2008 Olympic Champion in the 100 back in S10, but since those Games was moved to S9.

For Weggemann, this will be her first Paralympics, but she had been competing as an S7 swimmer. She will now face head-on the other star of American Paralympic swimming, Jessica Long, who is also in the S8 group.

It’s not clear if it’s unrelated, but American Victoria Arlen, who is brand new to the Paralympic scene this year but is already taking the world by storm by crushing World Records, is not listed as being entered in any races on the London 2012 website. We are seeking for a more complete answer to that, though she’s still entered in the meet.

Update: The Telegraph, a British paper, is reporting that Arlen is set to be reclassified as well.

Among the questions raised:

What Happens to World Records? – Both Zook and Weggemann broke World Records in their previous classifications, including Weggemann with more than a dozen record-breaking swims.

What Happens to the American Relays? – Relays at the Paralympics are done by “points”. Basically, all of the classifications are added up, and that point total must be under a certain sum: one for 20 points, one for 34 points. These athletes would have mostly been in the 34 point category, but now the Americans might have to rethink who are on those. The American men haven’t won a medal in the 34 point medley in some time, and this year’s team, with a big leadoff from Zook, was expected to challenge.

What About Three-Per-Event Rules and Qualiciation? – With these changes, the Americans are now forced to pull swimmers out of certain events, as they are limited to three entries per event and classification. With Jessica Long, Mallory Weggemann, and 2008 triple silver medalist Amanda Everlove, that leaves many other S8 swimmers in limbo. However, at present, the Americans have four swimmers (the three mentioned above plus Brickelle Bro) entered in the S8 50 free. Weggemann is not, however, entered in either the 100 fly or 100 breast: both events where she is the World Record holder under her old classification. In those two events, she was unlikely to contend for medals in the S8 (SM7 for breaststroke) classes.

A Mega Storyline Lost – If Arlen misses the meet, or is reclassified as well, this is perhaps the most disheartening for the Paralympic movement, as this will lose one of the best storylines of the 2012 Paralympics: Arlen vs. Simmonds. Victoria Arlen was in a vegetative state until 2009, then after years of being out of school moved right into high school and instantly became an honor roll student. She was a swimmer before the condition that caused her to lose the use of her legs, but she was only heard of in Paralympic circles when she exploded at the US Paralympic Trials this summer and began crushing World Records. Britain’s Eleanor Simmonds has become the face of these games. She won two gold medals in 2008 at only 14 years old, and was the first swimmer to break a World Record at the London Aquatics Centre. Having those two square off would have been massive for ratings. Let’s hope that this is still in play.

The IPC Classification system is a joke and needs to be looked at. Even if a potential athlete provides medical documentation, the classifiers do not look at it. Perhaps, someone should see the Medical Creditials of the IPC Classifiers. It is highly unlikely that these people are top medical professionals with backgrounds in the different types of disablities that the Paralympic athletes have.

Look at the Classification system like judging Gymanastics or Diving- It is subjective. It is political and in high stakes sports , it happens all the time

Correction to your article-
Zook was just recently classed (2012) to an S9. He has be an S10 his whole time competing in the Paralympics.

ASmith – trying to sort out the suggested correction at the end of your comment. Is that different than what I wrote?

Braden you wrote “Among those moves that are confirmed by the start lists, Justin Zook has been moved back to the S10 classification” so I am still unclear if he is an S10 now or an S9

The classification system is flawed and can provide high political drama between nations nd can cause bitter rivals. A nation can essential protest a classification and put a disabled athlete in a situation where they are graded on their level of function- this happens in and out of the pool – Class 7 and class 8 have been historically the most difficult because athletes with spinal cord injuries and cerebral palsy are more difficult to score than blind and amputee athletes, It can be an arduous process and it the USA team can protest- and lose- For athletes it’s draining- as a class 8 in Barcelona and a class 7 in Atllanta- my disability did not change- my training did… Read more »

I continue to be confused by the classification system and how our paralympic team was chosen in general (a swimmer from our club went to trials). Political? Yes. Unfortunate for those who might now be bumped? Understatement. If the powers that be are going to change classifications after the swimmers arrive for the games, I hope they have the decency to allow all of the athletes to swim and not confine us to three, leaving somebody out.

I went to Victoria State Championships in Melbourne a few years back and my understanding is the para athletes compete against the world record time in their event. So they just swam 200 breast, and all the athletes were seeded by their entry time. But the results were based on the percentage over the world record for their classification. So it’s not about who finished first, its about who is closest to their World record. I don’t know if that is how its done here. I am certain these athletes have family members who have paid to go and now may not get to watch them swim. Not to mention the fact that these athletes must be devastated no to… Read more »

morrow3 – what you’re describing are “multi-class” events, which is how most lower-level meets are run (simply because it’s hard to find numbers to fill out all of the classes most fo the time). At the Paralympics, they have such a huge pool of athletes to choose from that they don’t run into the same issue, so races are sorted out just against swimmers in the same class.

I can tell you this much – those close to the Paralympic team are absolutely livid about this. The IPC needs to figure out a way for this not to happen, because they’re going to have more eyes on them now than they ever have before.

Disagree- Today, was the first day of swimming and several classes did not have two complete heats of 8 swimmers. If a class level can not identify 16 swimmers to swim, why bother calling it “elite” when the some of the swimmers do not even have to try in Prelims… Paralympic Swimming as a way to go..