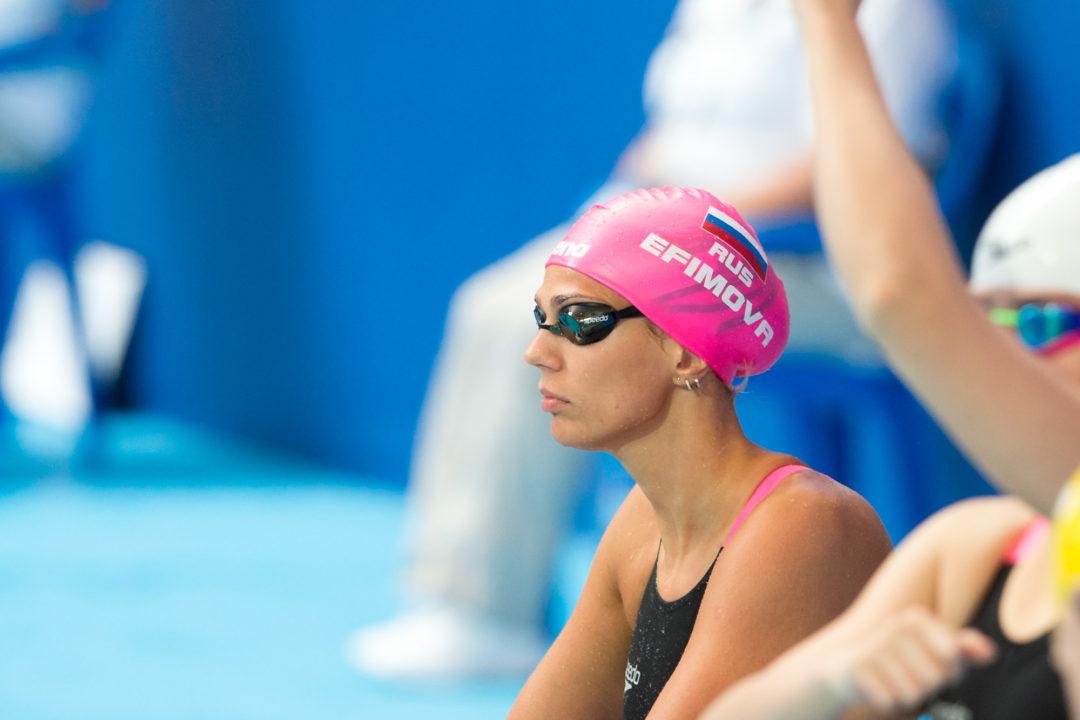 FINA has dropped doping charges against Russian former World Record holding swimmer Yulia Efimova, according to the head coach of the Russian National Team. That will officially make her a part of the Russian Olympic Team for the 2016 Summer Games in Rio de Janeiro.

FINA has not responded to a request for comment.

Efimova tested positive for the banned substance Meldonium earlier this year, which was the second time since the last Olympic Games that she had recorded an adverse analytical finding. The latest substance was commonly used by Russian athletes but was added to the World Anti-Doping Code’s list of banned substances as of January 1, 2016. Meldonium was originally developed to help Russian soldiers carrying heavy packs maintain their endurance across elevated terrain, but has since found use as both a performance enhancer for athletes and a heart medicine.

According to the TASS, she’s one of nearly 300 athletes to test positive for the substance since it was banned. FINA initially put her under a temporary suspension, but then lifted that temporary suspension in May while awaiting the full run of proceedings to go through.

“The FINA decision was expected, not a surprise. We waited, and it happened,” said the head coach of the Russian National Team Sergei Kolmogorov. “Yulia will join the team on August 1st in Brazil, and she is now training according to an individual plan.

While awaiting a decision, Russia altered its Olympic qualifying criteria to leave room for Efimova to be a member of the team even though she was still suspended during the Russian Olympic Trials. While she was not named to the country’s initial Olympic roster, she was later added to the approved roster pending the outcome of the doping proceedings, which Russia has been forced to do in many sports.

While Efimova’s case lingered unusually long between the FINA Doping Panel and a probable appeal to the Court of Arbitration for Sport, WADA extended a previous “Meldonium grace period” through September. This grace period, originally extended only to athletes who tested positive very early in the year (prior to March 1st), was put in place because there was uncertainty about how long it would take Meldonium to clear an athlete’s system if it was taken late in 2015 before it was banned. While Efimova’s testing results (which showed “clean” urine results sandwiched by “doped”urine tests) were suspicious, the concentrations were all very low, which effectively forced FINA’s hand in excusing her offense.

Included in WADA’s statement, which you can read in its entirety here,  the agency states,”Typically, WADA does not commission excretion studies for substances that are added to the List as the Agency is generally able to rely on this information being provided by the manufacturer or regulatory authorities.”

“In the case of meldonium, however, no information relating to urinary excretion was available and so once it was added to the List, WADA undertook excretion studies.”

WADA’s Director General Olivier Niggli stated that, “The addition of meldonium to the Prohibited List created an unprecedented situation and therefore, during a transitional period, it warranted additional guidance for those in the anti-doping community tasked with managing cases.”

While Efimova lost several results because of her initial doping ban in 2013 for a different substance, she still enters the 2016 Olympic Games as a 4-time World Champion, including as the defending World Champion in the 100 breaststroke. She’s also the 2012 Olympic bronze medalist in the 200 breaststroke, the former World Record holder in all three breaststroke distances in long course, and the current-season World #2-ranked 100 and 200 meter breaststroker.

FINA and WADA are a total joke.

I don’t see what WADA has to do with it. Sharapova is banned two years for the same substance, and many meldonium dopers are yet to get their verdict as federations are playing the waiting game(not wanting them back in before totally cleared). FINA’s just not putting the hammer down the way they should and could.

You want to ban someone for taking a substance before it was politically banned. That makes no sense.

principle > politics. PEDs are PEDs and obviously the athletes knew this before WADA or any other concerned authority did. There will always be a lag in legislation but that doesn’t mean that taking these substances is ethical.

This whole Meldonium “scandal” is just theatre. It was banned by Canadian run WADA to mess with Russians. Meldonium has been around for many years. Its nothing new. Its just an over the counter heart pill that gives some energy like a Caffeine pill. Its much ado about nothing. But every day people talk about it as if its a steroid. There is zero studies that show Meldonium is a PED. These athletes only “failed” a doping test because small Meldonium traces last in the system for a long time, and WADA didn’t do any trace studies before banning. Its just a tiny trace amount that shows they stopped taking it before January 1st. So they have been defamed and… Read more »

Doesnt matter at this point. It is not her first offense nor will it be her last at this rate

Yeah but she was living and training in the US where it is not over the counter nor do i believe its prescribed by doctors. I would give her the benefit of the doubt if this was her first go around but its not.

The impact is not a caffeine like boost. It is also a drug with very little science behind it in terms of human use side effects or harms. The largest prescribed use is as part of a drug cocktail program to increase blood flow and cell recovery. Putin described it as a vitamin that keeps the heart muscles strong, but I missed the part where he was a doctor. The Latvian scientist who pioneered Meldonium envisioned it as a drug to administer to enhance the endurance and recovery of sled pulling huskies in Siberia.

Read the description from the online pharmacy http://extrapharmacy.ru/buy-mildronate-online-meldonium below. You are telling me its not a PED. The root cause is that Russia along with other countries is ranked as one of the most corrupt in the world and many of its athletes are simply following the unfortunate example of their leaders. ie “cheating is OK if you can get away with it” Check out http://www.transparency.org/cpi2015 Normal usage of Meldonium is a course of 4-6 weeks. Sharapova* and Efimova* have been on this PED for years continuously. Stop defending the indefensible and rather be a positive voice for real change in Russia and other countries so that we can watch and enjoy free and fair completion. Long term your attitude… Read more »

I totally agree. Her second unintentional offense how tragic!!! She is so fast and pretty to boot…I wish her the best On a serious note, though, that recent melodium ruling dealing with the pharmacokinetics of the drug is complete bs imo. for three reasons. 1) melodium was clearly taken as a loophole performance enhancer and wada should not have any mercy for “rule abiding” cheats–there was clearly intent and conspiracy in this case 2) I highly doubt that their kinetics measurements could have been so far off as to warrant a increase in the grace period by half a year 3) it appears that this decision was tailor made so that some very high profile athletes could be given a… Read more »

Sharapova admitted to taking meldonium in 2016.

Sharapova is the only one who fully fell into the political trap and took it after January 1st. She simply didn’t notice it was put on the banned list. Because she took it after January 1st she screwed herself and then these people had the legal means to mess with her. And gave her a 2 year ban for something that should have never been banned to begin with. If Sharapova had stopped taking it before January 1st she would have still “failed” the test but would have been later exonerated because the trace amount would be under the threshold. This is what is so sinister about this Meldonium political bs. Because traces last so long it led to athletes… Read more »

Sorry, I don’t believe Sharapova or any elite world class athlete could be unaware of what is on the banned list. And even if they were ignorance is not a defense. Efimova, Sharapova and all other athletes knew this was a banned substance as-of December 31, 2015. The Russian federation made statements and entered oppositions to Meldonium being added to the banned list month prior to December 2015. Apparently Russian athletes were determined to take this drug up to the witching hour before it was banned. You’d be correct that is within the rules. Where you are off track is Efimova’s tested levels of Meldonium were higher than trace threshold amounts two months after the substance was banned. This imputes… Read more »

Sorry, wrong Joel. There were trace amounts of the substance when she was tested in February not March. FINA correctly concluded that this was consistent with her explanation that she took the substance while it was legal and stopped taking prior to the date it was banned. Had she been taking the regular 4-6 week course of the substance after December 31, 2015, she would have had higher levels of the substance in her system than tested and, as noted, no one really knows exactly how long Meldonium stays in the system. The girl had a world record and four European medals stripped when she tested positive for a banned substance that is sold over the counter in the United… Read more »

You won’t see Ruta in the 200, she doesn’t have that kind of range. Yulia is world class at all distances.

Seeming that Ruta isn’t rostered in the 200, I kind of worked that one out already, but feel free to continue stating the obvious…

shame, hope Ms. King from Evansville, IN and others dash her hopes of Olympic gold