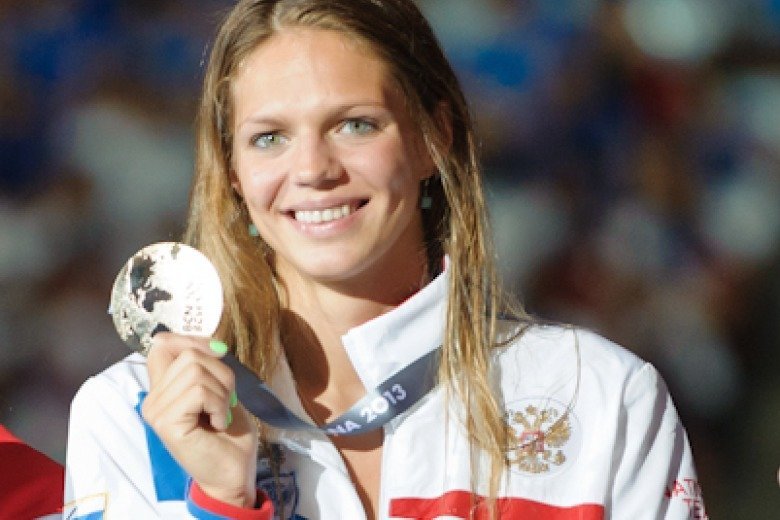 World Champion Yulia Efimova has been stripped of four European titles and two World Records by FINA after a positive doping test.

The FINA Doping Panel has levied a 16-month suspension on Russian breaststroker Yulia Efimova, dated from October 31, 2013 through February 28th, 2015. This was after a positive test for the substance 7-keto-DHEA, which is classed by the World Anti-Doping Code as an Endogenous Anabolic Androgenic Steroid.

The substance is similar to regular DHEA, but is not converted directly to testosterone or estrogen, and is marketed as a dietary supplement for weight loss. The substance is legal for sale to the general public in the United States.

FINA did accept that Efimova did “not intend to use 7-Keto DHEA in order to enhance her sport performance” and that rather she believed she was taking a simple, legal, L-carnitine supplement.

According to the FINA Doping Panel’s full decision, Efimova tested positive in a urine sample taken on October 31st, 2013, in an out-of-competition doping control conducted by FINA. The sample was tested at the Montreal, Canada WADA accredited laboratory, as Efimova lives and trains for most of the year in Los Angeles in the United States.

Efimova, through her representative Howard Jacobs (who has represented many United-States-based swimmers in their FINA proceedings, including Jessica Hardy and Omar Pinzon), waived the test of the B sample, and provided a supplement known as “Cellucor CLK,” which was purchased from a GNC store, as the source of the positive test.

Per documentation, she “contended that she did not bear significant fault for her positive test and that pursuant to FINA DC 10.5.2 the minimum possible period of ineligibility of only twelve (12) months should apply”. In other words, she never asked for a total waiving of suspension, and sought the same leniency that her Trojan Swim Club training partner Jessica Hardy got after a positive test in 2008.

Despite 7-keto-DHEA being a listed ingredient on Cellucor CLK (unlike Hardy, who claimed a tainted supplement), Efimova claimed that her short period of use (just one week) and 12 other clean tests during the year should have provided her some leniency. She said that the salesperson at GNC told her that Cellucor CLK was doping-free and that it was a better product of than one that Efimova has taken for a long period of time.

Efimova also testified that “her coach at the Trojan Swim Club, David Salo, is adamantly opposed to the use of supplements of any kind” and that “her coach frequently tells his swimmers that they can get all the nutrition they need through a well balanced diet and that supplements are unnecessary.” Efimova also cited warnings from Hardy about supplements. This is significant, given some concerns from the swimming community over the high number of positive tests that have come out of the Trojan Swim Club group.

The Doping Panel referred to Efimova’s “naivete” in trusting the salesperson at GNC when purchasing the product, and attributed her lack of English as a possible contributing factor. They also acknowledged clean tests on October 21st and November 10th, both of which came back clean and both of which corroborate Efimova’s claim to have only used the substance for one week.

Though they made several concessions, the Doping Panel said that “her care and caution in purchasing and using supplements and failing to read the ingredients on the label of supplements that she used fell considerably below the level that should be expected from an elite international swimmer and world record holder.”

In other words, the panel is holding her to a higher standard of cause because of her position in the sport.

Ultimately, the “Competitor’s personal duty to ensure that no Prohibited Substance enters his or her body” clause was cited as the reason for a 16-month suspension. The “degree of fault” determines where in a range of 12 months (minimum) to 24 months (maximum) Efimova’s suspension fell, and the panel decided that 16 months was the appropriate time period.

Efimova will be stripped of her results from the positive test forward, which includes loss of World Records in the 50 and 200 breaststrokes in short course meters, done on November 10th at a FINA World Cup and December 13th at the European Championships, respectively.

Efimova will further be stripped of four golds and a silver from the 2013 European Championships. While FINA did not specifically mention the relay medals won by Russia in two relays at the European Short Course Championships in December, they too are probable to be on the chopping block. We have asked for clarification on this fact.

See more about how the medals will come out here.

Efimova will not lose her two gold medals from the 2013 World Championships. She and her attorneys will have 21 days to appeal to the Court of Arbitration for Sport in Switzerland, if they so choose. The suspension will return her to competition just in time to compete at Russia’s trials for their hosted 2015 World Championships in Kazan, though by rule she is unable to train as part of an organized team during her suspension.

Yowza. Can you clarify the last sentence— does it mean she can’t train with an organized team?

Hulk Swim – yes, it does, though these rules are notoriously difficult to enforce.

Just like in the case of Jessica Hardy. She was supposedly banned from training with any club, and yet only a few weeks gong back to competition, she already broke WR.

It is a mockery of WADA/FINA and evidence of random rules (or random oversight) for the punishment of positive test of banned substances. Does anyone here really beliieve Hardy was training on her own in her backyard pool during her ban?

There was an Australian, a distance swimmer, a few years back, who was under temporary suspension, and it was documented by several papers that he was training alone, so it seems as though some athletes stick to the punishment.

It’s a rule that’s not only hard to enforce because of visibility and monitoring resoutces, but because of interpretation of “training with an organized team.”

She commented on it and said she’s going to keep on training in US for World Trials and Kazan.

She looks a lot like Tracy Spiridakos in that picture. http://images.tvrage.com/people/67/199399.png