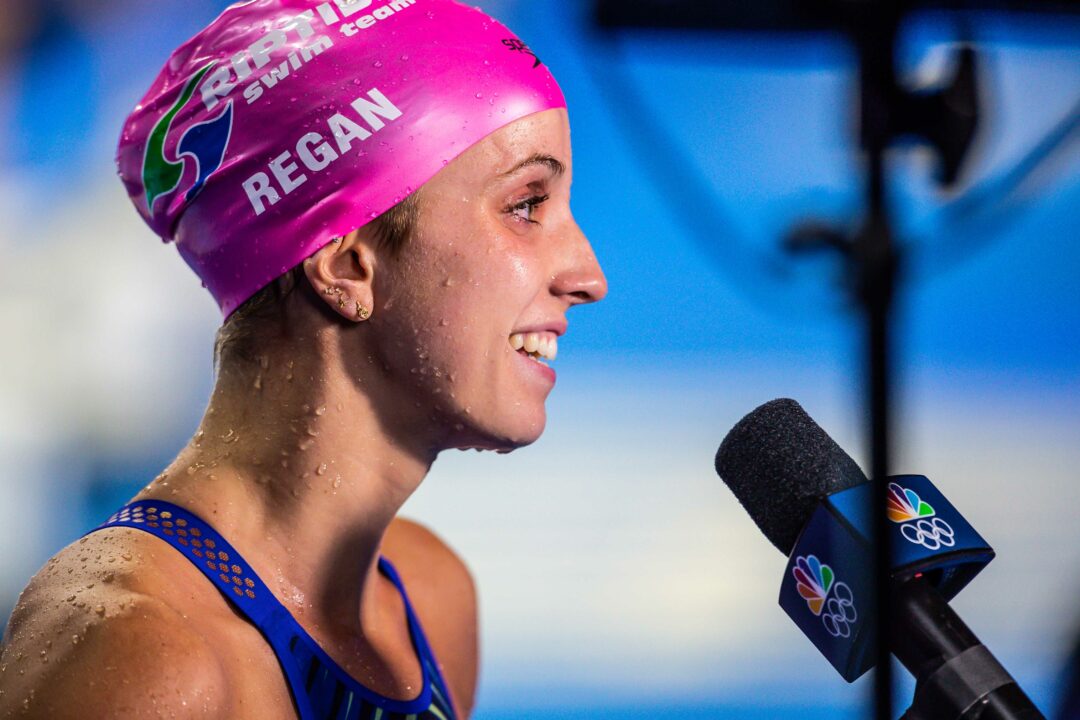 Regan Smith is a world champ and world record-holder - but now she can add "U.S. Olympian" to that impressive resume after winning tonight's 100 back. Current photo via Jack Spitser/Spitser Photography

Regan Smith is a world champ and world record-holder – but now she can add “U.S. Olympian” to that impressive resume.

Smith was one of three first-time Olympians locked into berths after night 3 in Omaha. Five more swimmers are likely to make their first Olympic teams, provided enough swimmers qualify in multiple events to keep the roster under the 26-person cap.

Smith won the 100 back tonight, beating arguably the toughest field of any event at these U.S. Olympic Trials. The time of 58.35 was well off her best, but Smith could breathe a sigh of relief after finally making her first Olympic team, almost two full stressful and chaotic years after she broke out on the international scene with two world records at 2019 Worlds.

Drew Kibler and Andrew Seliskar are locked into their first Olympic teams after placing 3rd and 4th, respectively, in the 200 free final. They’ll both swim on the 4×200 free relay, joining Kieran Smith (who booked his first Olympic trip on night 1) and Townley Haas. Haas was on the 2016 U.S. Olympic team in this 200 free.

Update: Jake Mitchell will also likely make his first Olympic team after an electric time trial of the 400 free tonight. Mitchell was 2nd in the 400 free final, but didn’t make the FINA “A” cut. He time-trialed the race alone in the pool after tonight’s finals session, going 3:45.86 and putting himself in line for an Olympic berth.

Here’s an overly-simplifed version of the U.S. Olympic selection process: the team can have a maximum of 26 men and 26 women. Swimmers are added to the roster in these priorities until the roster cap is hit:

The doubles are low right now, but that’s not necessarily unusual. There have only been 5 men’s finals and 5 women’s finals so far. Doubles usually grow exponentially as the week goes on. Tomorrow’s women’s 200 free final should provide several double opportunities, and the men have lots up for grabs on day 5 with the 100 free final.

Pianos dropping left and right on Team USA. What explains this dearth of in-form, in-prime talent? Perhaps the lack of attention span we have is decimating our athletes’ endurance.

I find it deeply unsettling that NBC is glorifying Lilly King’s bullying. The fact that she’s bragging about trying to psych out a 17-year-old in the ready room at her first Olympic Trials isn’t a cause for celebration but a problematic narrative. Truly admirable athletes respect their competition (especially their teammates!) and set an example for the young athletes. And to be clear, I would treat a male athlete with the same level of scrutiny.

if I were king I would not mess with the Alaskan. Still waters run deep and she seems like the kind of swimmer that’s going to hold that inside and use it. Yeah they’re all teammates but any swimmer will tell you they compete just as hard against a teammate as someone not on your team.

I’m usually supportive of King’s personality, but that crossed a line. As a premier American swimmer and a leader on the national team, she has a responsibility to support other US swimmers, especially ones that likely look up to her and don’t really pose a threat to her Olympic slot.

I don’t like her. Ew. Plus she disrespected Phelps. Double Ew.

What did she do?

Nothing, NBC just trying to make a story out of nothing

She brought it up to praise Jacoby on how she was able to get the job done even under that pressure.

Honestly King brought it up in a light hearted tone, and It seemed like an excuse to compliment Jacoby’s composure under pressure. King is too confident to be worrying about her competitors.

People who are actually confident don’t need to make entire commercials about how they psych people out. Being that vocal about it constantly reeks of insecurity.

Can you give us specifics? Who is making the accusation? Has the bullied person come out?

Da Youth on the Women’s Side!

Will we have an entirely teenage prelim medley relay?

Is Jake Mitchell the most clutch swimmer on Team USA? Passes like three guys on the final 50 to touch second after flipping 5th at the final wall, then takes his time trial 400 in a 1:49.8 TO THE FEET when he was 1:49.4 in the 400 free prelims, and manages to drop almost 2.5 seconds to make the Olympic team in a swim BY HIMSELF

the dude literally had nothing to lose

Anyone who calls King a bully has major issues. She wagged a finger at a PED user and said she likes to say wacky stuff in the ready room to psych people out. Until one of her competitors comes forward and accuses her of crossing the line you all really need to stop the silly bully narrative,

Thank you for this. I’m not always a King fan, but giving someone a bully label before fully knowing the nature of “I like to psych people out in the ready room” is a stretch. Just saw you’re not a fan/havebeen looking to knock her down a peg or two and move on.

Agree. As a swim fan you weren’t there in the ready room so I don’t think you have the right to judge until you know the full story.