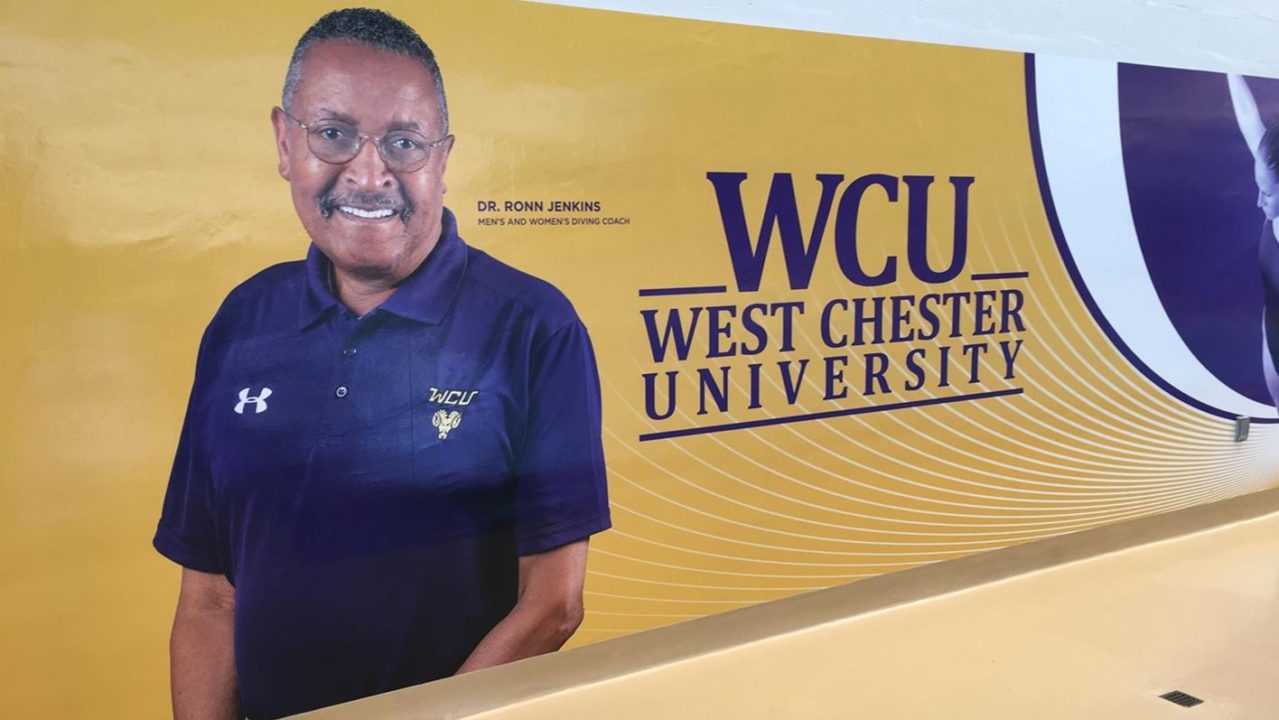 WEST CHESTER, Pa. – Legendary diving coach, Dr. Ronn Jenkins, announced his retirement from coaching the diving team at West Chester University earlier this week. He steps down after 49 years at the helm.

“As you are no doubt aware, I recently underwent heart surgery,” Jenkins started. “Coupled with the current pandemic and the college’s concern for its liability, my recovery compels me to consider what’s most important under these circumstances. The current world Covid-19 crisis has given me time for reflection and strong thoughts of my future.

“In my efforts to champion physical and mental health, I have neglected my own. I have decided, therefore, to make the best of the life I have remaining by retiring from my position as the University’s volunteer Head Diving Coach. It is my sincere hope that the diving team continues to enjoy the successes it has had under my tutelage.”

The longest tenured coach at West Chester University, Jenkins’ reputation in the diving community has grown exponentially over his coaching career, which began at West Chester University in 1972, to the point where he was appointed the coordinator of diving officials at the 1996 Olympic Games held in Atlanta, Ga. He served in the same capacity for the World Games one year earlier in Atlanta. Jenkins has also served as chairperson on the U.S. Diving Committee on Diversity from 1991-94 and was a member of the NCAA Swimming & Diving Committee from 1995-99. Jenkins was the 1995 NCAA Division II Women’s Diving Coach of the Year. Many of his students gained recognition as NCAA All-Americans and one, a two-time Olympian (1992 and 1996).

I want to thank Ronn for the many contributions he has made to our diving program and our department as a whole,” said West Chester Director of Athletics, Terry Beattie. “His commitment to excellence set him apart, and his legacy will continue to inspire student-athletes for years to come. I wish Ronn much health and happiness.”

Jenkins graduated from West Chester University in 1965 with a bachelor’s of science degree in Health and Kinesiology. He continued his education at Bucknell University, where he received a master’s of science in Counselor Education. The diving mentor completed his education with a doctorate in Educational Administration from the University of Pennsylvania. He also received special training at the United States Olympic Training Center Coaches College in the fields of Sports Psychology, Biomechanics, and Exercise Physiology.

He has dedicated his career to educational and athletic excellence. He began his professional life as Associate Director of Residence Life at Bucknell University, where he was also a volunteer diving coach as well as an Out Service Counselor for the Lewisburg Federal Penitentiary. In 1972, he returned to West Chester University to fill a variety of leadership roles, including Associate Professor, Associate Dean of Students, Interim Assistant to the President and Director of Affirmative Action, Director of the Academic Development Program and Chair of the Department of Educational Services and Academic Advising; he even taught in the University’s Department of Management. Jenkins is deeply committed to community service and was Chair of the Board of Directors at Chester County Head Start (1982-83), a member of the Chester County Boy Scouts of America Council (1972-73), and advisor to the West Chester Community Center.

Considered one of the top diving coaches in the country, Dr. Ronn Jenkins won a PSAC individual diving title while also capturing a Mid-Atlantic Conference diving championship during his college career. He was named the school’s most outstanding athlete in 1964. Jenkins also captured two Junior Olympic national titles during is diving days in the early 1960s.

Jenkins grew up in York, Pa., where he was the first person of color to join the local YMCA, learn to swim and dive, and credits this organization for laying the framework for his desire for always attempting to do the right thing. Above the wall at the YMCA’s pool was the slogan, “Self Discipline Breeds Excellence.” As a youth, Jenkins was not only an accomplished swimmer/diver, he was active as a youth officer in his church, and an Eagle Scout in his local Boy Scout Troop.

WHAT THEY ARE SAYING ABOUT DR. RONN JENKINS

Jamie Rudisill
Former Swimming & Diving Head Coach
West Chester University (1988-2017)
“For my 29 years at WCU, Ronn WAS the diving program. As a personal friend, as a godfather to my two son’s, and as an internationally known coach, he always gave freely of his love for the sport and his athletes, freely of his time and expertise, and even freely of his financial support in buying and refurbishing equipment and setting up a couple endowments. When I say freely, I mean he was an unpaid volunteer.

“Always there for his divers – both on the boards and personally – just weeks after heart surgery, he was still hosting the diving teams to his house for pizza and movie night, which they gladly attended.”

Steve Mazurek
Swimming & Diving Head Coach
West Chester University (2017 to present)
“When you’ve coached for a half century and you’ve done it better than anyone, chances are pretty good you’ve built a social network that rivals Facebook.  It’s impossible to go anywhere in this area without running into someone who knows Ronn. For a while I thought he was the mayor of West Chester who coached diving on the side.

“Ronn is a natural when it comes to coaching.  He’s got a great technical mind and his attention to detail is impeccable. Sometimes he made it look so easy, but those who knew him understood how hard he’s had to work for his success. He had to fight for his spot in the sport as an athlete and he had to fight to preserve opportunities for collegiate divers. He spent a career fighting for his passion. My hope is that he’ll finally be able to relax in retirement and enjoy connecting with the countless lives he’s touched.

“What an honor it’s been to coach alongside a coaching legend. A highlight for me was watching him coach Nadia Mulder to an NCAA championship in 2019. Ronn’s retiring at the top of his game — as the best coach in Division II Swimming and Diving. Period.”

Dr. Edward M. Matejkovic
Former Director of Athletics
West Chester University (1995-2017)
“We all knew this day would come at some point. This will leave void not only for the WCU divers, but all the young kids in Chester County and the surrounding area who have aspirations to be divers competitively. Ronn is a master coach and a great motivator, along with being an outstanding person who had genuine concern for everyone. Many may not know his accomplishments of being an Olympic Judge and an International leader among his coaching peers and all the students he touched as a professor and advisor. Everyone at West Chester University should be honored to have had Dr. Jenkins for all these years. What a treasure.”

What an awesome history! Congratulations good sir! Enjoy your retirement and stay safe!

I was most impressed by his self-awareness, regarding his health.

WCU isn’t far from where I live. Maybe when things open up again, I’ll try and pop over to grab an interview.

Well deserved and over earned!

You’re one of the few men where great seems an understatement.