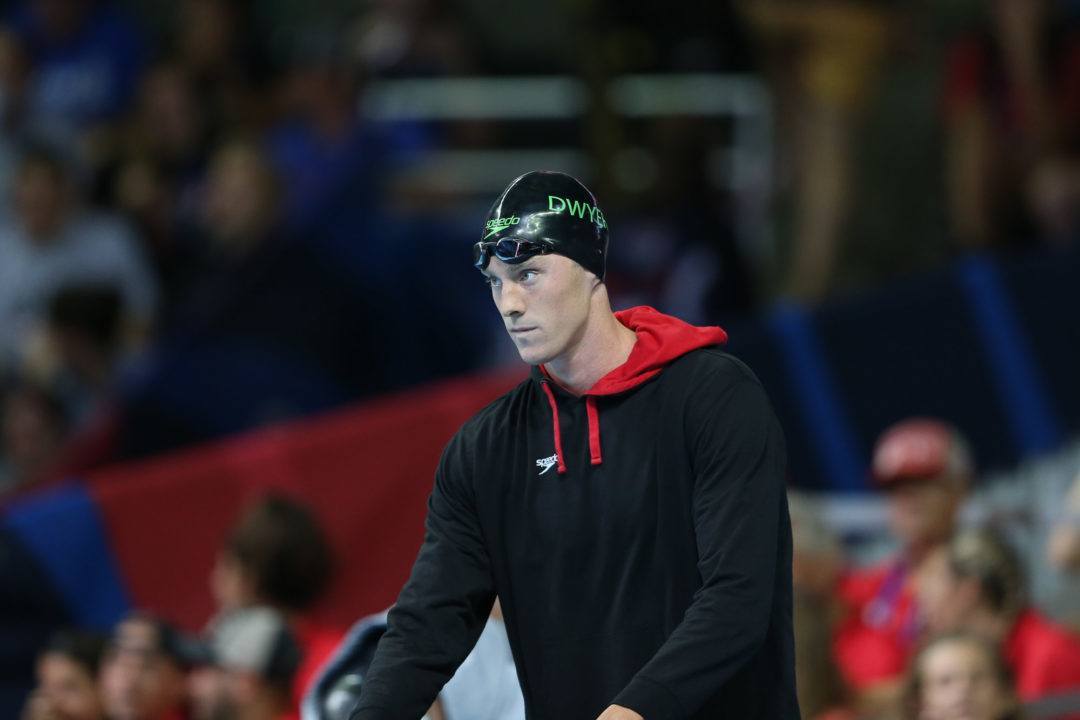 Until last summer, Conor Dwyer and Team USA had owned the 4x200 relay internationally for more than a decade. They'll have plenty of competition in Rio as they attempt to reclaim their title Current photo via Tim Binning/TheSwimPictures.com

Up until last summer, the United States had owned the men’s 4×200 free relay ever since their upset of Australia at the 2004 Olympics.  Every summer from 2004-2015, Team USA came away victorious at their top international meet, often by huge margins.  However, in a perfect storm of poor preparation, a year-in-advance selection process, Michael Phelps not making the trip to Kazan, and strong competition, the U.S. saw their historic run come to an end.

Last summer, it was Great Britain who managed to pulled off the stunner, thanks to a 1:44.74 anchor leg from 20-year-old star James Guy.  Three of the four legs from that relay–Guy, Dan Wallace, and Robbie Renwick–will be competing in Rio, but their finals squad participants remains to be seen.  Guy and Renwick are virtually shoe-ins, though Wallace finished in seventh place at British Trials in 1:48.50 after a 1:47.04 leadoff leg last summer.  Stephen Milne, traditionally more of a distance swimmer, back-halfed his way to the second place slot at Trials in 1:47.15, but won’t be competing in the individual 200 in Rio.  Rising star Duncan Scott finished fourth at Trials (1:47.31), but is not on the “official” Rio entry list to compete.  Fifth-place finisher Cameron Kurle (1:47.82) will be Britain’s second individual Olympic representative.

This British quest for gold in Rio will be a steeper one than 2015.  Not necessarily because their squad is worse; their primarily competition is just better.  Even with their dismal performance in Kazan, the United States are the favorites.  Four Americans have been under 1:45.8 in the past year, while Australia is the only other country with more than one swimmer under 1:46.4.  Remarkably, that doesn’t include Michael Phelps, who’s a shoe-in for a sub-1:46 split, even on an off day.  The new-found hope in American middle distance swimming is attributed to Longhorn training partners Townley Haas and Jack Conger hitting their stride at the right time.  Add in stalwarts Ryan Lochte and Conor Dwyer, and the U.S. is tracking to once again challenge the 7:00-barrier.

Australia–bronze medalists in Kazan–is still on the a rebound from a five-year lull where they didn’t win a medal at a World Championships or Olympics, though with the ascendance of Cam McEvoy alongside the experienced trio of Thomas Fraser-Holmes, David McKeon, and Daniel Smith, they’ll give the British squad all it can handle.

Russia would have been in the medal mix, but may be stuck on the outside looking in following the recent inelibility penalties levied by FINA.  While Danila Izotov and Alexander Krasnyikh (arguably their two fastest) are still on the squad, now-banned Mikhail Dovgalyuk and Nikita Lobintsev were both expected to compete on this relay.   Russia will have to rely on their 5th and 6th place finishers from Trials: Vyacheslav Andrusenko and Alexander Sukhorukov.

Japan missed the Worlds championship final in 2015, but with the ever-versatile Kosuke Hagino back in full form from an elbow injury that kept him out of Kazan (he was 1:45.50 in April), expect them to make the top 8 with ease, and be in the running for a medal.  Yuki Kobori, Daiya Seto, and the seemingly-ageless Takeshi Matsuda will all battle with Naito Ehara, who put together a breakthrough 1:46.66 at the KONAMI Open in February, for the final three relay spots.

One big unknown: China.  While the Chinese delegation is not sending any “relay only” 4×200 participants to Rio, they have the talent to put together a solid team.  In addition to Sun Yang, Wang Shun (1:47.3 earlier this season), Shang Keyuan (#2 qualifier in the individual 200), and Qiu Zhao (3:47.99 in the 400 free) will all be competing individually in Rio.  Should the Chinese choose to put a relay together that includes Sun Yang (he didn’t swim the 4×200 in Kazan), they should push for a finals slot.  For now, though, we will leave them out of our rankings.

And then there’s the French.  Back in 2011, with a young Yannick Agnel and Jeremy Stravius at the helm, France appeared to be the only team who could legitimately give the U.S. a run over the next five years in the 800 free relay.  The French finished a distant second in London, but their 7:02.77 was one of the top non-U.S. times in history, and given Agnel was just 20 years old at the time, there was no question the future looked bright.  Since then, however, France has struck out, failing to medal at 2013 Worlds and 2014 Euros, and completely missing the championship final last summer.  Agnel and Stravius are still around, and while a finals appearance is in play, the outlook in Rio isn’t what fans may have expected coming out of the previous Olympic Games.

Four other European teams will be in the hunt positions in the championship final:

Morgan China won’t swim 4×200 as they have not qualified. Also Italy specially and Brazil may try to find a spot on final with Germany Netherlands and Belgium

Agree with the order not the times.

This is not a prediction. These are the fastest times for athletes from these countries for this year.