Reports: Queens University (NC) Will Vote on Move to D1 This Week 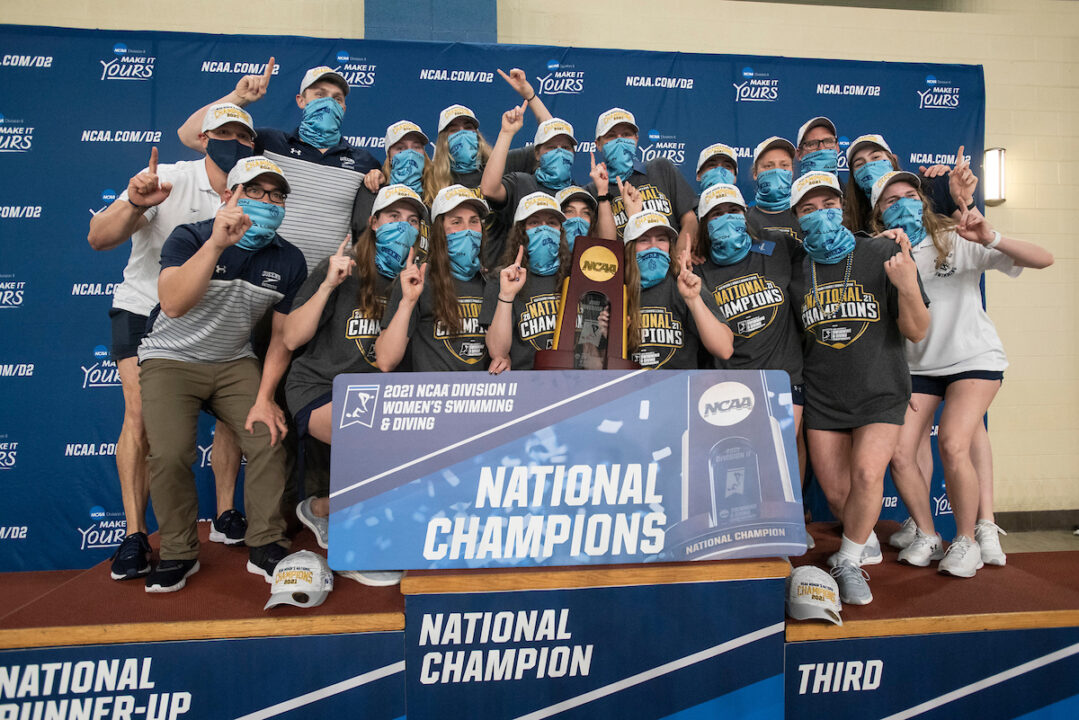 Queens University is the dominant swimming program in NCAA Division II athletics, and the school plans to vote on a possible move to Division I. Archive photo via Queens Athletics

Queens University in Charlotte, North Carolina will vote this week on a possible transition to NCAA Division I athletics, according to CBS Sports college basketball reporter Jon Rothstein.

Sources: Queens University of Charlotte (Division II) will vote this week on a possible transition to Division 1. Have received interest from the Atlantic Sun, Big South, and others.

The move would send shockwaves through collegiate swimming, as Queens has won the last 6 consecutive men’s and women’s NCAA Division II championships in swimming and diving.

The program was launched for the 2010-2011 season and benefitted from an early association with David Marsh, who was the architect of the Auburn swimming dynasty of the 2000s. Marsh was training his pro team, Team Elite, out of the Queens pool, and sparked success for the team when he funneled one of his best SwimMAC high school prospects Matthew Josa to the program.

The program has had only one official head coach in its history: Jeff Dugdale, who swam under Marsh at Auburn.

The program is the dominant one in Division II swimming, but will face a different landscape if the move to Division I is successful.

They will go from the top of the pile in Division II to having to fight to stand out with recruits among other mid-major programs in Division I. With NCAA policies on changing divisions keeping teams from competing in NCAA Championships during their transition periods, that would circuit-break some of the momentum the swimming program would take to Division I.

Queens University had an undergraduate enrollment of 1,670 for fall of 2020 – the last semester unimpacted by the COVID-19 pandemic. While the move to Division I is likely part of plans to grow, current enrollment would make the school likely the second smallest Division I school behind only Presbyterian College in South Carolina.

Queens is a Presbyterian-affiliated private university that was founded in 1857. The school changed its name from Queens College to Queens University in Charlotte in 2002, part of a large-scale expansion of educational offerings over a decade.

The school has currently 18 varsity programs and no football team. The Levine Aquatic Center on-campus has an 8-lane, 33-meter stretch pool.

The men’s basketball program is also a strength for Queens. The team is 20-3 this season and ranked #17 in NCAA Division II.

The school’s basketball teams play in the same facility in Curry Arena, which has a capacity for 2,500 spectators. While not the smallest arena in Division I, that would put them in the smallest 10% of arenas. They averaged just over 500 spectators per game in 2020.

All of the school’s NCAA titles have come in swimming and diving.

Queens isn’t the only swimming school considering the leap to Division I: Southern Indiana University voted this week to pursue a move. The school is building a new on-campus aquatic center and launching a new swimming program next season.

They’ll have to stop relying on European veterans and get some high school talent. I don’t mean this as a knock–they’ve done what the rules allow in DII. But they won’t be able to carry their roster full of 24/25 year-olds up to DI. On the other hand, they have an established foreign recruiting network, which can definitely benefit them if it yields age-appropriate talent. IU certainly has had a lot of success from foreign swimmers.

Regardless, I don’t see this as a good move for their swim teams. The Carolinas are flush with top-tier DI swimming schools and other ACC/SEC schools aren’t that far away, so local recruiting will be hard. Compare that to the area around NAU:… Read more »

Is this true though? Like is there a rule stating only a certain number of swimmers on a roster can be above a certain age at DI? I was under the impression that if the athlete met the NCAA requirements, the age did not matter (at least on the higher end).

idk about the current practice but during the early 2000s St. Francis in Brooklyn (a D1 school) had a solid chunk of Eastern Europeans more in the 22-25 range making up the core of their water polo team

yeah, i don’t know what the official rules are, but whenever we would compete against queens, we had several questions about their 23 year old sophomores.

Eh… that’s assuming there is Athletic Department support to do so. Just because they can per the rules doesn’t mean they will.

Do we have past examples of schools moving up to d1 and how they fared?

They are more popular with high school pools. Many of the high schools in the Ann Arbor area have them. You can more easily run diving and swimming simultaneously and it gives you more lanes when you swim the width.

There are at least 6 other schools currently reclassifying from D2 to D1.

In general, there aren’t many recent grand success stories. At least one school, Savannah State, went back to D2.
Incarnate Word moved in the early 2010s from D2 to D1. They’ve been fairly successful in swimming & diving at the mid-major level. The men won the 2020 CCSA Championships. That’s probably the most optimistic example – though they have the benefit of being one of the few men’s D1 swimming & diving programs in a huge state.
UCSD is the most recent example, though COVID has made it hard to really figure out how they’re faring so far. Another Marsh-linked team.

GCU Men sent relays to NCAAs, had an individual All-American, and won the WAC.

Yep, another good one.

on your question about 33m— if i’m not mistaken 33m is the pool course for a game of water polo. i don’t think the east coast sees much polo, but i’m thinking that’s where the number came from

I don’t know of any association that mandates a 33 meter pool. In FINA competition, men play in a 30 meter pool and women in a 25 meter pool. So 33 meters does allow them to host FINA-caliber water polo.

Awfully nice for Steph Curry to donate to Queens for their basketball arena.

Since you asked, it’s named after Beth Curry, who co-founded Eagle Capital Management – a $25 billion investment firm – and with her husband the Ravenel and Elizabeth Curry Foundation – a $180 million philanthropy.

As of the time of her death in 2015, the foundation had donated about $3 million to Queens, her alma mater. She graduated with a degree in English in 1963.

Probably better to be a big fish in a small pond.

And have 23 year old sophmores…