All-American Erge Gezmis Will Transfer From NC State Next Season 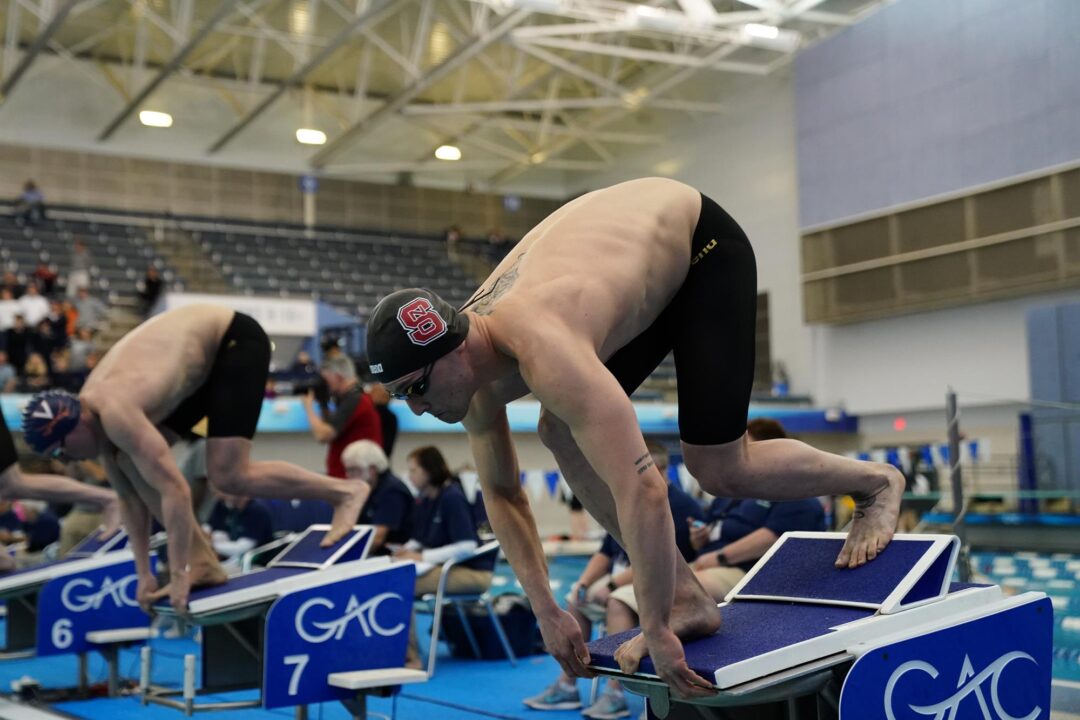 Gezmis, who was NC State's highest scorer at the 2021 ACC Championships, is sitting out the 2021-2022 season with a shoulder injury. Archive photo via NC State Athletics

NC State All-American Erge Gezmis has entered the NCAA Transfer Portal with the intention of transferring next season.

Gezmis was an All-American in 2021 as a member of the Wolfpack’s 800 free relay, and previously in 2020 as an NCAA qualifier in the 200 IM when the NCAA Championships were canceled. The CSCAA awarded All-America honors to all athletes who qualified for the meet that year.

He scored 71 points individually at the 2021 ACC Men’s Swimming & Diving Championships. That made him the team’s highest scorer en route to a runner-up finish for the Wolfpack.

Gezmis started his career at the University of Florida before making his NC State debut in January of 2020.

He has one season of eligibility remaining: the bonus 5th year that has been awarded to NCAA Division I athletes who competed in the COVID-impacted 2020-2021 season. This year only, athletes using a 5th year don’t count against scholarship limits (unless they transfer). In future seasons, they will.

This season was supposed to be his final year of eligibility, but Gezmis injured his shoulder in October (biceps tendon SLAP lesion) and underwent surgery. He is taking a medical redshirt this season and plans to complete his undergraduate degree in May.

Gezmis tells SwimSwam that after having a conversation with NC State head coach Braden Holloway regarding the team’s limited budget, he decided to transfer and use his final season of eligibility to begin graduate school somewhere else.

Gezmis is a native of Turkey, where he has represented his country at several continental and World Championship events. That includes most recently the 2019 World Aquatics Championships, where he finished 33rd in the 200 free and 27th in the 400 free.

In his two years at NC State, Gezmis saw a bit of an event focus away from the 500 free and toward the IMs. While he didn’t swim the IM races at Florida, he did have international experience in those events, including at the 2015 World Junior Championships.

Gezmis says that he returned to training in January and plans to return to competition this summer. He is majoring in Business with a concentration in Supply Chain, and plans to pursue his master’s degree in international business or supply chain program,s.

Timing for these grad transfers is odd. Basically if you want money you’d have to decide way earlier than now. Most schools are pretty much out of money for next season at this point, all promised to current team members or incoming freshmen. You basically have to decide to switch schools a year out unless you find a coach who planned for someone like this which is pretty risky.

I recommend taking a look at DII schools. It’s possible to get a fantastic education and be a national qualifier at a high level. It would really be a huge boost to a team as well.

Not to be snarky, but what are considered to be the top academic D2 programs? With UCSD having moved to D1, I don’t really know of any.

But yea, from the swimming side of things, if he wants a large/full scholarship and a guarantee to be able to swim at nationals D2 might be the route to go.

I am always wary of comments that begin with “Not to be snarky.”

Fantastic education is what I said. Are you saying that UCSD was the last real educational institution left in DII?

Correct. Is he wrong?

Time to reduce the number of football scholarships and invest in swimming!

I feel like we need a different word than “transfer” for people who are graduating and using their eligibility at graduate school.

I agree! The problem these post grads/Covid 5th years is that their scholarship counts against the team’s 9.9/14.0 total.

They don’t this year, if they stay at the same school.

In future years, they will.

They count towards the scholarship total if they transfer (just double checking)?

Rationale makes sense. Gotta wonder how these kinds of top schools with 15-20+ NCAA qualifiers including Olympians and World top 10 swimmers make it work with 9.9 scholarships. I assume Internationals aren’t eligible for need based aid either like US swimmers may get. Good luck Erge!

Some international swimmers do receive funding from their home countries, ex. 0% loans or Grants and other sorts of funding

Really? Have there been any articles about this? Genuinely asking. I would be interested to know more. Seeing how many international students show up as 20-21 year old freshman, it would be interesting to learn how home countries support them in the ncaa and how they may not be eating up the limited scholarship money we do have. Thanks!

Bobby Guntoro described on a podcast about getting support from Indonesia to go to both Bolles and UNCW as an elite athlete. I’m sure there are more examples.

There could be some fancy paperwork as a lot of schools LOVE diversity, maybe offering “academic scholarships” on paper rather than athletic.