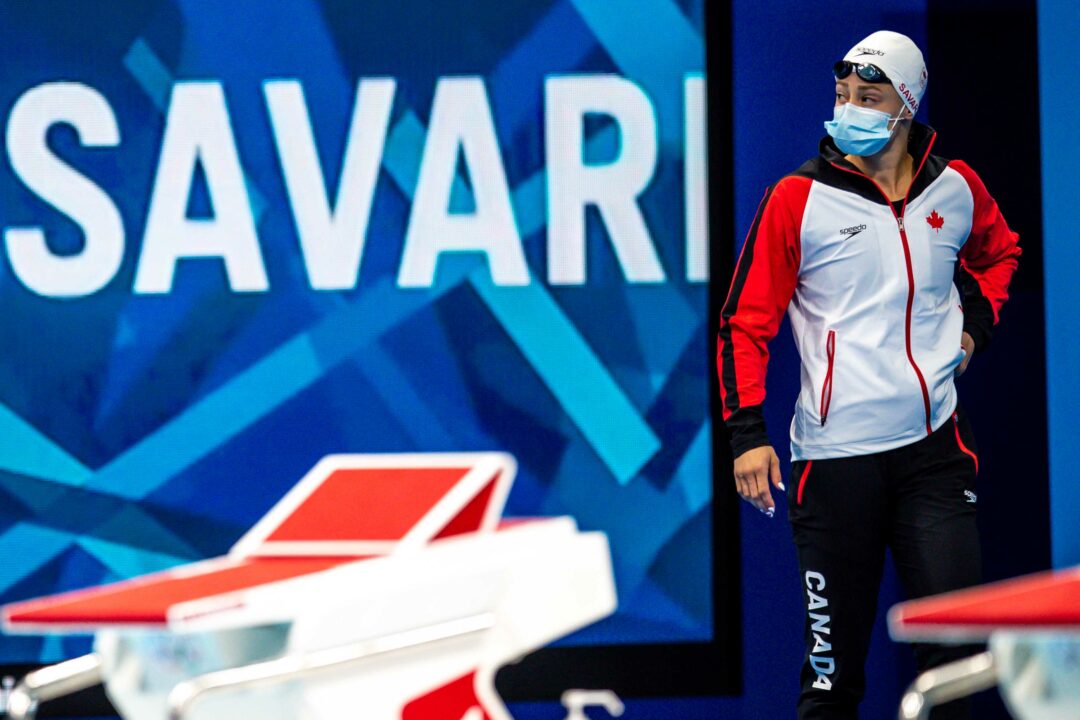 Canada left both Maggie MacNeil and Penny Oleksiak off of the mixed medley relay prelims, gambling on the team making the final without them. Current photo via Jack Spitser/Spitser Photography

We’ve got relay lineups for today’s mixed 4×100 medley relay, giving us at least some hints as to what each nation will do in the medal final on Saturday morning local time (or Friday night U.S. time). Here’s a look at all of the lineups with some of the more significant decisions unpacked:

Both Great Britain and China appear to be swimming their top lineups (or very close) in heats – it wouldn’t be surprising to see either take down China’s world record in the prelims. China really doesn’t have any other good lineup options; Great Britain could theoretically still try to work Duncan Scott in on freestyle in the final, though it’d require using Harriet Jones on fly after she was just 21st in the individual 100 fly heats. If not, they’ll still probably swap freestylers from Freya Anderson to Anna Hopkin, who has been faster so far at these Olympics.

The Netherlands pretty much have their best lineup, although they can probably sub out Ranomi Kromowidjojo in favor of Femke Heemskerk on free for the final.

Team USA‘s lineup still leaves quite a bit of mystery. Caeleb Dressel should be on the finals relay for fly or free. It’s likely the U.S. also swaps one a male breaststroker for one of Lydia Jacoby or Lilly King. The choice between King and Jacoby is an interesting one. King has the faster time overall this year (1:04.7 twice at Olympic Trials), but Jacoby beat King in the 100 breast final for gold, going 1:04.9.

They’ll have the option of switching out Regan Smith for Ryan Murphy on backstroke – using Smith this morning might be giving her another shot at the 100 back, which was her first Olympic event in an intense spotlight for the 19-year-old. She won a better medal (silver) in her off-event 200 fly than in her primary 100 back (bronze), so there’s a chance Smith pops a big swim here with the pressure a little lower.

Michael Andrew is not on this relay – he’s an option to swim breast or fly as a major gamble. They’re probably allowing Andrew to rest up for the 200 IM final, and he may be the big name left off this relay in the final, unless Team USA is really going outside the box and swimming without Dressel to spare him a double with the men’s 100 fly final.

Australia went full off-lineup. They’ll almost-certainly use Kaylee McKeown on backstroke in the final, and should use Emma McKeon as their other women’s leg on either fly or free. McKeown/Matthew Wilson/McKeon/Kyle Chalmers probably makes the most sense after Chalmers’ stellar 46.4 free relay split and without seeing male flyer Matthew Temple swim his 100 yet.

Russia isn’t using either of its stud backstrokers who swept gold and silver in the 100. That probably suggests they’re saving Evgeny Rylov and Kliment Kolesnikov for the final of this relay, with gold medalist Rylov leading off and Kolesnikov swimming free. That would leave Evgeniia Chikunova on breaststroke and probably Svetlana Chimrova on fly.

Italy isn’t using 4th-place backstroker Thomas Ceccon, which could be a gamble – they’ll be in a tough fight to make the final, but if they get in, Ceccon is a very nice boost to that relay.

Canada is also making a bit of a gamble with a very “off” lineup. They could, realistically, swim the same M/M/F/F order in the final, but swap out three of the four legs. Javier Acevedo will lead off today despite not swimming in the individual 100 back; Markus Thormeyer was about half a second off his best in heats of that event. There’s no 100 fly gold medalist Maggie MacNeil in heats, nor is there 100 free finalist Penny Oleksiak. Thormeyer, MacNeil and Oleksiak are all likely to join this relay in the final – if they can make the top 8 this morning.

I simply cannot understand this. Why are they gonna put Dressel on the anchor in the final? That’s never a winning combination, and even then Apple on a rolling start can probably outsplit Dressel. Finals lineup should be Murphy-Jacoby-Dressel-Weitzeil.

Great Britain will be swapping Anderson for Hopkin in the final. Hopkin almost 1 full second faster than Anderson at the meet so far.

I think GB’s line up will definitely change to include Hopkin as opposed to Anderson in the final. Based on swims this week that’s worth about 0.5.

As for Zapple, one great relay split, one dismal relay split (albeit not the distance in question), and one mediocre-to-poor (considering his relay split) individual 100 free. Not sure I’m ready to hand him the keys to the car again. But, if he’s in there, you can bet he’ll give it his all.

If USA gets 4 men can Australia have two freestyle legs instead of breast? That would solve a lot of our problems.

Why Canada picked Smith over Sanchez? Sanchez was faster from flat start than Smith was from flying start in both heats and the final of the 4×100 free relay and she swam faster than her times there in the individual 100 free.

I wouldn’t say Canada is gambling anything. They have no chance of medaling here with the men’s side as weak as it is, so the big guns are best served conserving energy for the important races.