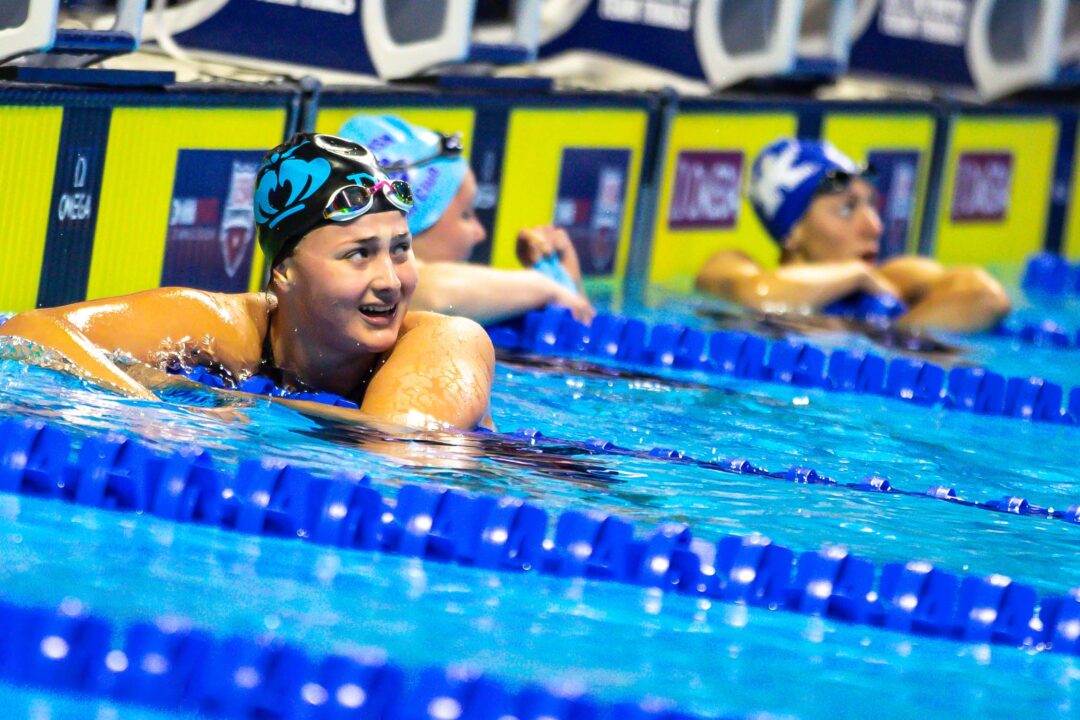 Despite being a relatively small class, Michigan picks up two of the top 12 recruits in the class in Letitia Sim and Lindsay Flynn, who both figure to make an immediate impact in Ann Arbor.

Sim was a revelation in her senior year of high school, launching from #16 in our 2020 class rankings up to #4 this year by hitting some monster best times.

Joining Sim is sprinter Lindsay Flynn, who is among the class’s best in the 50 (22.03) and 100 free (48.15), and has proven that she can further elevate her game on relays. Flynn delivered three 50-yard relay legs within the 21.46-21.57 range in March at the same meet, making her an extremely valuable commodity for the Wolverines come Big Tens and NCAAs. Despite a 21.1 split from Maggie MacNeil, Michigan only placed 16th in the 200 free relay at the 2021 NCAAs, so Flynn will be a welcome addition.

Multi-time Colorado 5A State Champion Kathryn Shanley adds a strong distance free presence to the mix, with her 1650 PB of 16:22 three seconds under the NCAA invite time from last year. Shanley’s 1:47.4 and 4:46.1 200 and 500 times will also put her into the battle for Big Ten ‘A’ finals in her first year.

UNC will get a huge boost this season after dropping from fourth to eighth at last season’s ACCs, bringing in a class that has a little bit of everything.

In-state pickup Katie Rauch is just hundredths shy of last season’s NCAA cutline with her 1:55.1 200 back best, and she’s also an elite freestyler—her 4:46.2 500 would’ve made the ACC ‘A’ final last season.

The team’s top breaststroker Lilly Higgs is entering her senior season, making the addition of Skyler Smith all the more crucial. Smith, a San Jose, Calif., native, is on the verge of an NCAA cut in the 100 breast (1:00.35), with her 200 currently sitting at 2:14.29.

Notre Dame adds a sneaky-good class with four swimmers either under or near last season’s NCAA cutline.

Carmel Swim Club product Madelyn Christman swam her way up into an Honorable Mention in our individual re-rank this year after progressing down from 54.4 to 53.2 in the 100 back and 1:57.1 to 1:54.8 in the 200 back. Those two events, along with her 1:59.2 200 IM, would’ve been in the ACC consolation final last season, and are right on the cusp of being in the top eight. Christman has also broken 23 seconds in the 50 free, making her a shoo-in for the team’s 200 free relay.

Long Island Aquatic Club’s Sophia Karras primarily focused on long course last season, but comes in with a 16:20 mile that’s well under the NCAA invite time (16:25) and is easily a top-eight scoring swim at ACCs. Notre Dame has a pair of women in a similar range (rising seniors Madeline Laporte and Samantha Eyolfson) who will make good training partners for Karras, who also has a 4:48.1 500.

The ever-versatile Mariah Denigan leads Indiana’s class after taking a huge step forward last season, dropping her 400 IM (4:08.35) and 1650 free (16:10.05) by four and 16 seconds, respectively, both well under the time required to score at NCAAs last season.

Denigan is also a 4:42.6 in the 500 free, giving her three top-tier events that will score at NCAAs, and we can’t overlook her scintillating 9:36 1000 free either. After breaking out in long course in 2018, Denigan took a few years to catch up in SCY, but has found the next gear and is entering college riding a ton of momentum.

The rest of the Hoosier class has a ton of depth, with several names just on the cusp of breaking out and being impact swimmers.

Hwee, who won’t join the team until the second semester, owns a 16:39.7 LCM 1500, giving her that 16:20 conversion that’s more than five seconds under the NCAA invite time from last season.

Along with Crawford, Indiana has also added developmental breaststrokers Kabria Chapman and Emma Shaughnessy, both of whom have 100-yard times in the 1:02-range and will be in good hands as IU has emerged as a breaststroke factory in recent years.

The team has also continued its diving pipeline by adding four new names to its roster, giving the Hoosiers a total of 12 divers in 2021-22.

Will be interesting to see what rauch can do after not swimming well in the last 1.5 years. Hope UNC can bring her back.

Georgia should be top 3 for sure

14
-7
Reply
Just give the trophy to the condors already

Does swimswam hate smaller recruiting classes even when they have incredible talent? Only reason that certain schools like umich and some of the honorable mention schools to be ranked so low

Just with Sim and Flynn, Michigan should be 100% ahead of everyone here except Indiana, there’s no reason that a 59.01 100 breastroker and 22.0/48.1 freestyler shouldn’t be viewed as enormous individual and relay potential, and should easily be ahead of UNC and Notre Dame

Yes, Sim is an immediate impact

I agree. 59.01 is extremely fast and Flynn dropping 21 mids is incredibly valuable.

Those two might cut 4+ seconds off Michigan’s 400 medley relay and, amazingly, that will probably still leave them in 4th place. Could four teams be under the record in that event this year? There’s so much fast swimming going on it blows my mind!