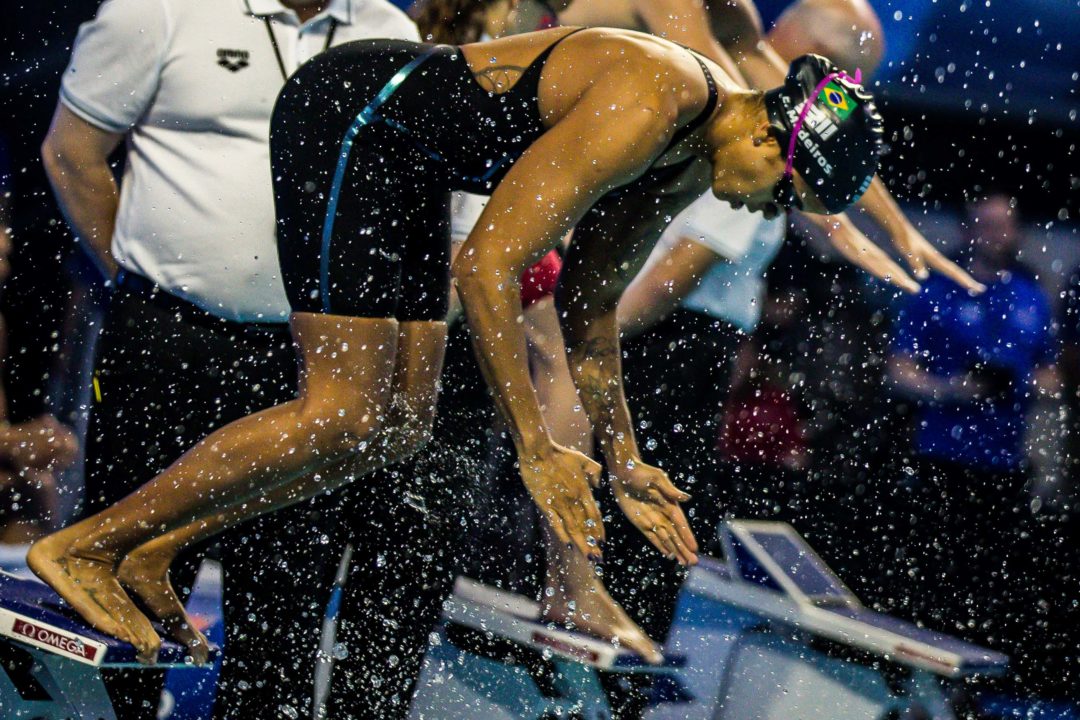 Medeiros tore her ACL while in Rome prior to the Olympics, and received medical clearance to compete in Tokyo despite the injury. Archive photo via Janna Schulze/SwimSwam.com

Andres Dupont, #15 in Class of 2022, Gives Verbal Commitment to Stanford

Andres Dupont, a 44.0/1:35.6 freestyler from Mexico, has announced his verbal commitment to Stanford’s class of 2026.

Roberto Bonilla, the top 400 IMer in the high school class of 2023, has verbally committed to the in-state Aggies.

Two-time Brazilian Olympian and former world record holder Etiene Medeiros underwent surgery on Monday to repair the anterior cruciate ligament (ACL) in her right knee, an injury she sustained prior to competing at the Tokyo Olympic Games.

As reported by UOL Esporte, Medeiros was injured while with the Brazilian team at their pre-Olympic staging camp in Rome, shortly after the Sette Colli Trophy, held in late June. Brazilian outlet Best Swimming added that Medeiros’ injury was sustained due to a fall from a scooter.

Medeiros, who qualified to compete individually in the women’s 50 freestyle in Tokyo, received medical clearance to compete at the Olympics. Emergency surgery was not required, clearly, and the Brazilian team had hoped that pulling her out of training would lead to it not being necessary, but ultimately it was deemed that it was.

The 30-year-old finished 29th in the 50 free heats at the Games in a time of 25.45, exactly one second slower than her South American Record of 24.45 set five years earlier at the 2016 Olympics in Rio—a swim that qualified her for the Olympic final, where she finished eighth.

Medeiros also split 55.42 in the women’s 4×100 freestyle relay prelims for Brazil, the fifth-slowest split with an exchange in the field, as the team placed 12th.

The 2017 world champion and former world record holder in the women’s 50 backstroke was operated on in Sao Paulo on Monday, and was discharged on Tuesday. She is expected to be out of the water completely for at least a month doing physiotherapy, and if everything goes as planned, she’ll be able to return to competition in February or March 2022, at the earliest.

The injury has kept Medeiros out of Season 3 of the International Swimming League (ISL) and the Jose Finkel Trophy, which was Brazil’s qualifying meet for the upcoming Short Course World Championships.

Best Swimming‘s Alex Pussieldi noted that the recovery timeline could allow Medeiros to compete at the 2022 Long Course World Championships in Fukuoka, scheduled for May, though she would need to be ready to race at a high level one month earlier in order to qualify at the Brazil Trophy.

Dang, I wondered why she was slower. Hoping for a speedy recovery