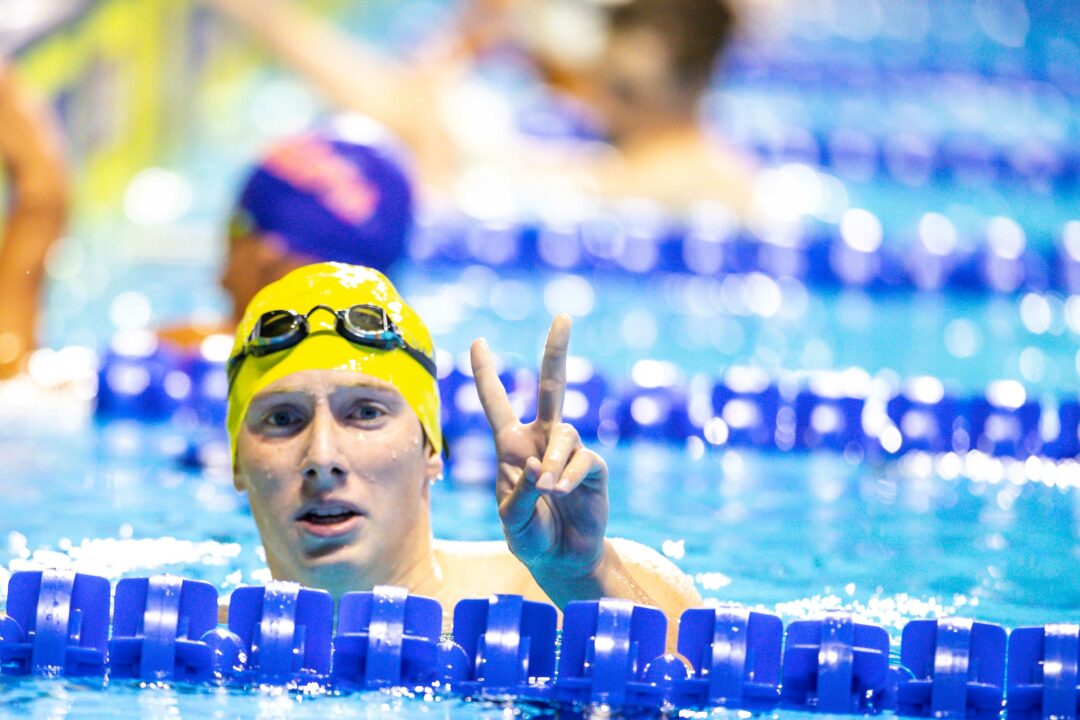 USC commit Daniel Matheson is a massive get for the Trojans, with elite abilities across freestyle, butterfly and IM. Archive photo via Jack Spitser/Spitser Photography

After being completely absent in 2020-21 due to redshirting their entire roster, the Arizona State men return this season revamped and ready to roll. This ranking doesn’t factor in all of the redshirt freshmen the Sun Devils have on their roster this season (eight to be exact), which includes Puerto Rican IMer Jarod Arroyo and distance freestyler Lleyton Plattel.

Highlighting the ASU class is Frenchman Leon Marchand, who has been on a tear of late, including a sixth-place finish in the 400 IM and 14th-place showing in the 200 fly at the Tokyo Olympic Games.

One of the best 400 IMers in the world with his 4:09.65 long course best, Marchand’s 3:39.1 converted time would’ve been fourth at the 2021 NCAAs, and once he’s accustomed to racing SCY, it’s easy to imagine him being a champion in the event sooner rather than later.

Pushing the Sun Devil class over the top and into the top eight was the recently-announced addition of David Schlicht, who comes over from in-state rival Arizona after two seasons with the Wildcats.

The Australian native will join forces with Marchand to form a deadly duo in the medley events. Schlicht was fourth in the 400 IM at NCAAs last season and sixth in the 200, scoring 28 points, and he also took 10th in the 200 breast at the 2019 NCAAs in what remains his PB of 1:52.33.

The additions of Marchand and Schlicht alone are truly massive for Arizona State, capable of legitimately scoring ‘A’ final NCAA points in six events combined, but that’s not all their class has to offer.

They’ve also got a few more intriguing international recruits in Switzerland’s Tiago Behar and Ireland’s Ethan Hansen. Behar will likely primarily focus on freestyle, with his 50.9 LCM time converting to 44-mid, while Hansen has a solid 2:02.0/2:03.4 200 fly/IM combo, making him an ideal training mate for someone like Marchand.

USC’s recruiting class is one of those where it’s tough to leave anyone out of the “Top-tier addition” portion, as they’re all talented enough to come in and make their presence felt from the get-go.

The Trojans also nabbed deadly freestyle sprinter Artem Selin out of Germany, who projects to be the team’s fastest 50 freestyler this season. Selin owns a blazing LCM best of 21.83, which converts down to 18.94, the time needed to finish fourth at last season’s NCAAs. He’ll also be a shot in the arm to the USC 200 free relay and give them a strong medley anchor.

Selin isn’t quite as established in the 100 free long course, with his 49.9 converting to 43.5, but given that drop-dead speed, it seems likely he’ll be tailor-made to rip some fast 100s once he adjusts to SCY.

USC also picks up a monster transfer in Trent Pellini, a grad student out of Purdue who was an NCAA consolation finalist last season in the 100 breaststroke.

Another breaststroke add for the future comes in the form of Chris O’Grady, who entered the 2021 calendar year with a 100-yard PB of 56.97 and then hit a 53.62 in April. He’s also been sub-2:00 in the 200 breast and 1:37.5 in the 200 free, and with Pellini and Mario Koenigsperger nearing the end of their college careers, O’Grady will be a crucial sprint breaststroker in future seasons.

It will also be the team’s first full season with Harry Homans, who transferred over from Georgia midway through last season. Homans didn’t race at NCAAs last year, but his best time of 1:42.0 indicates he could be an individual scorer in the 200 fly.

Kevin Sichak (47.6), Mason Morris (48.9/1:47.4) and Mateo Parker (48.4) bring a ton of fly depth with them, and all are solid sprint free prospects with potential for relay contributions down the line.

Third-ranked Jack Aikins leads a very strong class for UVA that was bolstered by the addition of Alabama transfer Matt King, one of the fastest freshman freestyle sprinters in 2020-21.

Two of the three swimmers that have been faster than Aikins before their 19th birthday in the 200 back won NCAA titles—Ryan Murphy and Austin Katz—and his swims at the Olympic Trials this summer further indicate he’ll be a strong performer when the pressure is on.

That 1:39.8 will put him right into the NCAA ‘A’ final, his 100 back will challenge for a second swim, and his freestyle times make him a go-to guy on any relay.

King was 18.9/41.6 in the sprints for Alabama last season, leading the team in scoring at the SEC Championships. He bounced back after being DQed in the 50 free heats to take sixth in the 100 free final at NCAAs, with his fastest clocking of 41.63 making him the third-fastest freshman ever.

The UVA free relays were already in good shape last year with fellow rising sophomore Matt Brownstead coming off a big freshman campaign and August Lamb proving to be a big relay player, but adding King into the fold takes them to the next level.

Venturing outside of freestyle, Max ‘Scooter’ Iida was a major riser over last season, vaulting himself into the conversation of the class’s best domestic 200 IMers with his best of 1:44.86, seven-tenths outside of the 2021 NCAA cutline.

Iida (53.2/1:59.7) and Daniel Worth (53.0/1:57.5) make up a high-end breaststroke duo for the Cavaliers, both set to join Noah Nichols as the team’s best breaststrokers after the departures of Keefer Barnum and Matthew Otto.

The Crimson Tide bring in a diverse class with several international recruits ready to make an impact and a few Americans on the upswing.

The top domestic recruit comes in the form of 2021 Honorable Mention Mateo Miceli.

Miceli progressed into a backstroke/butterfly weapon in his senior year of high school, and now finds himself just over a second outside of an NCAA invite time in the 200 fly (1:44.86) and seven-tenths off in the 100 (47.01). The Omaha native also has 47.7/1:44.2 backstroke abilities, making him a contender for a top-16 finish in all four events at SECs.

With a strong ‘Bama backstroke group currently intact, expect Miceli to key in on butterfly as a freshman, where he appears to have more upside.

Enter Brazilians Bernardo Bondra and Kaique Alves, who figure to be massive additions that are flying under the radar coming into the season.

Israel’s Gil Kiesler enters the fold for one season out of NC State, and he’ll make an impact in distance free. Set for his graduate senior season, Kiesler owns bests of 4:15.83 in the 500 free and 14:57.71 in the 1650, easily putting him into position to qualify for NCs and potentially score with some small drops. His 1:36 200 free PB could also be of use in the 800 free relay.

Good to see USC back in the top 10 at #7. Influx of new talent should move the Trojans ideally back into Top 10 NCAA scoring territory. Inside the Top 20 definitely after hugely disappointing #27 in 2021.

Good to see a “flip” (Matheson from Northwestern) and some elite foreign talent (Selin) and a transfer portal (Grad transfer Pellini) added to the “extra year/super seniors”. Those will fill up the available scholarships and lay the groundwork for class of 2023. That groundwork starts with establishing a recruiting relationship and an eventual pipeline with American high school/age groupers. That means starting with a local (SoCal) base but extensive national recruiting.

These rankings are awesome! Can’t wait to see how fast the Bama freshman race v Delta State in their meet a week from Friday!

Is that the first NCAA Swim Meet of the year for everyone?

Would the ranking change if Iida was not a 1:44 guy??? I actually believe he never went that fast and that is older brother’s time (Sam Iida)…

No, he did. He did it at an Illinois conference meet this past year.

1
-1
Reply
JP input is too short
Reply to  TrueThat

I feel like these conversions are really rough for Marchand. A 1:55.4 200 fly converting to a time that would barely make A-finals at NCAAs feels a little ridiculous.

Being able to swim LCM doesn’t mean you’ll be as fast SCY and vice versa.

Many international swimmers who don’t focus as much on SC
LCM elite, SCY not nearly as elite

This 8-5 ranking is obviously squeed and inaccurate with Bama defects. BUT we all love the jabber about the GREATEST SPORT IN THE WORLD – MENS NCAA SWIMMING AND DIVING. Relative to this group impressed with the game plan and patience of Coach B at ASU. They will be tough! VERY impressed with the culture and synergy present at UVA with the NCAA win from the slower sex and this upward recruiting move on the part of the men – WELL DONE! All four of these teams have their respective rabid posters on both sides of the curve so let the smack talk continue. It adds immensely to the anticipation and excitement of our sport. Ya know for the relative… Read more »

“The slower sex”? Yeah, let’s not make that a thing.

I can already smell a swimswam future article : Can Leon Marchand be the future Michael Phelps ?

Nobody loves to hate on ASU as much as ASU likes to talk about how much everyone hates on them.

You’ve been put on notice: I’m officially not sleeping on ASU. If the class doesn’t produce top 5 results, I will return and label them as failures. Now that I’m no longer sleeping on them, I’ll be watching, intently, their every move. I hope they live up to my newfound expectations!

The have underperformed in March prior to covid. They have too much firepower to not perform better let’s see what happens

How many usernames are you going to make to comment on the same thread? It’s weird. Stop it.