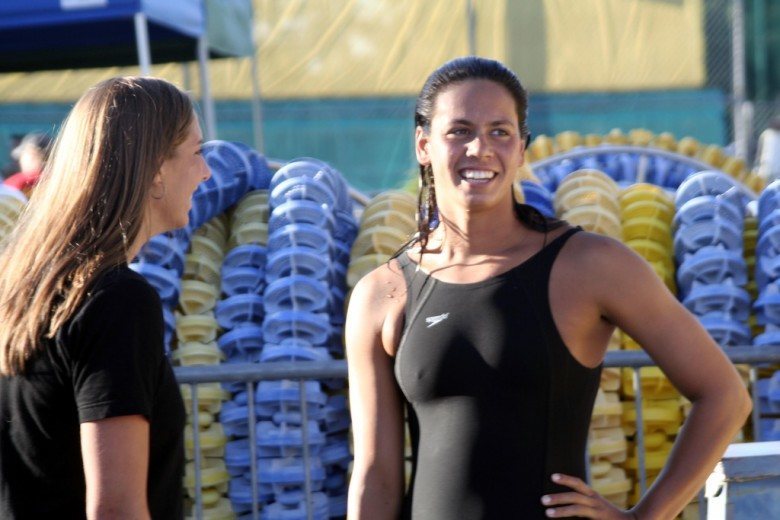 Dana Kirk is a former All-American as a swimmer, and could bring some big clout to the Stanford program (Photo Courtesy: JD Lasica)

Some people don’t like when we speculate, but that’s half of the fun of sports, so we’re going to do it anyway, with full acknowledgement that it’s just speculation and we haven’t heard anything firm on the below.

Now that Stanford has found its new head coach in former Cal assistant Greg Meehan, they will be in search of a new assistant. Fortunately for them, after taking so long to find their head coach, there is an intriguing, and probably fantastic, candidate again in their own back yard if they bother to look.

The 2004 Olympian earned 17 All-American awards and 8 Pac-10 Titles during her Stanford career that ran through 2006, and along with her sister Tara was a part of the first set of sisters on the same U.S. Olympic Team.

Kirk would bring some big-name power to the Stanford program, which would surely aid in recruiting (as well-known as Meehan is within the college coaching ranks, there are many who since his hiring has been announced are just learning about him). One would imagine that the Stanford administration would be looking for a woman to fill the role, and Kirk would certainly fill that.

But this wouldn’t be just a name to grab headlines. Kirk is a top coach with one of the most successful club programs in the country, and those who have seen her in action have reported great things about her coaching skill.

The desire seems to be there: Kirk has applied for this position before. The timing is right, because it will become more-and-more difficult to lure away quality college assistants now that the season has started. She and Meehan likely have some relationship built, given the number of PASA swimmers that end up in Berkeley, and it would be a second good choice for Stanford in as many weeks.

Dana may show some potential but she really does not have much experience at coaching yet, especially at coaching older, top level swimmers. I think Stanford would do well finding someone with a bit more experience.

So, a world class swimmer doesn’t know anything about top level swimmers? They don’t know how do get there? Or what it takes? REALLY- COACH?

Dana is a first class person, coach and athlete, Stanford would be and should be proud to have her!

My comment is not about Dana in particular – I have heard nothing but really good things about her, and have nothing to add the discussion in that respect.

But in general, I tend to agree with Coach – just because you’ve performed at a high level yourself does not immediately translate to communication skills, effectively leading others, strategically building a team and guiding athletes to achieve at a high level. These are additional skills that must be learned and refined — for most people this probably requires some considerable body of experience and self reflection to attain.

Surprised by the negativity. She’s local and could start right away presumably, which is important at this stage of the game. She’s not fresh out of school, has some age/experience separation from current college age swimmers. She’s an alum, and an olympian that brings instant name recognition to alum and recruits. She’s not the ONLY person that could do well at this job, but it could be a good fit. Remember it is an assistant position, and she doesn’t need to be THE leader or THE team builder yet, she would just need to buy into Greg’s philosophy.

Any suggestions for Greg’s old job at CAL?

Dana should not be considered. She has no collegiate coaching experience, and a minimal amount of coaching high level athletes in general. Don’t care about her swimming career and all of the accolades- coaching is a totally different ball game.

But, at the same time, Stanford hired Lea as the head coach and she had about the same experience/credentials (maybe not even as much) as Dana.