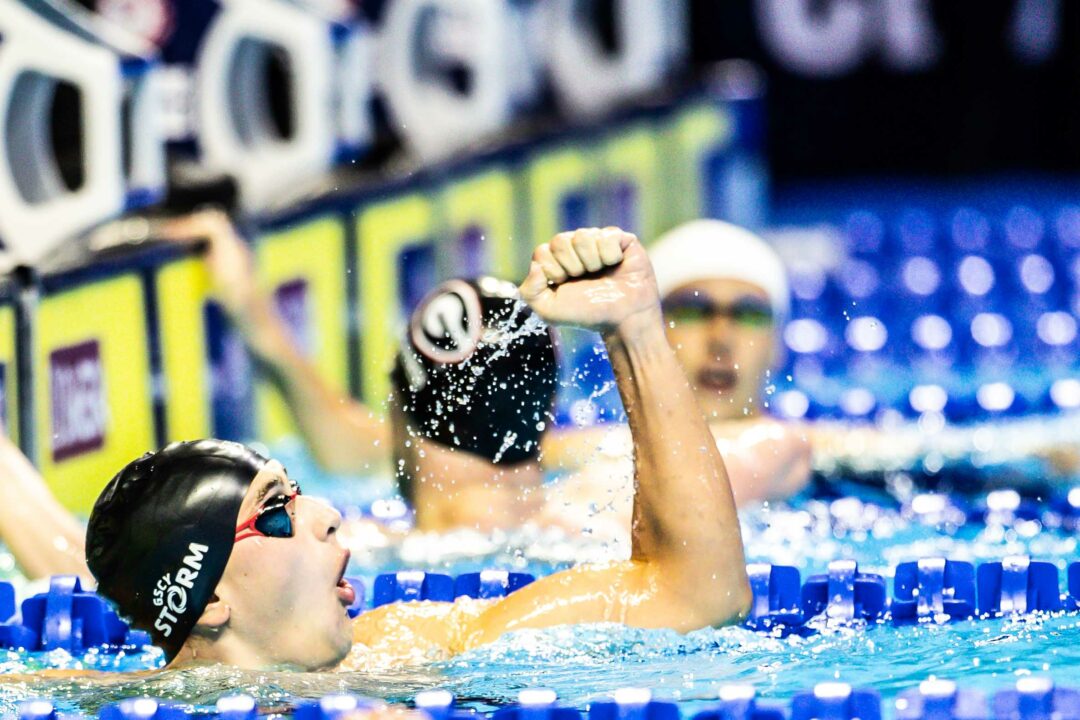 The freshman made waves in the prelims session, swimming a blistering personal best of 1:50.53 in the men's 200 breast to establish new meet and pool record. Stock photo via Jack Spitser/Spitser Photography

Akron racked up over 2000 points to win the women’s title at their own invite, while Penn won the men’s meet by over 600 points. Freshman Matt Fallon was a huge reason for Penn’s dominance on the men’s side of things.

The freshman made waves in the prelims session, swimming a blistering personal best of 1:50.53 in the men’s 200 breast to establish new meet and pool record. He wasn’t done there, however, as Fallon went on to roar right past the 1:50 barrier, swimming a 1:49.71 in finals. With the swim, Fallon is still the 2nd-fastest freshman of all-time, behind only Minnesota’s Max McHugh (1:49.41). Fallon is also now the top 200 breaststroker in the NCAA this season.

Fallon’s older brother, Billy Fallon would also grab a victory on the day, clocking a 15:22.72 to win the men’s 1650 free. The swim marked new pool and meet records in the event, and a season best for Fallon. It was also a good mid-season time for Fallon, coming in just 6 seconds off his personal best of 15:16.31 from the 2020 Ivy League Championships.

Cornell freshman Joseph Gurski won the men’s 200 fly in 1:46.99, breaking the meet and pool records. The swim was a massive personal best for Gurski, who entered the meet with a best time of 1:49.64 from April of this year.

Oakland picked up a pair of victories on the day as well. Christian Bart, who won the 50 free in record fashion earlier in the meet, won the men’s 100 free, swimming a 43.70. The swim marked, you guessed it, new meet and pool records, as well as a lifetime best by 0.04 seconds for Bart.

Lia Thomas had another record-breaking performance yesterday, winning the women’s 1650 free in 15:59.71. Thomas, a swimmer who is a transgender woman, spent the first 3 seasons of her collegiate eligibility swimming for the Penn men’s team, didn’t pace this race quite as well as her 200 and 500 freestyles earlier in the meet. She started out splitting high-28s on her 50s through the first 600 yards, but her pace then slipped up to low 29s, and kept creeping up, all the way to a 29.88 for her slowest split, which came on the 28th 50 of the race.

Oakland’s Susan LaGrand won the women’s 200 back in 1:54.58, leading the race wire-to-wire. LaGrand is coming off a highly successful 2020-2021 season, where she qualified for NCAAs in the event, and ultimately made the B final at NCAAs. LaGrand has a personal best of 1:53.48 in the 200 back, a time which she swam at NCAAs last year.

She should not be allowed to swim at NCAA champs

I am sorry but this is one area that’s really tricky. You can’t simply make a change like that and have all of the hormonal attributes of a woman. It takes more than 2 years for those changes to take place. Think about it this way…..she is 22 years old. The NCAA states that she has to have competed for 1 year and testosterone suppression.

She competed as a man the first 3 years of NCAA swimming.

Think about how long it takes to develop and go through puberty. It takes YEARS for the changes to take place internally. You cannot live 21 years as a male and then be 100% physically classified as female which honestly, applies… Read more »

I would be fine with allowing her to compete in dual meets and even an invite like this. NCs are a different ball game. In addition to the muscle differences, things like foot and hand size will be a huge advantage over her competitors.

This is especially hard because of the discourse that will inevitably surround Thomas. I would bet if Penn opened up comments on their instagram page that she will face death threats, particularly if her story starts to get picked up by national (non-swimming) media. No one should be subject to that.

Too late now. NY Post wrote about it on Dec 2 article.

Nothing tricky about it. Developed as a man. Has hand and foot size of a man. Q angle of a man. Too many advantages. This is wrong.

He put the long suit on and hit the easy button.

What is USA swimming’s stance on this? I’m guessing Fina wouldn’t apply here since it’s yards.

If Lia does break the NCAA/American/Us Open record in one of these events will it be recognized as an American / US Open record or is it just going to be an NCAA record?

Are they going to let Lia Thomas compete at NCAA? Seems a little unfair to some of the other female athletes who were born female and have the muscle mass and build of a biological female, but who knows.

Still doesn’t counteract the years of increased testosterone experienced through male puberty and the increased muscle mass, bone density, limb length etc… that all come along with it. All of which have a direct impact on athleticism and athletic performance

Does he negative split it like he does LCM?

32
0
Reply
JP input is too short
Reply to  jablo

It’s funny that if you look at prelim and final splits, the main difference is that 3rd 50 surge in finals. He pretty much even split the last 3 50s in prelims.

Yes, hello can someone please explain how it’s even possible to split 27.5 on the third 50 of a 200 breast?? That is just pure filth.

Poor Matt Fallon. Breaks 1:50 in the 200 BR and gets overshadowed in his own SS article.

Ah, brings me back to my old age-group days (like 3 years ago lmao) of seeing Matt Fallon absolutely eradicate the competition at every meet. Some things never change 🙂

Matt Fallon rightly deserves the glory for some amazing swimming. What is sad is that the actions of one transgender swimmer are distracting all of us from the accomplishments of an amazing male swimmer who is competing against other males in a level playing field as well as those of xx female swimmers who are breaking records but still losing to Lia by 15 seconds. Many have said that female swimmers should boycott races with Lia Thomas, but why should they have to sacrifice their years of training, hard work, etc. What about the administration of UPenn? What about Mike Schnurr, the coach of UPenn, have they forgotten about, or left behind in the scorched earth their female swimmers in… Read more »

I agree that this detracts from other male and female athletic accomplishments. But it has been so poorly executed, that it warrants immediate attention. My sons and daughters swim competitively.

I reject the concept that allowing Lia to compete as a trans-athlete has to destroy the history/legacy of female achievement in sport and the current accomplishments of female athletes.

I credit Lia for her bravery(!) and comments. I sincerely wish her profound happiness.

Calmer minds should prevail. As others have suggested, the NCAA/FINA could create an “Open” category for Lia (et al.). She gets to compete under her true identity and we can celebrate her without simultaneously destroying all that Title IX has brought to women’s sports.