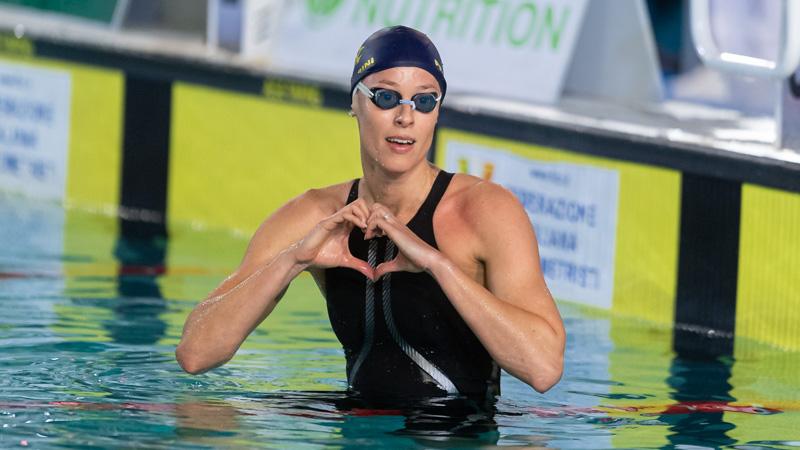 The 2021 Italian Short Course Winter Championships kicked off today in Riccione with timed finals taking place in both the morning and the afternoon.

Here in Riccione, we already saw a new World Junior Record bit the dust, courtesy of 18-year-old Simone Cerasuolo in the men’s 50m breast. Cerasuolo posted a time of 25.85 to erase his own previous WJR of 26.26 he logged in April of this year. You can read more about the teen’s breakthrough performance today here.

Highlighting the women’s racing was Federica Pellegrini‘s performance in the women’s 200m freestyle. The 33-year-old Olympic icon is saying goodbye after these Championships, but not before she produced the winning time in this event, one in which she had sworn off in the past before becoming the 2019 world champion.

Getting to the wall in a mark of 1:54.95 today, Pellegrini beat the field by well over a second. That’s a solid time from the woman who has been prolific across international swimming for the past 17 years, with her resume including everything from silver in the 200m free at the 2004 Olympic Games to gold the following Games in Beijing to nearly a dozen long course World Championships medals.

Another Olympic medalist in Simona Quadarella was in the pool today, posting a winning effort of 8:12.76 in the women’s 800m free. The 22-year-old said of Pellegrini post-race, “Federica Pellegrini is an idol for everyone and it is exciting to see her in her last race. She has been a point for all of us, as a woman and as an athlete, from which to draw inspiration.”

Already qualified for the Short Course World Championships by way of her 200m back silver medal at this year’s European Short Course Championships, Margherita Panziera topped the podium today in Riccione. Touching in 2:03.49, Panziera was solid enough to grab the gold in a time that checks in as the 10th fastest short course performance of her career.

Di Pietro was also the winner of the women’s 50m free, registering a time of 24.12 for a hefty lead on the field. Runner-up status went to Aglaia Pezzato in 24.53 while Constanza Cocconcelli was only .01 outside of silver in 24.54. A mark of 23.8 is required by the Italian Swimming Federation for next month’s Short Course World Championships.

As reported by SwimSwam Italia, Detti said post-race he has been suffering from Cytomegalovirus (CMV), a virus that can affect someone for life. According to The Mayo Clinic, symptoms of CMV include fatigue, fever, sore throat, and muscle aches.

Simone Stefani took the men’s 50m fly over Thomas Ceccon with the former touching in 22.78 to the latter’s 22.89. Neither reached the 22.5 minimum set by the Italian Swimming Federation, although Ceccon already has qualified for Abu Dhabi via his 3rd place performance at this year’s European Short Course Championships.

Ceccon wreaked havoc in the men’s 100m free registered the only sub-47 second time of the field in 46.60. That met the Italian qualification time for Abu Dhabi exactly.

Can’t wait to see her next race.

She knew how to pace a 200 free. She always had a strong finishing kick down the stretch.

Titmus has a good sense of pace too, so maybe she’ll be the one to break Pellegrini’s WR. Or Haughey, one of the two.

Those are probably the best two current candidates to break the world WR. I would maybe give the edge to Haughey right now. And within the next couple of years, watch for McIntosh to be in the picture as well as a potential WR breaker.

So often overlooked because of her 200 dominance for these many years (and undoubtedly partly since she retired the event from her program)…but hopefully also remembered that she was the 1st woman in history to break the 4:00 barrier in the 400 Free. Seems like this historical race is sometimes overlooked, maybe in part due to the monster 200 Fr WR she dropped at the same meet overshadowed it. Maybe the supersuits. But it IS a wonderful historical swim. Congratulations on a fabulous career!!!

Can we please see a La Fede tribute? So many amazing performances. A panthéon swimmer.

Giusy wrote this in the spring. I think it’s fitting: https://swimswam.com/the-divine-last-show/