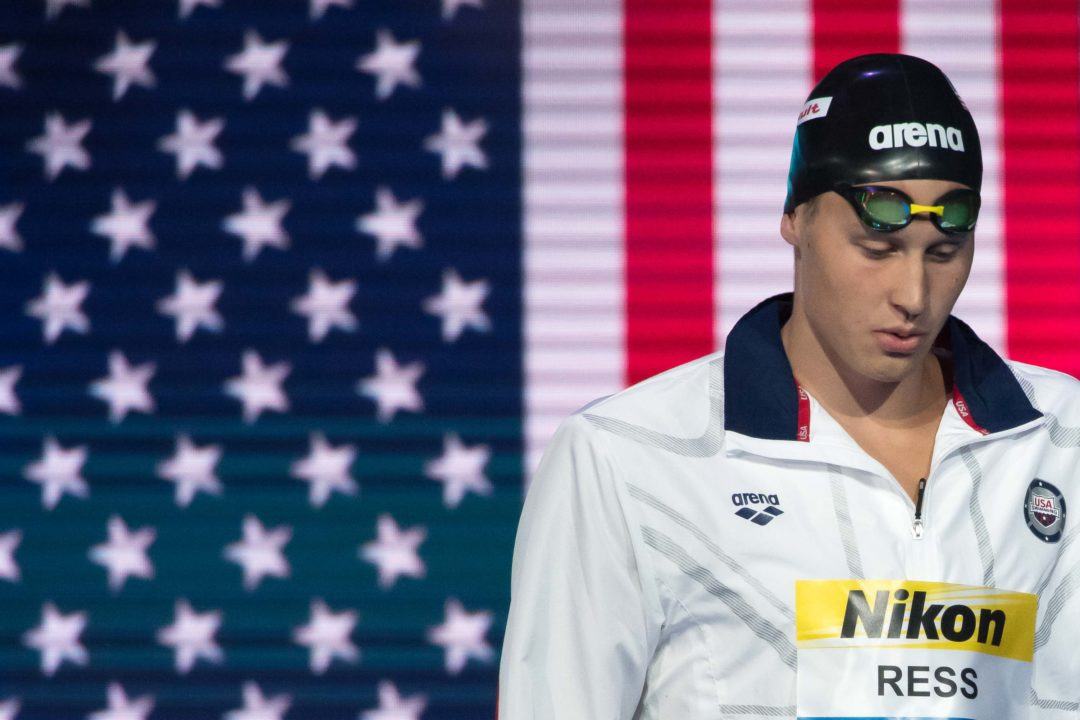 Swimming does more than 4 times as well as the average NFL game in one key area. Archive photo via Mike Lewis/Ola Vista Photography

I’ve always had a fascination with the amount of ‘action’ in a sporting event. It’s a curious phenomenon to me that American sports fans (albeit there’s a shift) can say that soccer is boring because there’s not enough going on, but their most popular sport is football – where, according to a 2013 study, a 3 hour, 12 minute game has approximately 11 minutes of action (and about 35 minutes of commercials). That comes out to about 5.7% action – from snap to tackle – in a 3 hour sitting.

So I wanted to see how the swimming World Championships stacked up in terms of the amount of excitement jammed into a period of time.

So I crunched the numbers, and an average finals session at the 2017 World Championships lasted about 6,292 seconds (or, about 1 hour and 44 minutes), and within that session there about 33 minutes worth of action. That comes out to about 23.54% of the finals time being live-action.

Can swim meets be boring? Yes. Can an individual swimming race be the most exciting play in sports, akin to a last-minute, go-ahead touchdown? Rowdy Gaines and Jason Lezak sure do seem to think so.

There is a growing chorus in swimming. It’s refrain is that “we want more fans in swimming, we need more paying customers at meets, pro swimmers need to make more money,” with a response of “but we need to make sure that the fans know that they’re always less important than the athletes and coaches.” It’s contradictory, and it’s the biggest economic challenge of our sport.

In the meantime, if you’re curious where the biggest bang-for-your-buck is, try day  and day 8 – the last day has the most total racing time, and better yet: they’re all finals. Days 2 and 7 offer the lowest ratios – which is rather surprising, given that the women’s 800 free falls on day 7, and distance races typically improve the ratios. The relay at the end is slow to start – it comes on a 13-minute gap after the 800 ends, which is more than most of the gaps throughout the meet.

Methodology notes: this is an inexact science, but is approximately correct. Time stamps on event pages, plus the length of the session-ending event, were used to approximate session length. Action time was determined using the last-place finisher in each race. There was a swim-off at the end of day 2 – that we ignored.

US Swimming should do a better job of putting together fan packages like they do for other big sports. For a set amount the package includes a t-shirt, 1 day ticket to the nearest meet, and other trinkets, etc.. Also, let your young fans get closer to the action through texting questions to athletes that get asked at meets. Also, they don’t do a good job of making it easy to find the schedule for meets in your area. So many little marketing techniques they are simply missing.

That study is somewhat unfair to football, because only watching the times when the ball is in play would be utterly unwatchable. You need to see the formations and alignments to understand what’s happening.

Additionally, significant action happens before the ball is snapped. Receivers go in motion, the QB tries to draw the defense off-side, the offense tries to run to the line as quickly as possible to spike the ball and stop the clock with 30 seconds to play, a team changes formation to run a trick play…you miss a great portion of the game just looking at live-ball situations.

Swimming is also competed in almost every country in the world, which gives it a much wider fanbase than American football. There are few, if any, other sports where more than 100 countries compete in some sort of international event every year.

Football (and by proxy, a football game) sucks. The only thing worse is baseball.
The end.

Golf is even worse

Golf is the ultimate examination. Every lie is different and the requirements of every shot are different. Just picking the correct club in a challenge along with how to adjust the swing slightly to compensate for the club being slightly too much or slightly too little. Then the varying mental challenges during a four hour round of ups and down. Sometimes you stand over a shot knowing darn well it will fit perfectly into a 5 yard window that you are envisioning, and other times a two-way miss seems all but inevitable. Which way will it go?

Naturally the knuckleheads are oblivious to all of the above. They decide golf is nothing more than darts on grass. Looks easy enough.… Read more »

HAHAHHAHA
If golf is so hard then why is Stephen curry so good without practice? Michael phelps owns the world record for the longest televised put in history. So many celebrities are close to as good as pros without any focus on it whatsoever.

Top athletes are fascinated by golf because, for many, it’s easy to pick up a club and be pretty good at the amateur pro or pro level

I was gonna say, you could still do math after participating.

Yeah? Say that to the countless numbers of people who hit their heads on the wall swimming backstroke… Swimming is far and away more dangerous than football and all other sports-combined.

it was a very unimpressive try by that troll – totally agree ?

I don’t think he was trolling, it was irony.