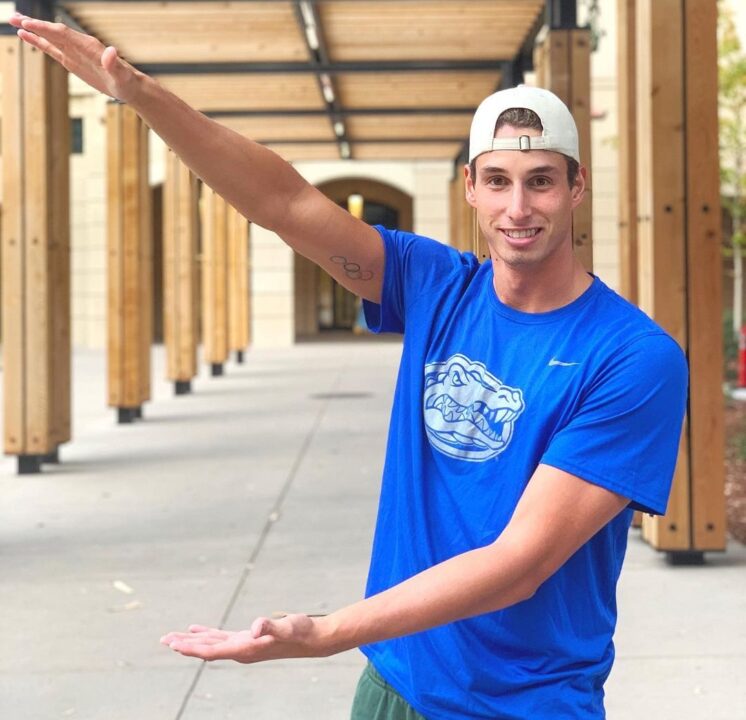 Alberto Mestre's younger brother Alfonso is a junior at Florida. Their dad, also named Alberto, was a 17-time All-American for the Gators in the 1980s.

The momentum continued for the University of Florida swimming & diving program, as former Stanford Cardinal Alberto Mestre has announced that he will transfer to the Gators. He plans to arrive in time for the spring semester at Florida, and will work on a Masters Degree in International Business.

He will complete his undergraduate degree at Stanford this semester before beginning at Florida.

Mestre is a sprint freestyler who represented Venezuela at the Tokyo 2020 Olympics over the summer. There, he placed 15th in the 50 free (22.22) and 33rd in the 100 free (49.44). He was the only Venezuelan swimmer to advance from prelims at the Tokyo Olympics.

At Florida, he’ll join his younger brother Alfonso Mestre, who is a rising junior with the Gators. Alfonso also swam at the Olympics, but is more distance-oriented: he broke National Records in the 400 (3:47.14) and 800 (7:52.07) freestyles at the Tokyo Games.

Alberto has two seasons of eligibility remaining after swimming at Stanford from 2017 through the fall semester of the 2019-2020 season. He took the 2018-2019 season off to train with the Gator Swim Club, the club team based out of the University of Florida, so he’s very familiar with the program.

He didn’t compete in the 2020-2021 season, so doesn’t get the extra year of eligibility afforded to those who did.

Alberto Mestre‘s best times in yards all come from his freshman season at Stanford.

The 2021-2022 season is head coach Anthony Nesty’s first year leading a combined men’s and women’s team at Florida. He spent the previous three seasons as the head coach of just the men’s team.

Mestre’s father, also named Alberto, was a member of three NCAA Championship-winning relays, and two NCAA Championship-winning teams, at the University of Florida from 1983 through 1986. He earned 17 All-America awards in his four seasons and is enshrined in the University of Florida Athletic Hall of Fame. He competed in the 1980 and 1984 Olympic Games and has 5 career Pan American Games medals.

Wonder why he didn’t keep swimming at Stanford? Any ideas?

If athletes don’t compete and follow the proper procedure for a redshirt season, they don’t get shorted a year. He used two seasons of eligibility at Stanford, and has two left at Florida.

It *feels* like he gets shorted a year because he only swam half-a-season at Stanford one year, but that uses a year of eligibility whether COVID is accounted for or not.

Apparently one very smart brother (Sprinter, Stanford, grad school, in that order) and the other not so smart (UF, distance).

Congratulations, Gator Swimming..!! Show them how to do it… and while you’re at it, please see if you can help Ms. Ledecky shave 4.8 seconds off of her 800M Freestyle. Thank you…

Do it for me please Nesty

I am thinking Kieran will now swim the 200 back at SEC’s and NCAA’s ?

This is great news for Florida’s relays, and should keep Kieran fresher for the 500 final since Mestre should be able to replace his 18.xx split on the 200 FR.

So he did graduate from Stanford?

It says he completed his undergrad at UF.

Not it does not state that. TWO brothers, AND their Olympian father are all mentioned in this article, so it CAN get tricky if one is not aware which generation Alberto is being written about in which sentence, etc. LITERALLY the one single sentence in the 2nd paragraph addresses the school where the person who is the topic of this article is obtaining his undergrad degree FROM (Stanford) at this semester’s end, after which he is transferring to attend UF for his Master’s degree. This article is clearly informing us the news of Alberto Mestro, Jr. The comments about the current Florida Gator are of his younger brother. (Can’t decide which one looks MORE like his father, now that I’ve… Read more »