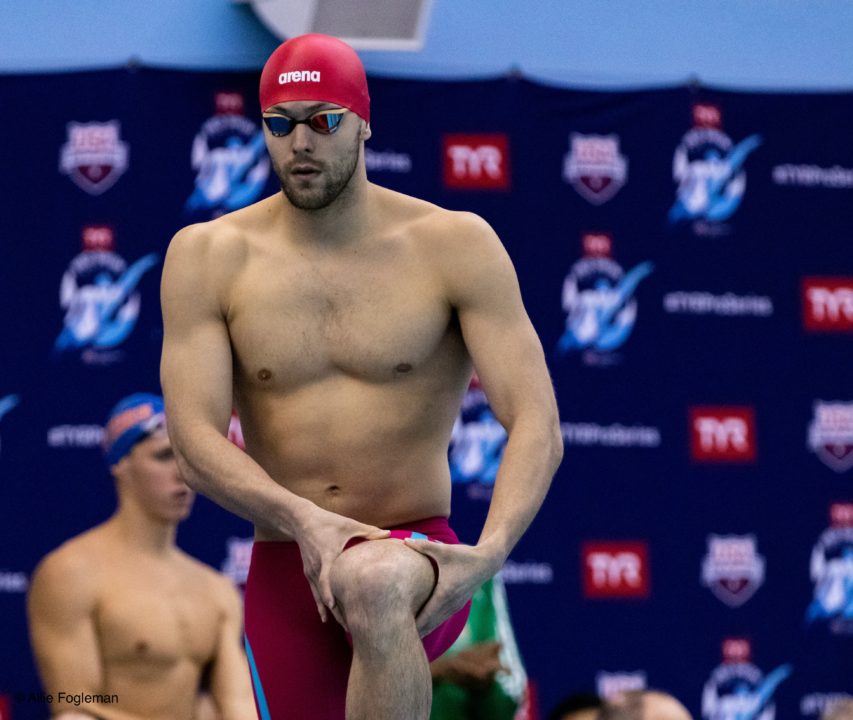 Held, who had moved to train with the Indiana pro group in February, expects Zane Waddell, Laurent Bams and Ali Khalafalla will comprise his main training partners at Alabama. Current photo via Allie Fogleman

Three months after he moved from NC State to Indiana University to join the professional group in Bloomington, 2016 Olympian Ryan Held is following former IU associate head sprint coach Coley Stickels to the University of Alabama, where he was named head coach in late April following Dennis Pursley‘s retirement.

“I decided to follow Coley to Alabama because I had great success with him in the short amount of time I was with him,” Held told SwimSwam. “It was extremely hard to decide to leave IU because they have a fantastic pro culture and family there. I was instantly welcomed in that group at IU.”

After signing his first professional suit deal with Arena in March, Held picked up a win in the 100 free at the Richmond Pro Swim Series stop in April, going an in-season best time of 48.70 (well under his previous in-season PR of 49.24). He did not compete in at the Pro Swim Series in Bloomington last weekend and instead appeared on social media to be in New York.

The decorated IU team includes post-grads Blake Pieroni, Cody Miller, Zane Grothe and Annie Lazor, as well as recent graduates Lilly King, Zach Apple, and Vini Lanza. While we haven’t historically seen much of a “pro group,” in the same way IU has one, from Alabama, it appears the program has one forming. Held, 23, expects that sprinters Zane Waddell, Laurent Bams and Ali Khalafalla will be his main training partners.

The multi-time SEC champion Waddell, who represents South Africa internationally, is heading into his senior season at Alabama, and Bams – who represents the Netherlands – wrapped up his NCAA career this year. Khalafalla, who represents Egypt, will also be making the move from IU as he graduated this month. Former Alabama senior associate head coach Jonty Skinner is headed to Indiana to replace Stickels, which could entail additional swaps in athlete personnel between the two programs.

Thought he would stay with Blake and push each other.

He will be with Blake. Jack Blake. He went 19.6s in the 50fr and is a real contender for the olympic gold next year.

Held also looks to be a huge clash of clans pickup for Bama. The team has a very strong group playing and is known for their tenacious clan war approach. Will be interesting to see if he is allowed in. I predict yes.

Great call. Those who know, know. Stick with Coley, Ryan. You know what’s up.

Margo Geer? She followed coley to Indiana so this could be interesting.

The word on the street is that Margo is following Coley

The Police song “Man in a Suitcase” comes to mind!

Pro swimmers have such different needs compared to college…

Hopefully this can convince Robert Howard to stay at bama. They’d be killer training partners and possibly both good contenders for that 2020 spots.

Why would Howard part with Jonty Skinner?

Did something happen at NC State because he appeared to be doing very well there? Great college career, Olympic gold medal and a World Record last summer. Seems pretty good.

He wasn’t doing that well. He went from Olympic Gold medalist to not even making the US National Team. Probably time for a change.

He also had his best collegiate season. I dont think one bad season should lead to a drastic change

Well of course he had his ‘best collegiate season’ at the college he was at….

He did not make the National team, but he did set an American record in the short course 100 free last December leading off the WC 400 free relay, since beaten by Dressel, not to mention medals in a bunch of other relays. I would say he was doing quite well if we just look at his times. The question was, did something happen at NC State that caused him to switch coaches.

Once someone graduates, the only thing that matters is long course. That’s cool he had his best collegiate season. Fun that he got a world record in a course that’s rarely competed. Results in the big pool remain all that matter. He was not getting those results. He’s a pro. Ress was a mess and completely out of shape. Held left the second he graduated this winter. Needed to find a place he was confident he could become relevant again.

Think that theyre an incredibly strong NCAA program, but that they just dont have the pro group he’d want to train around. Dont know for sure, but I dont know if they have any pros training there right now

I coach a club team at the NC State pool site.. and obviously a swim fan… From what I see on deck, they have Ipsen, Hannah Moore, Akram Mahmoud (Bernardino connection). Not sure if you’d count Vazaios, Ress, and Molacek as pro just yet… but they are in the water training with Guntoro

Even with the great college culture there is no pro group and after rio Ryan wasn’t really close to any of his best long course times so I think he needed the training change most of all.

DeSorbo left? Wouldn’t he then consider training with Conger in Charlottesville?