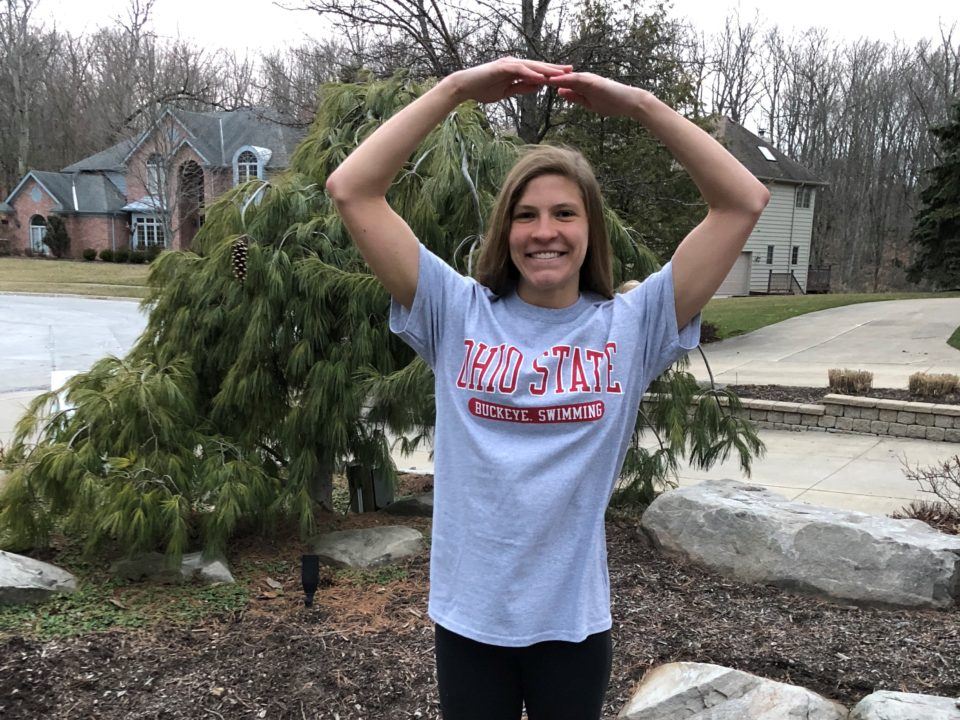 Hannah Bach came out of high school as an Ohio state record holder, and as a sophomore she's now making her mark on the Ohio State record books too.

Only 3 swimmers in history have split faster than that on the breaststroke leg of the 200 medley relay, and two of them have World Championship or Olympic medals.

Lilly King has the 2 fastest splits in history and has split sub-26 seconds 7 times. The rest of the world combined has only done so twice.

With that split, Bach pulled Ohio State back in to the women’s 200 medley relay after Michigan leadoff leg Maggie MacNeil split the fastest 50 yard backstroke leadoff in history at 23.02.

Ohio State would eventually cruise to a relay win, touching in 1:34.46 – almost two seconds ahead of the field.

The Ohio State women hadn’t won the 200 medley relay at the Big Ten Championships since they took back to back titles in 1982 and 1983, which were the first two years of the women’s swimming & diving Big Ten championships.

And so Ohio State opened their Big Ten title defense with a resounding victory and a school record – by seven tenths of a second. The old record of 1:35.17 was set last season, when they finished 2nd in this race. Only the breaststroke leg, Bach, and freestyle leg, Rayner, return from that relay; backstroke leadoff Emily Crane and KitKat Zelnick are both new to the team.

Early indications are that the favored Ohio State Buckeyes could turn this into a runaway sooner rather than later, if they keep the momentum up.

But they’re not the only team swimming well. Northwestern, without their star Calypso Sheridan (an Australian who stayed home this season) and with head coach Jeremy Kipp moving on to USC proved that Katie Robinson, promoted to lead the program this season, has plenty of magic of her own to continue the ‘Cats’ momentum.

Northwestern’s second-place finish broke their school record in the event as well.

With Michigan coming back later in the session and winning the 800 free relay without having to use Maggie MacNeil, the Wolverines aren’t going to give up on the team battle easily.

And it’s not like their medley relay was bad. They had 3 very good legs, and just don’t have the breaststroker this season to stay close with a very well-rounded Ohio State team.

Given that they missed two weeks of team training earlier this month, coming out with a “fastest all-time swim” and a Big Ten title in the first two events of the meet should give them confidence, and momentum can sometimes overcome paper at these high-intensity conference championships.

The most interesting relay choice of the night goes to the Wisconsin women, who left Phoebe Bacon off the 200 medley relay, giving that spot to another freshman, Kaylyn Schoof, instead. The end result for Wisconsin was a 5th place finish in the 200 medley relay and a 4th-place finish in the 800 free relay. Coming away from day 1 with those finishes and Bacon available for their last 3 relays is a good position for the Badgers.

The female IU coach would have been faster than 3 of the relay splits on the 800 free relay.

The team is short-handed this season, only a few swimmers came back to campus, so they won’t have many entries throughout the meet.

I don’t think Caneta’s split was legit considering her next best is 26.4, and the backstroker also went 25

Your facts don’t care about their feelings

You’d use the same headline on two articles in the same day? Guess that’s why you are where you are…

Not the same headline. (Actually didn’t see the Maggs headline first)
Maybe go with Maggs goes faster than any Gator in history.

I could’ve sworn that Hannis popped a 25 at a meet, but maybe I’m wrong

https://www.omegatiming.com/2013/at-t-winter-national-championships-live-results it has her as a 25.8, and it seems legit but there’s no reaction time so maybe there was an error?