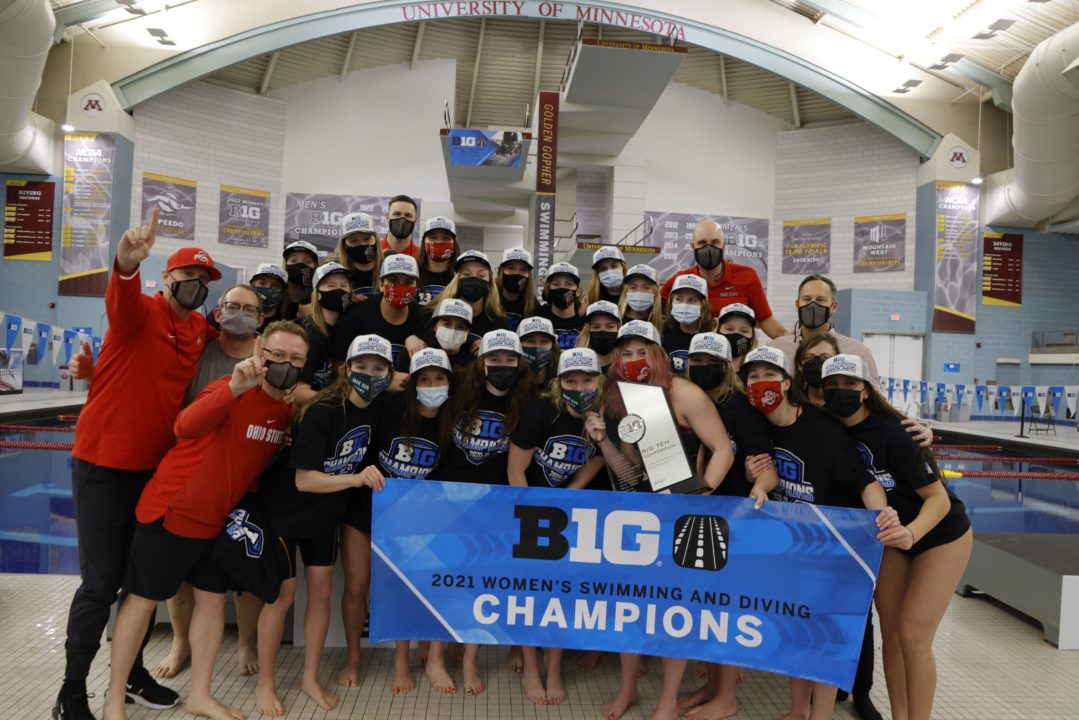 The Ohio State Buckeyes defended their Big Ten team title in 2021 with the highest team score in history with 1,584 points. Archive photo via Ohio State Athletics

The 2021 Big Ten Women’s Swimming & Diving Championships have come to a close in Minnesota, with the Ohio State Buckeyes successfully defending their historic 2020 team title. Placing second were the Michigan Wolverines followed by the Indiana Hoosiers, Northwestern Wildcats, and Wisconsin Badgers to round out the top five teams.

This is now Ohio State’s 7th Big Ten team title in program history, now tied with Minnesota for the 2nd-most team titles in conference history. Michigan still has the most titles in history with 17.

Ohio State continued to flex their deep squad just as they did in 2020. Looking at all swimmers on every team who swam prelims yet did not qualify for finals, Ohio State had the least number of swimmers miss finals every single session. For example, on day four Michigan had 6 swimmers miss the top 24 while Ohio State only had 2 swimmers not qualify into finals. Overall, Ohio State had 14 swims that did not make finals. The next-best team was Michigan with 25 non-final swims.

While Ohio State had graduated the most points from last year, they still returned 860 points to Michigan’s 936 returning points. The Buckeye seniors, however, were the most dominant class at this meet having scored 422 total points, which is 200 points more than any other senior class at this meet.

Ohio State also won four individual titles along with both medley relays and the 200 free relay. Scoring 92 points for the Buckeyes was senior Kristen Romano, who won both the 200 IM (1:54.19) and 400 IM (4:06.75) along with taking second in the 200 back. Senior teammate Katherine Trace scored the 2nd-most points with 79, which include her 400 IM runner-up finish and 3rd-place 200 fly finish. Junior Veronica Tafuto won the 500 free on the first full day of competition while sophomore Hannah Bach won the 100 breast the next day after placing 6th last year.

What made Ohio State’s performance even more dominant was the fact that every single athlete scored double-digit points at this meet. The lowest scorer managed to pick up 14 points, which is a B-final swim.

A bit of history:

In 1976 at the Men’s NCAA Championships at Army (West Point) Coach Ray Buzzard of Tennessee had his 2 finalist in the 100 free swim to easy 5th and 6th place finishes so that they would be fresh for the 400 free relay.
This resulted in the discussion and passing of the rule of “an honest effort”.

Nice, thanks for the breakdown. It just shows that depth wins conference titles.

Goose – I haven’t seen that formally announced anywhere yet. Purdue has claimed that they are hosting one or the other, but haven’t said which ones yet.

Some discussion that Wisconsin might be in the running for the 2022 women’s meet at its new pool. Nothing confirmed yet, however.

Congratulations to the Ohio State women and my old friend, and our longtime Indiana University nemesis, Coach Billy Dorenkott! Bill might be one of the most underrated coaches in the country. I’ve had numerous athletes swim for him at Ashland, Penn State and Ohio State and all of them got faster, had a great experience and Bill treated them like his own family. I hope Mel and Coleman can get a video interview with him this week.

Damn. Really shows the power of depth. I know none of the names on the Ohio women’s squad, but that is obviously something that should change!

Can’t believe the disrespect to OSU in this article