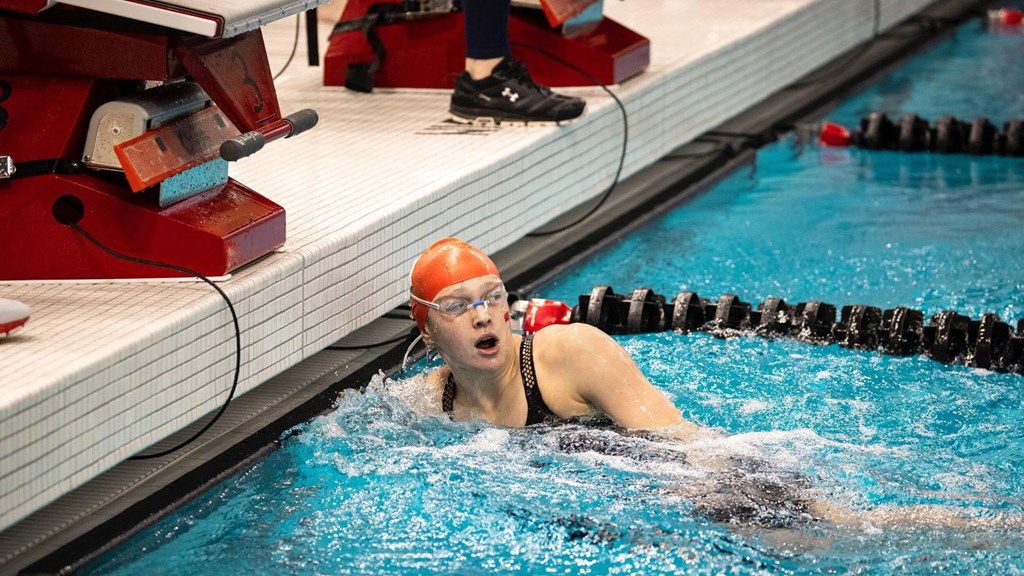 Freshman Phoebe Bacon is looking to defend the Badger's 100 back title (won last year by Beata Nelson.) OSU's Emily Crane was within .5 of her in prelims. Archive photo via Wisconsin Athletics

Michigan’s Maggie MacNeil will swim the 100 free, along with on-fire Northwestern senior Maddie Smith. Phoebe Bacon will swim the 200 back as well.

The final day of the 2021 Big Ten Women’s Swimming Championships in Minneapolis will see Indiana and Northwestern battle for 3rd-place.

After day three prelims, Ohio State has extended their lead to 179 points over Michigan. The Buckeyes look to gain the most points in the 100 breast final tonight with 5 finalists including top seed sophomore Hannah Bach.

Michigan junior Olivia Carter is leading the 200 fly field tonight by about 2.5 seconds, looking to defend her 2020 championship title. 3 other Wolverines join her in the ‘A’ final and they are expected to garner major points for Michigan, chipping away at the Buckeye’s lead.

Notably, MacNeil was seeded 2nd in the 100 back going into this meet but she scratched the event in order to prepare for the 100 free tomorrow. Wisconsin’s Phoebe Bacon is still the top seed going into 100 back final tonight, but her closest challenger is OSU’s Emily Crane who finished less than half-a-second behind her.

The closest race in team standings right now is between Indiana (619) and Northwestern (599.5) for 3rd place going into the final day of the 2021 Big Ten Championships, tomorrow.

Freshman Phoebe Bacon led a 1-3 finish for the Wisconsin Badgers, improving her prelims time by nearly a full second. She was still about .70 off her lifetime best from 2019, but her performance tonight was enough to secure the win. This is the 4th year in a row that Wisconsin has won this event, as Beata Nelson was the Big Ten 100 back champion for the past 3 years.

OSU freshman Emily Crane tore down Bacon’s half-a-second lead from prelims tonight, touching the wall a mere .06 after Bacon, and setting a new OSU school record. Newman, a junior, outswam her lifetime best from this morning by .01. Going into this meet, her all-time fastest 100 back time stood at 53.17 from the 2019 NC State Invitational.

There was one disqualification, from Northwestern’s Miriam Guevara, whose 53.10 from prelims would have placed her in 4th place. Tonight she touched the wall with a time of 1:02 and was reportedly disqualified for improper conduct or “failure to show an honest effort.” Guevara is set to compete in the 200 fly later tonight as the 2nd seed behind Michigan’s Olivia Carter.

Sophomore Hannah Bach improved upon her lifetime best from prelims by .11 and broke the OSU program record in order to defend 1st place from Northwestern senior Sophie Angus. Brunzell was the 2nd seed going into Friday’s final session, about one second behind Bach.

Angus shaved .03 from her lifetime best which she set one month ago at the Northwestern and Penn State dual meet. This was also a solid swim for Brunzell who snuck under the lifetime best 100 breast she swam at last year’s Big Ten Championships by .01.

Michigan’s Olivia Carter lowered her own Big Ten record by more than a second, touching the wall 1st with a new lifetime best of 1:52.17 and a 3 second lead over the field. She simultaneously broke her own Michigan program record and led a 1-4-5-8 finish for the Wolverines.

Guevara maintained Carter’s pace through the first 100 yards, as she touched the wall after the first 100 at 53.99 and Carter turned at 53.96. But it was the back-half that Carter really built her lead, finishing the race with a 100 split of 58.48 while no one else in the field brought it home under the one-minute mark. Guevara came within .7 of her lifetime best from last year’s Championships where she placed 3rd.

OSU’s Katherine Trace had an incredible finish compared to her 17th place finish at last year’s Championships where she posted a 1:58.65. Tonight she destroyed her previous lifetime best, 1:57.47, which she swam at the 2019 Big Ten Championships.

Nebraska’s Abigail Knapton claimed victory on platform tonight, following her 2nd place finish on 3-meter during Thursday’s finals session. Knapton, a redshirt senior, did not compete last year but she did place 4th in the event at the 2019 Big Ten Championships.

Purdue junior Maggie Merriman and OSU’s Ciara McGing were separated by less than 1 point tonight, with Merriman claiming 2nd place. This was way closer than Merriman’s battle with Maycey Vieta for 2nd place last year which Vieta ended up winning by less than 2 points. Freshman McGing was the youngest in the top 3 tonight, marking her Big Ten Championship debut with a 3rd place finish.

Ohio State’s relay splits seem to be the inverse of Michigan’s tonight. The Wolverines decided to lead off with the 2021 Big Ten 50 champion Maggie MacNeil (21.50) followed by 2nd place finisher Daria Pyshenko (21.76). MacNeil posted the fastest split in the field.

Ohio State relay built more momentum on the back-half, resulting in these splits: Taylor Petrak (22.04), Emily Crane (22.13), Katherine Zenick (21.79), and Amy Fulmer (21.57). The Buckeyes’ anchor leg was the closest challenger to MacNeil’s leadoff leg  and Fulmer was able to run down Michigan’s anchor, Olivia Carter, who posted a 22.23 after her 200 fly win one event earlier.

Not sure how I feel about the DQ on Guevera. On one hand the NCAA rule is very subjective and should be changed to defined an “Honest effort” and what that means. On another hand she went a 1:02. No one even in Prelims was that slow. In my opinion she and the coaching staff took away an opportunity for another girl to make the A Final and actually try there hardest for there team. Swimmers in a D3 duel meet swim faster than that. This is the Big Ten Champs.

I am similarly torn. I have had & seen swimmers “float” a finals to focus on a later swim and this has never been called. I didn’t even know it was a rule…but I am not an official. So, I ask myself this: Why was it called? Most commenters are focusing on the time. It was slow, but is that the primary reason? What if the official saw or heard something that made it clear that the swimmer was not going to give an honest effort? What should they do? They are supposed to hold swimmers to the rules. It is unfortunate, but there is a lesson here for everyone.

Shouldn’t it say “current champion” or something of that like instead of “defending champion” when last year’s champ graduated/ isn’t swimming?

Miriam getting DQed is complete BS. Where is the line drawn between trying and not trying? If she had gone 2 seconds faster would it have been fine? Clearly this rule is way too subjective and should be clarified or removed. If it comes down to Indiana and NU in a close battle for 3rd, the ‘cats will be ANGRY

THE CATS *ARE* ANGRY

Observing from the stands, the issue for me was the slapping of the water in laughter, mocking the pre-planned lack of effort. Just my opinion, but that is both unsportsmanlike and disrespectful to those that do give honest effort. The athlete and staff made it very clear, this was intentional…and the immature reaction to a purposeful swim, and a rookie coach combined for a bonehead move. I suspect both athlete and head coach will learn not to be as obvious next time. But, the DQ was both merited by the rules of sport and well deserved.

Guevara should not have been disqualified, she absolutely earned that swim in the morning with the 200 fly double. When, you are chasing Indiana, every point counts and her better event is the 200 fly with more point potential. If the score settles tomorrow and NU is within that range of Indiana, hands may be thrown.

Awww Coach Kipp! This might be the first time you’ve supported Northwestern. Thank you so much.

Diving Results are wrong on here. Maggie Merriman was 2nd from Purdue. Ciara McGing 3rd. then Maycey and Emily from Purdue.

Bad call. Having two morning swims earlier in the day, how can officials measure level of effort/exhaustion?