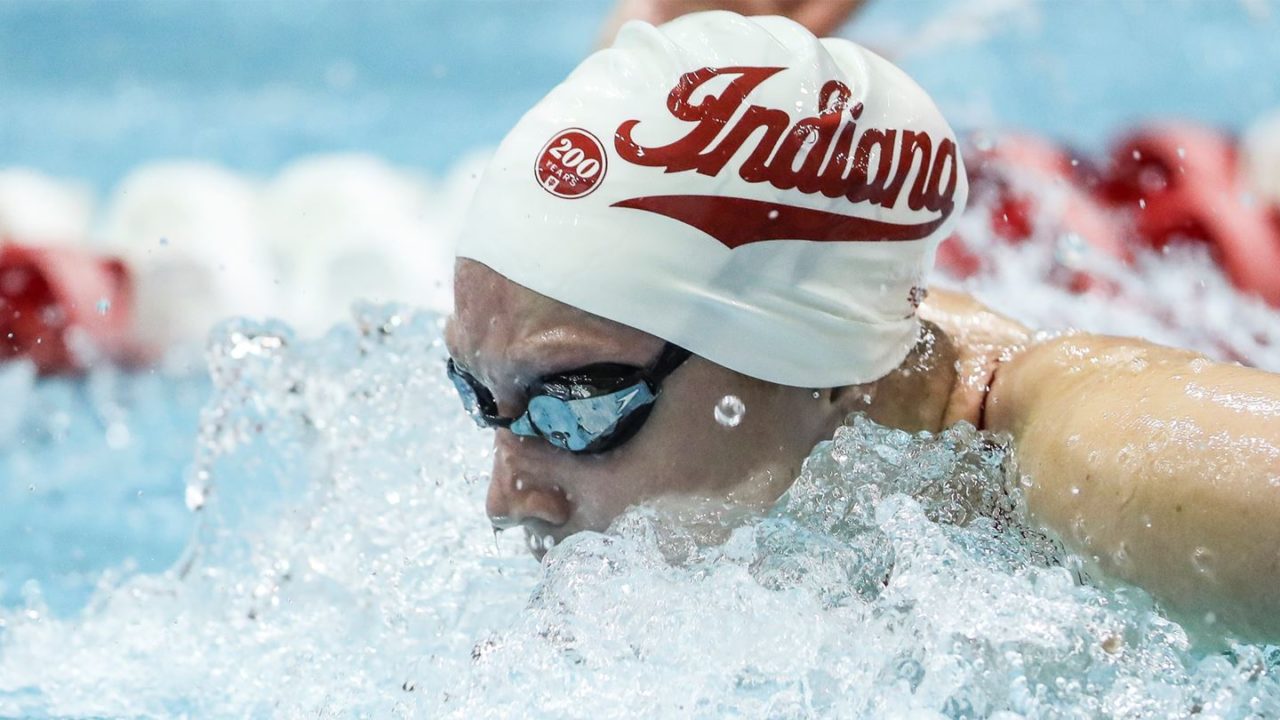 On paper with scored prelims and 1650 FR seeds, Northwestern could jump Indiana for 3rd by 15 points. However, the Hoosiers have the top 3 seeds in the 2BR. Stock photo via Indiana Athletics

The Ohio State Buckeyes are hours away from defending their Big Ten team title here in Minnesota. Tonight, the Buckeyes will have 17 scoring swims, earning 6 up and 7 up swims from this morning. The Buckeyes are projected to earn roughly 80 points in both the 200 back and 200 breast. Senior Kristen Romano already won the 200/400 IM, a sweep worth 64 points, and is seeded second in the 200 back. Sophomore Hannah Bach, more known for her sprint side, qualified 8th into the 100 breast A-final. Last year, Bach’s C-final win earned 11 points for the Buckeyes. Just placing 8th tonight would be worth 22 points, double from what she earned last year. Meanwhile in the 100 free, Ohio State could earn 103.5 points with the help of their 3 A-finalists, led by #3 seed Taylor Petrak. The Ohio State Buckeyes also have two swimmers seeded in B-final scoring position (11-20 points) in the 1650 free.

Northwestern had another big morning, racking in 6 up swims and 1 mid swim. In the 1650 free seeds, Lola Mull is the #3 seed along with #6 seed Ilektra Lebl, which is a potential 51 points. The Wildcats are looking to pick up 88 points in the 200 breast as well as 83 points in the mile, projecting to hit 245 points across all individual pool events tonight. The Wildcats will also have 2020 runner-up Emma Lepisova in the 200 back A-final and on-fire senior Maddie Smith plus Selen Ozbilen in the 100 free championship final.

Indiana turned on the right gears this morning to fend off Northwestern for 3rd place, earning 5 up swims and 4 mid swims this morning. In the 200 breast, the Hoosiers went 1-2-3 in prelims thanks to Emily Weiss, Noelle Peplowski, and Mac Looze. Looze’s swim was her first time under 2:10 to tie for second this morning. If achieved in finals, that sweep is worth 87 points. In the 200 back, Bailey Kovac sliced 2 seconds off her lifetime best to place 6th into the A-final. If she stayed near her previous best, that would have only managed a B-final spot.

While picking up 4 up swims this morning, Michigan will project to earn 213 points. In the 1650 free seeds, senior Sierra Schmidt is the top seed, along with sophomore teammate Kaitlynn Sims seeded in 8th. The Wolverines will also have two A-finalists each in the 200 back and 100 free. The Wolverines could finish 1-2 in the 100 free with top two seeds Daria Pyshnenko and Big Ten record-holder Maggie MacNeil. Again, no Michigan Wolverines will score in the 200 breast.

Wisconsin will have freshman stand-out Phoebe Bacon contest as the 200 back top seed, aiming to sweep the backstrokes. Meanwhile, Minnesota freshman Indy Jongman qualified 8th into the back final after scratching the 100 free.

On paper, Ohio State is projected to be in team title-winning position by over 300 points. While Michigan picked up the 4th-most morning points, they are still projected to comfortably take second place in the team standings. If things go as planned, Northwestern could set themselves up to jump Indiana for 3rd place by 15 points, before 1-meter diving and the 400 free relay. Penn State could also break their tie from Purdue for 9th place while Michigan State remains ahead of Illinois for 11th.

*before 1-meter diving and 400 free relay

My first instinct was that Guevara’s DQ was unreasonable, but the problem is she acted like it was a big joke, which was pushing the bounds of sportsmanship a little too far. If she had cruised a 58, and kept a low profile about it, I don’t think she would have been DQ’d. She probably didn’t even know there was a rule — I didn’t — and it’s unfortunate for her and the team that she had to be the example everyone will learn from.

It’s the water splashing and laughing for me.

I’m also surprised at the DQ on Northwestern last night, partially because I’ve seen many swimmers do the exact same strategy to maximize points in the past. Also, if you’re going to DQ people for not giving enough effort, what about when someone cruises prelims to save up for finals and place better? It just doesn’t seem like a rule that can be enforced fairly or uniformly across competitions.

Swimmers have obviously sandbagged races before.

We found one other example of this being called. Check in tomorrow morning to read about it…

As someone who has pulled tough doubles in conference meets, I’m not really mad about the DQ. I get the strategy behind the choice but did she save that much energy between going a 1:02 versus a 55/56? I would guess, no. If I was the 9th/17th/25th place swimmer I would be frustrated to watch this. There’s a clear visual difference between someone sandbagging and someone who is hurting in a race.

I don’t buy the argument that it’s unfair to the 9th/17th/25th place swimmer (you didn’t exactly say unfair, but other people have). She legitimately earned the spot in the A-final, and they didn’t. Everyone knows that for swimmers on the bubble, prelims are sometimes more important than finals, and making the A-final, or B-final or whatever is sometimes more important than how they swim in said final.

Never said it was unfair for 9th/17th/25th! Just said it was frustrating, especially when it’s in the rule book. At the end of the day I’m not sure if there’s a “right” answer here, clearly a grey area – just a swim fan like you sharing my thoughts anonymously.

Then 9/17/25 should have swam faster in prelims. Prelims is for times, finals is for places.

If the team scores matters to the team (which in most cases it does), then a fast swim in prelims gets you into position to score max points at night. Once in finals, what matters is relative place compared to other teams. YMMV. Honest effort? That’s subjective. She had two finals, so she put in an “honest effort”. She didn’t do corkscrew…

Stewie/Binky – please adhere to SwimSwam commenting rules and stick to one username in a thread. Thanks!

Looks like Coach Katie Robinson has handled the transition to head coach beautifully! Nothing but success, team records, and moving up in the Big Ten.

I watched her grow up as an age group and high school swimmer in Indiana. It couldn’t happen to a classier, nicer and more genuine and exceptional person. The sport is so lucky that she chose coaching as a profession!

Good luck to all and nice to see more depth in BIG. Guevara DQ is BS like all the non NCSt DQs at ACCs. That hurt 20 points and IU 200 Medley 52 points gone in 1st race for Backstroke toes. Judges try their best and are volunteers but maybe pre meet conferences with team coaches and captains about points of emphasis so all know what they are getting into. Co frats to all for making it thru worst training year with Covid rules. Better years ahead!

I agree with all the DQs I’ve seen this week. Guevara obviously sandbagged and should be penalized. The ISL you actually lose points and nobody seemed upset with that. And the multiple dolphin kicks needs to get under control.

Indiana has better divers…Unfortunately without Sheridan Calypso it will be tough for the Cats this year to claim 3rd place. It’s a pity that Miriam Guevara got DQ for her “poor effort” in the 100 back final. It’s absurd in my opinion because what if she swam a life time best and right after added 10+ seconds in the 200 fly because of exhaustion? Would she be DQ also?
Good Luck to the Cats!!

This will be fun! Go IU! But I hope both squads have a great meet tonight!