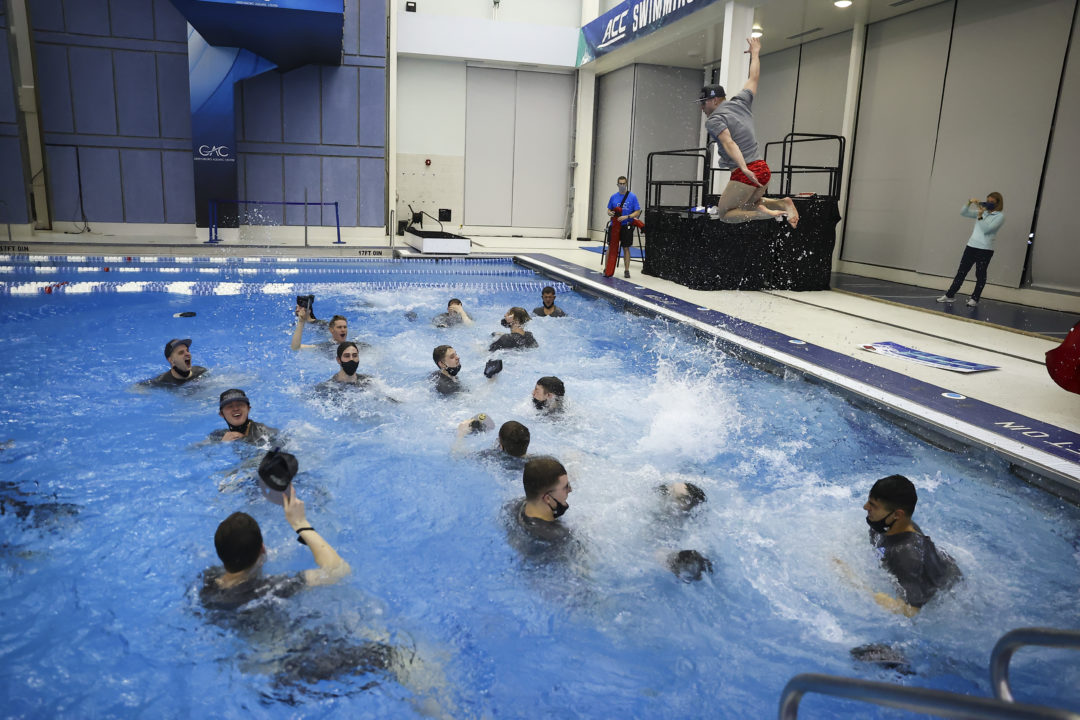 In perhaps the most exciting ACC Men’s Swimming and Diving Championships in recent memory, the Louisville Cardinal men topped the NC State Wolfpack by two points to capture the Cardinals’ first ACC Championship.

The Cardinals joined the ACC in the 2014-2015 season, and under Head Coach Arthur Albiero they have been in the thick of things ever since, taking 2nd behind NC State every year from 2015-2019, then slipping to 3rd last year after getting their 200 medley relay disqualified on the first day of competition.

This year, it was NC State’s 400 medley relay disqualification last night that proved to be the difference, but that’s no slight on a powerful Cardinals team that won a total of 7 events:

Somov won his 4th-straight title in the 100 breast, while Albiero won match that feat in the 200 fly. Whyte won the 200 back after finishing 2nd the last two years. But what really stood out for the Cardinals was the increased contributions from some of the guys further down the roster.

Sophomore Ilia Sibirtsev came up big with a 3rd-place finish in the 1650, scoring a total of 40 points after scoring 7 last year. Tanner Cummings increased his individual points from 11 to 42, while Michael Eastman went from 27 points last year to 58 this year, and both men were a key part of Louisville’s sprint free relays. Haridi Sameh, who already had a solid showing last year as a freshman, took it to another level this year, finishing in the top three in both sprint freestyles and taking 9th in the 100 fly.

Coach Arthur is an amazing coach. He is gifted with integrity and class. So happy for him, his family and the team. No slight on NCSTATE which is amazing, as led by Coach Holloway (another gentleman and great leader). That first championship is special! Congratulations!!!

And for another of the annual reminders that it is swimming AND diving, Going into the swimming portion amongst the top 4, it was UL 120, NC State 62, VT 142, UVA 0. VT and UvA 3rd and 4th regardless, but that 58 point diving difference was essentially the same as another relay DQ. State has to up their diving game to compete with Texas and Cal annually. Watching UNC start at 214 and only score 515 points more points through the week to go from first to sixth was just so painful, I guess diving can give false hope and take it away.

They definitely need to step up their diving.

NC State will be back.

The disrespect for Ohio State. They won their 2nd straight title and you make the headline about louisville? Louisville only won by 2 points! Ohio state dominated!

It’s impressive that Ohio State snuck into the ACC without anyone noticing.

15 meter violation by the leadoff swimmer.

Congratulations to Louisville! The team swam great! So many impressive swims!

What a meet. Fantastic.