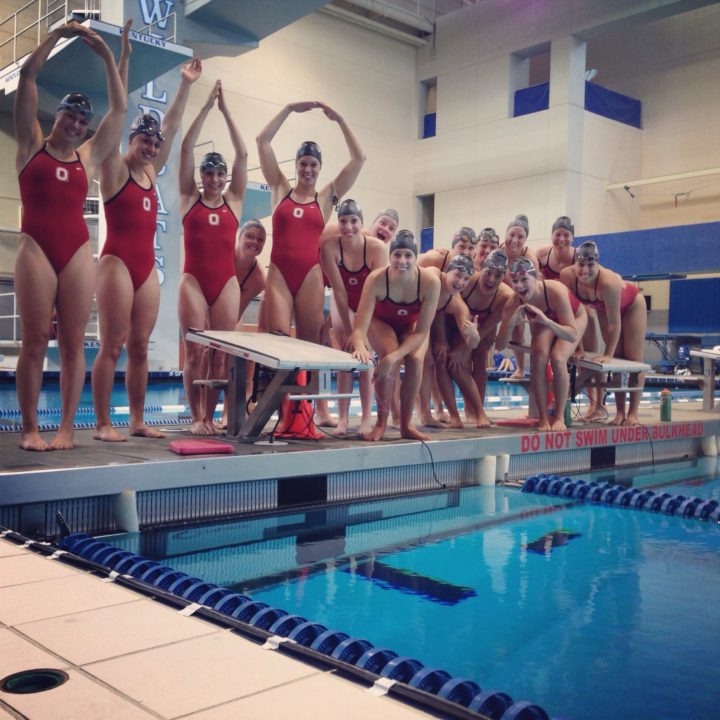 The Ohio State University starts off their season 1-0 while on the road across the border to University of Kentucky (Photo Credit: Amanda Smith)

The Buckeyes traveled down to the University of Kentucky in Lexington today to take on the Wildcats. The home meet for UK marked Head Coach Lars Jorgensen’s first meet of his tenure. Quite the crowd filled Lancaster Aquatics Center on 5PM EST this Friday, with the pool reaching a capacity crowd.

Women’s Head Coach Bill Dorenkott said, “I am very pleased with how the women raced and supported each other in their first duel meet of the season.”

“I thought we fought hard,” UK head coach Lars Jorgensen said. “We lacked in a little bit of depth to compete against a very good Ohio State team. We had some bright spots from our captains and are leaders on our team, and it was nice to see the freshman with some strong performances. We need more people to contribute, we just ran out of steam at the end.” (taken from official UK press realease)

University of Kentucky got an advantage when they were able to sweep all four diving events. Senior Greg Ferrucci and junior Christa Cabot won both the 1m and 3m events.

When the pool events got started, the Buckeyes came away with victories in both the women and men 200 medley relay. Reanna Dona, Ashley Vance, Phoebe Cater and Michelle Williams finished 1:44.01. Williams had a great anchor leg of 22.82 to highlight the relay.

The OSU B relay would go to finish second, and Kentucky’s women team was third.

Kentucky was able to finish second with a very fast anchor leg from Eric Bruck, who was 19.29.

The 1000 freestyle turned out quite a race on both sides of the meet. Buckeye’s Lindsey Clary & Kelly Ann Baird, plus Wildcat Kendal Casey swam solidly together for the first two thirds of the race. Then the Buckeyes made their move and it was a race between the freshman and senior.

The men’s race was just as exciting. Senior Alex Miller from OSU was out to an early lead on the field, of nearly a body length, but fell off the pace that UK’s freshman Brandon Flynn was pressing. Sophomore Jovan Mitrovic, OSU, swam very strategic staying at Flynn’s hip and slowly sneaked up and battled all the way in the last 100.

Sophomore’s Annie Gillig and Camey Rabold, plus freshman Amanda Petro led a 1-2-3 sweep in the 100 backstroke. Gillig controlled the race with her great underwaters, finishing at 56.63.

The men followed the women’s suit with a sweep led by junior Zimmerman. He was 49.24 and his classmate Connor McDonald was also under the 50 barrier at 49.83.

Freshman Amy Bopp won the 100 breaststroke in a solid 1:04.23. Kentucky was able to stop another sweep with freshman Kendra Crew and junior Sam Shaheen finished third and fourth.

The men’s race was a bit tighter to the finish. The Buckeye’s were on the upside of a three man race between OSU’s junior Stevenson and sophomore DJ Macdonald and UK’s junior George Greenhalgh. They would finish 56.23, 56.49 and 56.85 respectively.

Kentucky saw their first victory in both the 200 butterfly. On the women’s side junior Christina Bechtel and Abby Myers finished first and second. Bechtel touched the wall in 2:00.75, with Myers close behind, 2:01.00.

With the graduation of Shannon Draves, Ohio State is hurting in this event. Their best finisher was third, but at 2:06.84 from senior Cater.

Senior Williams from OSU followed up her impressive anchor split on the medley relay to take the individual 50 freestyle, at 23.40. Kentucky got another victory in the men’s splash and dash from senior Bruck, in 20.18.

After the first break, the Buckeye women laid the hammer. They swept the 100 freestyle 1-2-3 with junior Aliena Schmidtke leading the way with a very fast final 25, to finish 50.84. Williams was out first at the wall, but got out ran by her teammate and finished at 51.03.

Sopohmore Gillig ran away with her second event of the evening. She won the women’s 200 backstroke at 2:00.60. Kentucky’s freshman Danielle Gayler touched second, over three seconds behind at 2:03.80.

Bopp took the second breaststroke event of the evening with a commanding 2:18.05. She finished over four second ahead of her next competitor, freshman Crew of UK. Bopp looks poised already to have a solid contributor to the Buckeye’s breaststroke this season.

Macdonald won the longer breaststroke event of the meet, finishing two seconds ahead of his teammate junior Dimitry Dolgov, 2:02.77 to 2:04.77.

Back to the distance races, again the field was even just past the half way mark. Baird, Norris, Clary and UK’s Casey swam together until Baird and Norris broke off. Baird only gained momentum as the race went on, negative split it in fact, to finish 4:53.73. Norris was behind at 4:54.41.

Kentucky once again showed their butterfly dominance taking the 100 butterflies of both genders. Bechtel and Myers finished 1-2 again, 54.34 to 55.30. Fourth place finisher Annelise Sprau, OSU freshman, finished at 57.6 right on her lifetime best.

Sprau has a lot of power, and the way Dorenkott developed Draves, we could easily see it here in Sprau over the next four years.

The meet ended with the 400 freestyle relay. Ohio State’s A relay ran away of the field with Annie Jongekrig, Schmidtke, Norris and Williams finishing 3:25.29. Finishing their first duel meet of the season the Buckeyes had solid splits from Schmidtke split 50.40, while Norris and Williams were 51-lows.

In a battle to the last 25, UK’s A team was able to get the second place over OSU’s B team, which ended up exhibitioning.

Ohio State will host their annual intersqaud, Scarlet vs. Gray, at home 10/18 at 5PM. The men will then have Alumni vs. Varsity 10/19. The women and men will be back in duel meet action 10/25 at home versus Kenyon.

UK returns to the road Oct. 24 and 25 when it travels to Carbondale, Ill., to face Southern Illinois and fellow SEC foe Missouri. The competition will get underway at 5 p.m. ET on Oct. 24 and resume at 10 a.m. on the 25th.