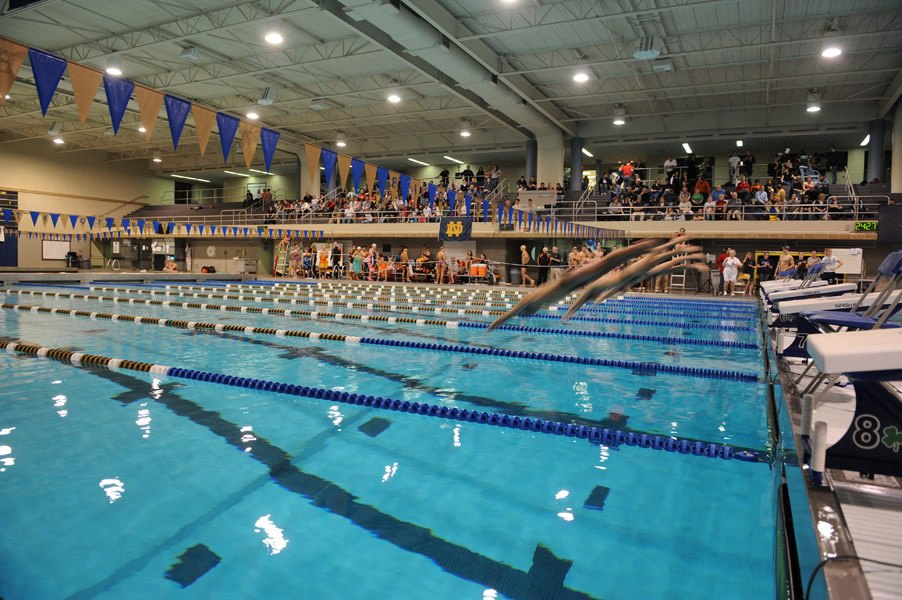 Hoagland's swim moves him #2 in the nation (unofficially) so far in this still-young, unusual season, behind only Texas freshman David Johnston. Current photo via Courtesy of Notre Dame Swim Camp

Notre Dame sophomore Jack Hoagland tore up the pool over the weekend, ripping a 8:51.86 in the 1000 free as Notre Dame and West Virginia competed in a virtual meet from each school’s home pool. That mark set a new Notre Dame pool record.

Over the course of the two day competition, Hoagland also won the 500 free in 4:16.87 and the 400 IM in 3:46.42. The Fighting Irish swept the top four in those two events, along with the top three in the 1000 free. Notre Dame’s release indicated that the times for the meet would not count for the purpose of NCAA qualifying, but if they did, Hoagland’s times would move him to #3 in the 500 free and #4 in the 400 IM in the nation so far this season, while his 8:51 would put him 2nd, behind only Texas freshman David Johnston’s 8:45 from a couple weeks ago.

Last year, Hoagland was one of the big surprises of the NCAA season. Arriving in South Bend relatively unheralded, Hoagland went on a tear early and then continued to drop time much of the season. He ended up being seeded 11th in the 500, 10th in the 400 IM and 4th in the 1650 for the 2020 NCAA Championships that were ultimately canceled.

Saturday was the second of two sessions in the virtual meet. Both teams executed the same events at their home facilities, and times were ranked after the session concluded to determine rankings and winners. Times achieved at the meet count for program and pool records, but will not count as NCAA-qualifying times.

“Both teams raced incredibly hard this morning after a quick turnaround from yesterday’s session,” Irish head swim coach Mike Litzinger noted after the meet. “We put them up against the wall on purpose to see how they would respond, and they responded very well.”

“It was exciting once again to get off the blocks, get off the diving boards, and have some fun with this virtual meet. We’re looking forward to a day where we can compete with another team head-to-head, and that’s coming up soon in December.”

The Irish took first in 17 out of 18 swim events Saturday, while sweeping the diving events. In addition to Hoagland’s pool record 8:51.86, which topped the previous pool record of 8:57.69, another notable performance came from freshman Sydney Whiting, who placed first in the women’s 200 Free (1:48.84).

“Our relays truly stepped up and are starting to gel,” Litzinger added. High points came in each relay, in which Notre Dame posted a clean sweep.

In the 200 Medley relay, the women’s team of Carly Quast, Ellie Jew, Cailey Grunhard and Rachel Wittmer turned in a 1:39.36, while the men (Brendan Santana, Josh Bottelberghe, Zach Smith and Cason Wilburn) marked a 1:27.97.

In the 400 Free relay, Skylar Fore, Grunhard, Peyton D’Emanuele and Kallie Chelsvig turned in a 3:21.51 for the women, and Wilburn, Alec DeLong, Santana and Sadler McKeen posted a 2:58.19 for the men.

“Overall, we had a good day, an improvement from last night,” head dive coach Mark Bradshaw said. “Annie Wiese was consistently good both days, Kelly Straub finally let loose on 3-meter with a fantastic six-dive list, and Austin Flaute had a really steady day, as well, with a really good 3-meter event.”

According to Bradshaw, Straub, Wiese and Flaute attained zone-qualifying scores in both the 1-meter and 3-meter events, while David Petrison also marked a zone-qualifier in the 1-meter.

The Irish are scheduled to take on their first in-person meet Dec. 4-5 in Indianapolis against IUPUI and Cincinnati.

MORGANTOWN, W.Va. – The West Virginia University men’s and women’s swimming and diving teams completed virtual competition against Notre Dame on Saturday, Nov. 7, after two days of action at the Aquatic Center at Mylan Park, in Morgantown.

The virtual meet began on Friday, Nov. 6, and continued on Saturday, as the Fighting Irish swam at Rolfs Aquatic Center in South Bend, Indiana, and the Mountaineers swam at the Aquatic Center. Following each session, the two teams compared times to get final results.

Friday’s action was highlighted by sophomore Emily Haimes’ win in the 100 freestyle, as she was the first to touch the pads in 50.17.

On Saturday, the Mountaineer sprinters shined in the 50 free, taking the win in the men’s event and claiming two of the top-five spots in the women’s race. Senior Ryen Van Wyk captured a win after touching the wall in 20.45, while Haimes and classmate Harna Minezawa used their speed to place second (23.29) and fifth (23.75), respectively.

“I was really proud of the teams this weekend,” coach Vic Riggs said. “They competed very well and had great energy. We’ve been doing some internal test meets the past few weekends, but knowing that Notre Dame was competing at the same time really added to the intensity, and the results indicate that.”

In the diving well, the teams were paced by redshirt junior Jacob Cardinal Tremblay and sophomore Holly Darling. Cardinal Tremblay finished in third place on 1-meter (295.05) and 3-meter (289.20), while Darling also notched a third-place finish on 3-meter with a mark of 254.10.

“In this COVID-19 season, we have been gifted with the opportunity to have very focused practices,” first-year diving coach Karla Heldersaid. “So, our competition with Notre Dame was a lesson that early-season focus is about how you’ve excelled in practice and can bring that into the competition. I thought our kids did a great job with that this weekend.”

Additional highlights from Friday included the men’s 200 free relay, as the team of seniors David Dixon, Max Gustafson and Van Wyk and sophomore Roberts Zemturis grabbed second place with a combined time of 1:22.19.  Senior Ally VanNetta also notched a second-place finish in the 200 backstroke (1:58.97), while Dixon (48.14) and Haimes (54.43) paced the Mountaineers with a pair of third-place finishes in the 100 butterfly.

Dixon added another second-place finish in the 200 fly on Saturday, recording a time of 1:46.04. The Mountaineers also added a third-place finish from VanNetta in the 100 back, as she completed the swim in 55.31.

A full list of results from Friday and Saturday’s virtual action against Notre Dame can be found at WVUsports.com.

During this weekend’s meet, 15 newcomers saw their first action in the pool for WVU. West Virginia now prepares for the start of its official 2021 competition schedule, which will be announced at a later date.

Did Notre Dame storm the pool deck after this?