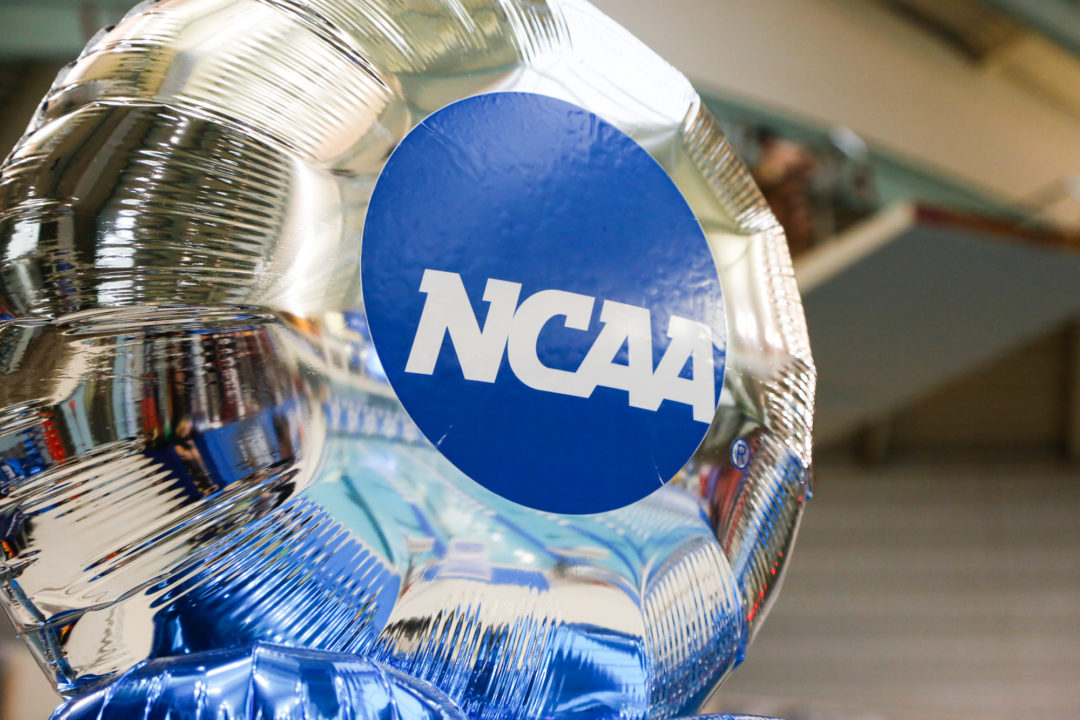 The NCAA announced that it would be "modernizing" its rules that currently prevent student-athletes from profiting from their names, images, or likenesses. Stock photo via Tim Binning/TheSwimPictures.com

The NCAA announced today that it would be “modernizing” its rules, allowing student-athletes to earn compensation based on their names, images, and likenesses.

The NCAA‘s Board of Governors met this week, agreeing to allow athletes to receive compensation for things like social media, personal businesses and personal appearances, provided they fall under a set of guiding principles established by the board. The NCAA release made clear that schools are still not allowed to pay athletes, but athletes can now earn money from third parties in certain cases.

There isn’t a whole lot in the release in the way of specifics, but the NCAA’s official timeline says each division should have proposals ready by September 1. Here are some of the key points of the press release:

Name-image-likeness, or NIL, compensation has become a major topic in college sports. The NCAA has long prohibited athletes from profiting from their statuses as NCAA student-athletes under its strict amateurism principles. But the state of California pushed the issue last fall, passing a bill that allowed student-athletes in that state to earn NIL money, though the NCAA had originally threatened a postseason ban on California schools if the law passed. With other states following in California’s footsteps, the NCAA backed off of its original stance and said it would soften its amateurism rules.

Prohibiting NIL money has been an unpopular NCAA feature, in part because of cases like the two Iowa swimmers who started a T-Shirt business, cases where student-athletes were prohibited from money-making opportunities that had little, if any, connection to sports.

The NCAA release didn’t go so far as to abandon its ideals of amateurism entirely, though. The guiding principles for the rule modernization still drew a sharp distinction between collegiate athletics and professional athletics, and expressly forbid schools from compensating athletes for athletics performance or participation.

The release also made a point to note that student-athletes will still be considered students and not employees of a school, perhaps continuing to lay groundwork against any resurgence of a 2015 campaign for student-athletes to form a union and collectively bargain with schools as employees.

The NCAA is still not paying anyone. They should not interfere with any third party revenue that their athletes (that THEY make money off of) get. It’s practically theft.

This is better than nothing though.

Have the rules been revised so that any money received doesn’t count against an athletic scholarship? In my area a female volleyball player once gave back an area athlete of the year award because it would have counted against her scholarship money at a D1 institution. Just asking.

What does this mean for national team member stipends for swimmers who are still in college?

Haha, time to become the most endorsed college athlete. I mean most endorsers not most money.

I think social media would be a great market for college swimmers. Especially given that there are lower level swimmers making plenty of cash advertising for companies on their accounts without giving out any of their personal information to promote it, essentially avoiding any conflict.

can you elaborate on ‘avoiding any conflict?’

Difference – hi I’m John Doe here is how to do a good breaststroke, and here is a good workout to do from home.

So does this mean EA Sports NCAA Swim21 can be released?

Unfortunately, word from the working group has been that a return of the NCAA Football games is still “unworkable”: https://www.yahoo.com/entertainment/the-nca-as-loosening-of-name-image-and-likeness-rules-doesnt-mean-an-ncaa-football-game-is-coming-back-152000715.html

But I still think about what an NCAA swimming video game could be like on probably a weekly basis. Maybe the ISL will find a market for something like that.

My vision for what it looks like is that the game would have the data for every swimmer in the NCAA. They would use this and then make it so that someone controlling that swimmer could at a maximum swim some percentage faster than their best time, say 3% for example.

There could be a story mode where you take over a team as the coach and train your swimmers where you essentially decide how much you want to rest them for certain meets/how hard you train them, etc…, and these factors determine what times are possible at dual meets and what % time drops are possible for them at championships. How much of the 3-5% improvement someone gets out… Read more »

Love this. I’ve geeked out over it a bit myself. Would love to see various skill stats like they break down to in football games: open turns, flip turns, starts, relay starts, endurance/speed/technique for each of the four strokes, fatigue (how fast you bounce back between swims within the same session), underwater kicking.

Then you, as the coach, get to partition your 20 hours a week of training time into the various skills to help ‘develop’ your team, while recruiting swimmers with the skillsets you like. Throw in training vs rest across a season, and then for actual meet competition, some sort of strategic balance between going out fast and pacing to conserve your energy for the remainder of the… Read more »

I think another really interesting part of the game could be recruiting. That was always one of my favorite parts of the NCAA football games when they were around

I still play an old NCAA football game every now and then. I think the most realistic part of recruiting has to be the typos and bad grammar in the responses from these high school prospects 🙂

I LOVE swimming, but a swimming video game is a HORRIBLE idea. There’s a reason only ball/puck sports are popular video games.

Hypothetically, could Ledecky compete for Stanford again? Considering she hasn’t graduated yet, if she waits until 2022 after the Olympics to finish college, could she use her last year of school then and swim at NCAAs? I mean she’s already training at Stanford, so what would be the big deal with going to some dual meets and having a fun NCAAs the year after Tokyo?

It would be petty, spiteful and pointless to specifically prevent athletes who went pro but remained students from returning to college competition. So the NCAA definitely won’t allow it.

Ledecky might fall foul of the upper age limit anyway.

I’m not sure that Ledecky going pro was 100% about the money so much as it was about “having full control over her time.”

I don’t think Ledecky could compete again in 2022 because i believe an NCAA athlete has five years to compete in four seasons based on the first year they enrolled and competed.

They can feel the walls closing in