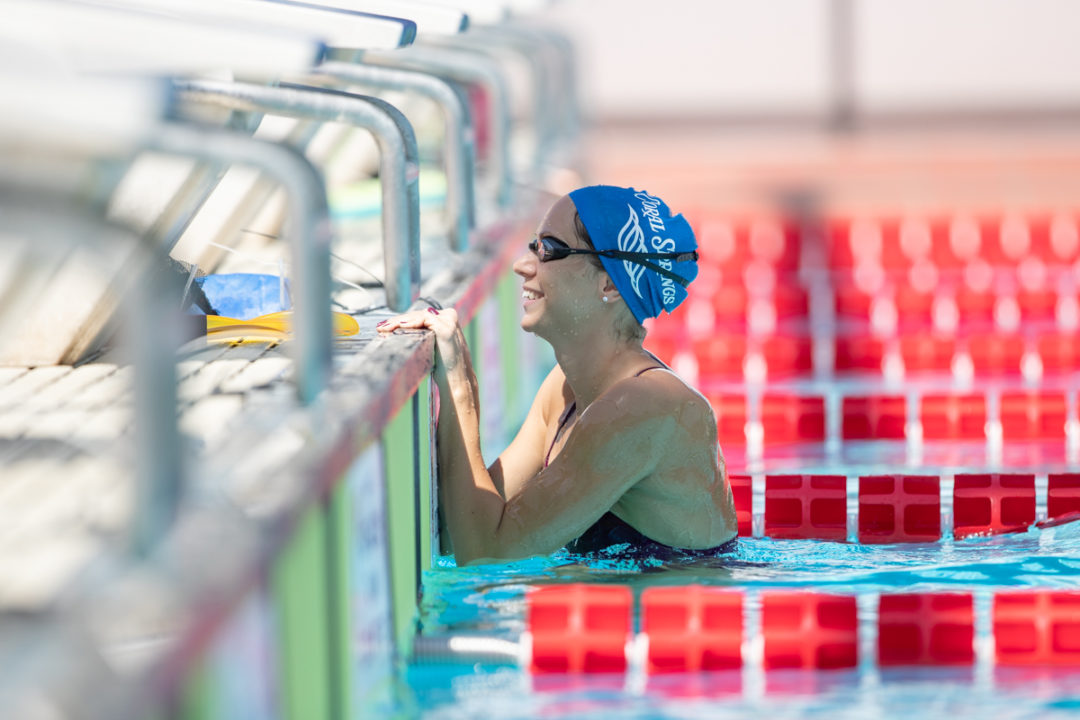 National Training facilities reopened this week in Hungary for elite swimmers, including Boglarka Kapas (above), who tested positive for coronavirus. Archive photo via “Rafael/Domeyko Photography”

After 6 weeks out of the water, which includes a full 2 week isolation after a positive test for coronavirus, World Champion Boglarka Kapas returned to training on Monday.

“I think this picture captures how I felt today when I could swim again after 6 weeks out,” the caption on her Instagram post reads.

Kapas, who was the 2019 World Champion in the 200 fly, tested negative for the coronavirus 2 weeks ago following a 14-day period of isolation. She is one of at least 15 swimmers or coaches affiliated with the Hungarian national team who tested positive, though she never showed any symptoms.

While this was Kapas’ first time in a full-size pool, it wasn’t her first time in any pool – shortly before her isolation ended, she was training on a tether in a small above-ground pool.

After initially making an effort to leave a national training center open, Hungary suspended all training until April 15th after several swimmers tested positive. To return to training now, athletes must undergo multiple tests, including blood tests, that come back negative. That closure was ultimately suspended until April 27th.

According to social media posts, Kapas was joined in training at least by her boyfriend and fellow international swimmer Adam Telegdy at the Duna Arena (Danube Arena) – the facility that hosted the 2017 World Championships.

According to Johns Hopkins University, Hungary has seen 2,727 confirmed cases of coronavirus and 300 deaths caused by COVID-19.

Other Swimmers Back in the Water

A number of other swimmers in countries where training centers are not reopening yet have found their way back into pools none-the-less anyway.

A few years back, while at the meet in St Pete, we stayed at the house with one iine regulation {25yrd) pool. It belonged to a former Div 1 swimmer. If someone is interested, you might see if it is available for rent now via VRBO (aka Home away) . Address:
4183 Coquina Key Dr SE, St. Petersburg, FL 33705

I am genuinely worried about the pool MA is swimming in. His span could easily cause him to smash his hand against a side wall.

Don’t count the age groupers out. My eleven year old has been swimming tethered In a wetsuit at a neighbor’s pool the last few weeks. Many of her teammates are doing the same. Where there’s a will, there’s a way. We’ll all be back soon enough…keep the faith.

I’m rooting for age groupers too — but seeing some pros find some creative swimming options makes you SAD? c’mon now

Anyone know why Michael Andrew and family moved from their backyard pool in Kansas (?)

I vaguely remember it being a dream of his sister(Michaela?). The whole family had been completely enthralled in Michael’s swimming dream up to that point, and did something that was more fitting to her dreams— moving to Cali. Though this theory was brought up by the swimswam comment section, so take it with a grain of salt.

More realistically, they all found the thought of moving enjoyable. If the amount of surfboards isn’t evidence enough, they’re all happy with the move.

MA addressed the move on his youtube video and he said it was for Michaela.

lol what a bizarre looking pool that Andrew is in

Yep, it seems to be a hybrid recreation/lap pool.

I would too but maybe a little wider?

I think it is probably decently wide, but I would bet that Michael makes it look small. I mean, off a quick google search his wingspan is around 6’7. That would make most lanes look small.

It appears that most of the top swimmers have found pools to train in throughout this pandemic. Here’s the NYT article from earlier this week that talks about Katie Ledecky and Simone Manuel swimming regularly in a 2-lane 25yd backyard pool. https://www.nytimes.com/2020/04/26/sports/coronavirus-ledecky-olympics-swimmers.html

Mel Stewart gave one of his gold medals to his benefactor after the 1992 games. I wonder if KL will give one of her Tokyo golds to this gentleman https://ishof.org/tod-spieker.html (just a joke).
Stay positive, everyone!

I bet the one lane pool reminds him of the homestead.