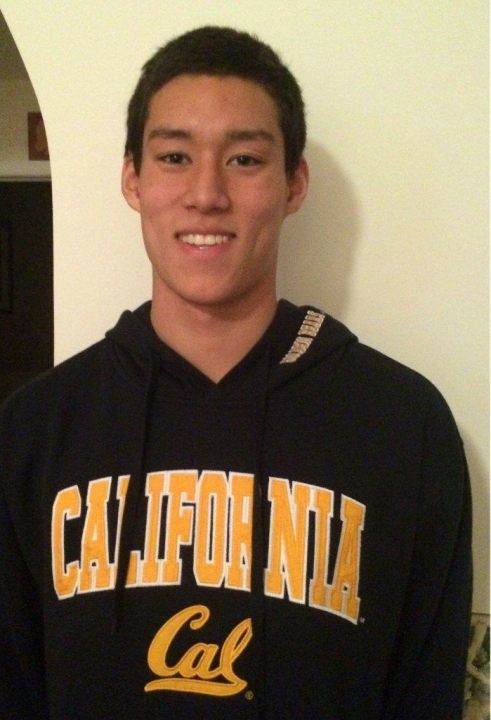 Michael Thomas of Horsham, Pennsylvania has given a verbal commitment to Coach Dave Durden and the California Golden Bears. Thomas...

Michael Thomas of Horsham, Pennsylvania has given a verbal commitment to Coach Dave Durden and the California Golden Bears.

Thomas is the current national age group record holder in the boys 15-16 100y backstroke. The previous owner of that mark is none other than two-time NCAA backstroke champion Ryan Murphy, currently a sophomore at Cal.

Thomas swims with Upper Dublin Aquatic Club and is a member of their national age group record boys 15-16 400 free relay, along with Wyatt Amdor, Jake Sannem, and Michael Jensen. He had an outstanding short course season with UDAC, culminating in the Middle Atlantic Senior Championships in March where he won the men’s 50 free, 200 back, 100 fly, and 200 fly, was on their first-place 800 free relay, and led off their winning 400 medley relay and 400 free relays (the latter of which was the NAG record-breaker).

At Cal, he will be joining arguably the top backstroke/butterfly training group in the country, both areas where he shows tremendous promise. With the best backstroker in the NCAA in front of him for at least the first two years of his college career, Thomas will have his best chance at a relay contribution swimming butterfly, but individually he and Murphy will make the country’s best backstroke tandem in 2016.

Roll on you BEARS!

I’m a Cal fan who lives a few miles from the Cal campus and it amazes me when I see all the phenomenal aquatics facilities like Stanford, USC (one from LA hosting of the Olympics), Texas, Georgia, Florida ad nauseum, and then go to Cal meets with a facility that is comparatively smaller and looks something like maybe an old Ivy League site. Yet is fun to be a spectator so close to the water and the competitors if you can get a seat!

So the draw to Berkeley may be some of the reasons cited elsewhere here (National Championships, great coaching staff and top rated public university), but I would add—having watched the Cal teams for years—there really… Read more »

yup. I really wish they would get started on that new facility too. I’m not sure if the new pool would accommodate more fans, but I hope it does. Some of the meets last year were really packed. Especially for girls. I can’t wait for the Big Meet with stanford this year. To my knowledge, the men’s team and the women’s team are having the meet together. But I might be wrong.

would be great if they ran a collective meet, men and women, Cal vs. Stanford. the talent at that meet! WOW! however, according to the Cal website, the W meet is slated for 2/14 and the M meet a week later on 2/21. maybe you know more…and I’m hoping you do 😉 they do a Cal vs Arizona meet with both m & w teams…why not with Cal and Stanford? perhaps because it is getting closer to the W Pac 12 meet…

Agree with you Royale…I’m partial to Cal Poly (alumni, but didn’t swim for the team). It’s a growing program with a beautiful new facility, and they now compete with the Pac12. But the little meet they do with Cal shows the depth differential, which is hard to overcome.

In my mind, CA has 3 “tier 1” men’s programs for swimming (USC, Cal, and Stanford). Sadly should be four (come on UCLA), but I digress. Cal will get a lot of looks just because it is public, and a great institution.

I do wish some of the other “tier 2” programs would get a few more looks, but the attraction of training with and competing for titles is a huge draw.

I couldn’t agree more that some of these athletes would have a great experience at schools like Pacific, UCSB, Cal Poly, or UC San Diego in the state of CA. Beautiful schools that are strong academically and have a proven history of strong D1 (D2 in UCSD’s case) swimming. No disrespect to Cal, but the reality of making the top 18 swimmers (if you include a spot for diving it’s only 17) makes it very challenging for a lot of guys on the team to get a chance to really show their true potential.

However, Cal is smart to recruit hard for the in-state athletes and they probably offer small athletic scholarships because the families are willing to pay $25k… Read more »

Congrats to Thomas! To the Cal program too for yet another killer get.

On the flip side of the coin, Durden may be getting close to his scholarship limits to comfortably afford a full ride to a third top 10 recruit. Not that he’ll really be in much need at this point I guess!

Could potentially impact the women’s side and help equalize the balance of power though. Let’s consider the hypothetical scenario where there aren’t enough funds remaining at Berkeley for an in-state like no.5 Burns or no.7 Cogswell. In the latter’s case, if Cogswell ends up committing to the Wildcats or Trojans as a result, look for the women’s no.2 recruit Weitzeil to follow suit.

OT – OK hadn’t seen the Toris commit to USC when writing my comment.

This would then diminish the likelihood of Cogswell & Weitzeil choosing USC, assuming they would want to remain together in the same college.

Perhaps Capitani would be the beneficiary, considering her recruiting momentum as of late down in Austin? Still think Arizona would be the frontrunner for these two, if there’s no room for them in Berkeley.

Bystander: Interesting scenario regarding Weitzeil and Cogswell but I think those swimmers would make independent choices about college rather than approaching their next 4 years as a package deal. College choice is one of the major decisions in a young person’s life and it’s very much a personal and emotional issue as it is an analytical issue. Granted, their Canyons team mate Tamara Santoyo did sign with USC but that’s an independent event and the choices for Weitzeil an Cogswell are also independent. Look at the super swimmers on Nation’s Capital Club who were all top 10 national recruits. Each chose a different school although all ended up in California – Ledecky to Stanford, Seliskar to Cal and Vissering to… Read more »

Interesting conversation, but it’s all for naught. NerdNation, the world’s foremost expert on college swimming, has stated multiple times that Abbey Weitzeil is going to Stanford. She’ll be visiting along with Baker and McLaughlin. I’m sure he/she will be here shortly to trash Cal and Cal swimming as usual when someone commits.

Wow Cal is gona have another dynasty. I knew they graduated a lot of money last year but the recruits they are bring in are ridiculous.

the rich keep getting richer! I’m going to agree with Bobo here, there is no more competition in the NCAA team races. Cal is going to win, win, win.

Nothing is a sure thing. Last year you would have thought the Cal women were a lock too, but Georgia won. With a great pool of talent also comes difficulty with managing egos, fairness on who is and is not on a full/partial scholarship, and swimmers who are used to being the top dog on the team that are now second fiddle. Remember USA beat USSR in ’80.