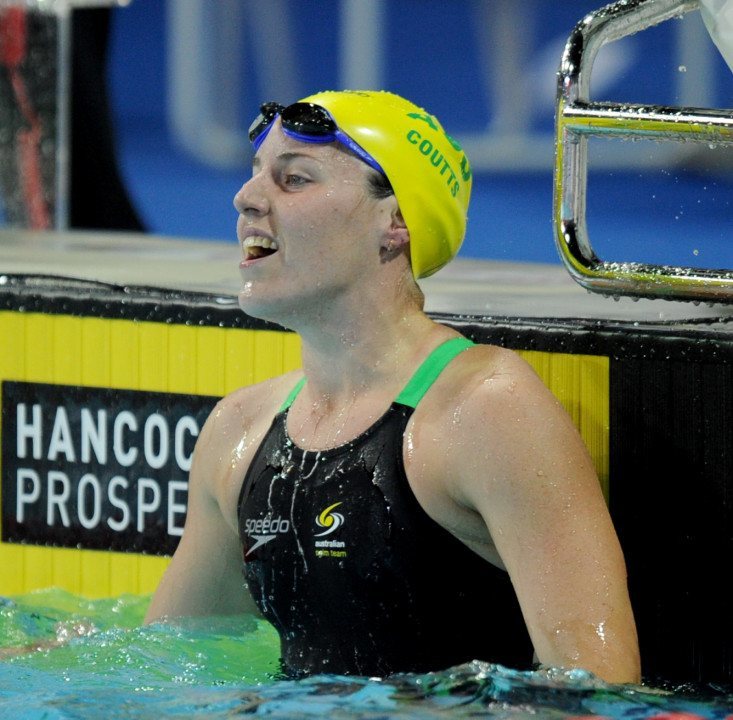 Australian superstar Alicia Coutts talks about how she has had thoughts of retiring from the sport... Current photo via courtesy of Scott Davis

Australian superstar Alicia Coutts has collected five Olympic, eight World Championship, seven Commonwealth and six Pan Pacific Championship medals in her career. In an interview in the Sydney Morning Herald she told Chris Dutton that if she was to retire today that she would be happy with what she has accomplished in the pool, “If I retired tomorrow, I would be satisfied with what I’ve done in the sport. I know I’ve given it everything I’ve had, I’ve come away with some big medals … but I just don’t know,” said Coutts.

Before the Commonwealth Games Coutts announced that the games in Glasgow would be her last, “I’ll be 30 years of age in four years time so these will definitely be my last Commonwealth Games,” Coutts told the Herald Sun at the time.

At the time she also spoke about having to reinvigorate herself after the World Championships in Barcelona, “After the world championships last year I re-evaluated a lot of things in my training and started to do some things differently,” said Coutts.

“It’s given me a bit more love for the sport again instead of just plodding along doing the same thing over and over again.”

Even though she did experience success at both competitions this summer Coutts spoke seriously about retirement in the interview with the Sydney Morning Herald, “I’m looking towards Rio and if I swim until then, I’ll be done after that,” said Coutts.

“I have days when I think, ‘Yeah, I can swim until Rio. It’s not that far away.’ But then other days I’m ready to retire straight away.”

She also talked about how her life outside of the pool will be a strong factor in whether or not she continues to compete up until Rio, “It’s more things outside of swimming, I’m getting married next year and my fiance and I would like to have children,” Coutts said.

“If I swim to Rio and retire, I will be 29. We’d like to have a family and we’re thinking about that.”

There was also a very real emotional tone in the article when it came to how she felt about the bonus money that Swimming Australia owes their athletes, “We haven’t got any bonus payments yet, but I don’t know what’s going on. In a Commonwealth Games year it is different, they have to wait until big meets are finished and in 2010 we didn’t get any bonus payments either,” said Coutts.

“It’s a kick in a teeth everything that’s happening. A lot of people are under this false belief that we’re like AFL players and we get paid all of this money.”

“If it is the case that we don’t get our bonus money, it’s a big blow. We have to live off that, it’s our job. There’s some negativity out there and it’s depressing to have articles that bag us out.”

“I thought everything [in swimming] was going well, we’re trying really hard to rebuild ourselves and the negative stuff to break us down is disheartening.”

Whether or not Coutts decides to hang up her goggles or push on to Rio she has had a career that most only dream of. When it is all said and done Coutts can walk way not only satisfied with what she has accomplished, but proud of how and the success she has had representing her country.

Coutts is one of the most underrated swimmers in the World and a classy lady too. Now if she’s going to retire, who will swim for Team Australia in the butterfly leg? That’s the weakest leg for Team USA in the medley relay.

Most likely Maddy Groves or Emma McKeon. They already swam 57mid, and are still youngish and maybe can improve

Correct on five I will correct the typo