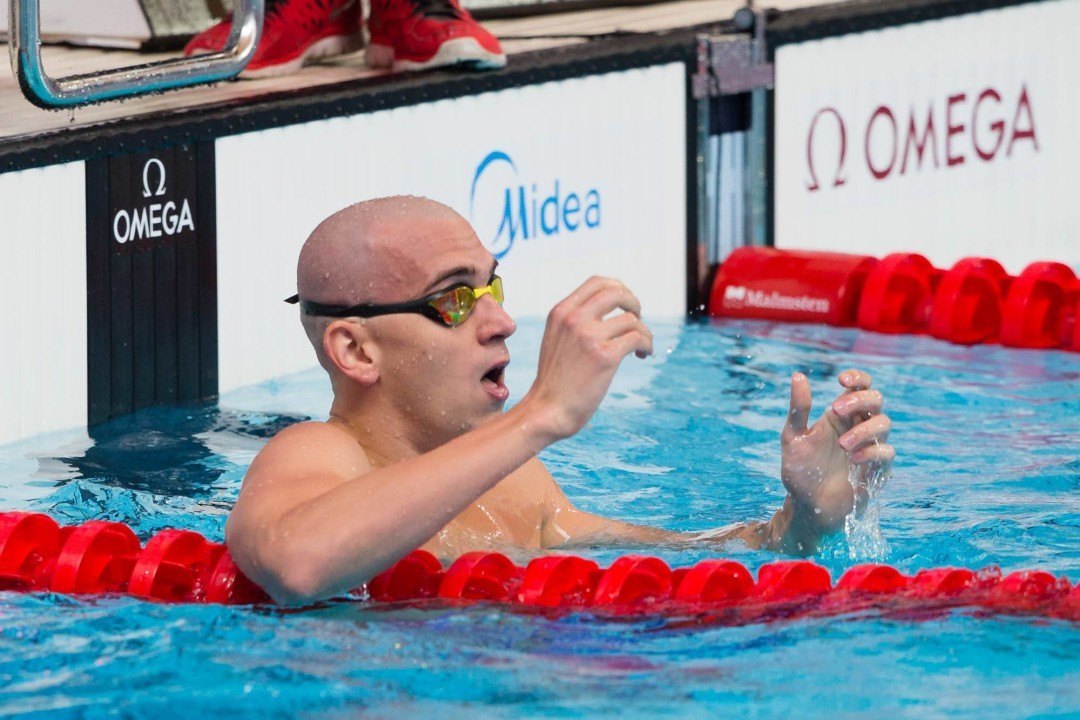 On day 4 of the 2017 Hungarian National Championships, junior standout Kristof Milak pulled off the upset over international veteran Laszlo Cseh in the 100 fly. Archive photo via Tim Binning/TheSwimPictures.com

On day 4 of the 2017 Hungarian National Championships, junior standout Kristof Milak pulled off the upset over international veteran Laszlo Cseh in the 100 fly. Milak, a European Junior champion, roared to a 51.98 in the final to take gold ahead of Cseh’s 52.36. That knocked nearly a full second off his previous lifetime best 52.84 and makes him the 8th fastest 100 butterflier in the world this year.

Olympic medalist Boglarka Kapas picked up the 800 free title on her birthday. Her margin of victory was greater than 6 full second, as her 8:24.76 put her well ahead of fellow distance standout Ajna Kesely (8:31.05). Kapas’ winning time was a season best, which moved her up in the world rankings from 10th to 5th. Kesely is now ranked 18th in the world, just 2 places behind Hosszu, who boasts a seaon best time of 8:30.93 from the Flanders Speedo Cup.

“I am satisfied with today’s swim. I think I can be satisfied with that time. These fantastic bouquets of flowers which I had received for my birthday on the podium are impressive.” –Boglarka Kapas

She has been 1.5s faster

Thank you. That event is really becoming the less predictable one.

Between who? The 2 japanes guys + ?
I don’t see Balandin coming out of nowhere again, so that basically leaves us with 1 or 2 american guys + MAYBE Chupkov.

So at least 5 guys according to you. But it’s not so simple. Everybody who will be in the final could win it.

Sorry, but you obviously didn’t understand my comment, i said the exacte opposite. At most 5 guys will fight for the medals, but it is more likely that it will be between the two japanese guys and one of the american guys. Anyway … i’d suggest that we wait for the german (Koch) and american trials before we make final predictions.

How so? Sjöstrom is guaranteed gold, the other medals should be between Oleksiak, Ikee and maybe one of the american/chinese girls. In my opinion the most unpredictable events at the moment are (not in any certain order): Women’s 200 fly Women’s 100 breast (hopefully Efimova won’t sweep the 100/200 breast) Women’s 200 back Women’s 100 free Men’s 100 free Men’s 200 fly For me the most unpredictable events at this moment would have to be women’s 200 back and men’s 200 fly. I think in men’s 50 free it will be between Proud, Manaudou, maybe McEvoy/Morozov/Sedov and 1 or 2 american guys, so you might also call this event pretty open. Men’s 200 breast should be between the two japanese… Read more »

U can name the Us guys in the 50 free : Its between Adrian , Dressel and Ervin .

So what is your point? I said 1 or 2 american guys and at the moment no one knows which american guys will be selected and who good of a form they will have in about 4 months. Of course it would have made no sense to name all 3, because only 2 can be selected …

50ms and100ms are always unpredictable, except SS and AP. Hosszu will win the IM’s (200m with WR) that’s for sure. The W100m back is another question for Hosszu because of the schedule. Otherwise at least 4-5 girls can win the 100 back. I think Hosszu will win the 200 back and Kenderesi(or Cseh) the 200 fly.

You should have named yourself “HungarianFanboyNr1”, because that’s what you apparently are. So from the fact that Hosszu is much slower than she has been at the same time the last couple of years you just conclude that she will swim a new world record? Hosszu is the favorite to win the 200 IM, but she has to be close to her form from last year, otherwise SMOC might very well beat her. In the 100 back it’s not really up to her anymore whether she wins the gold or not, if Masse swims at her best, then Hosszu can’t really do much. Hosszu might very well win the 200 back, considering that 2:06 high might be enough to do… Read more »

I never name myself Nr1, but as a Hungarian I can be a fan of the Magyars. SMOC at the moment isn’t inside the British team, she was disqualified at the trials. Hosszu will be on her peak in Budapest, on the first day nobody can beat her in 200IM. This year’s “form” dosn’t matter there’s only one important race, the Worlds.

51.89 is a big time swim for a 17year old. You got to figure Milak is going to get a lot faster. What other events is he swimming at Nationals?