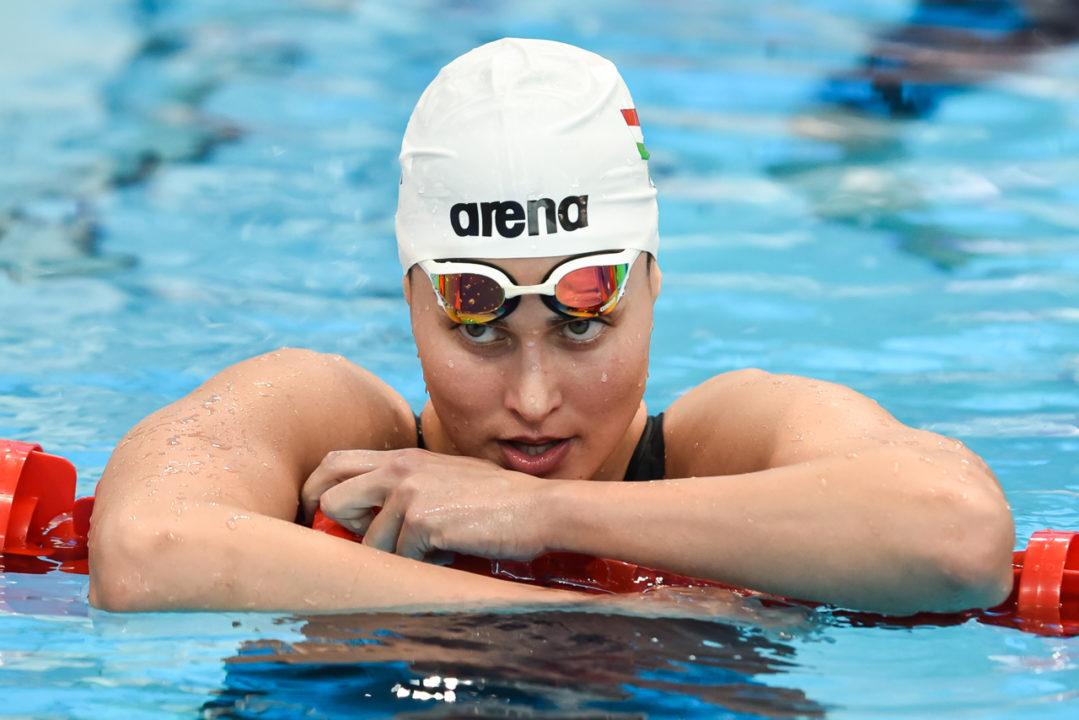 Zsu Jakabos won the women's 200 fly, but hasn't booked a spot on the team for the World Championships. Most of the winners were very unhappy with their results on the first day of the 2017 Hungarian Championships. Current photo via Zsu Jakabos

Daniel Gyurta, who took off 3 months after Rio and changed coaches, says that the “last 50 (of the 200 breaststroke) did not turn out the way we had planned.” He still had enough to win the men’s 200 breaststroke, rather easily, in 2:09.72.

His brother Gergely Gyurta is a few weeks back from hospitalization with a serious viral infection, and says that he didn’t get his strength back yet. He had enough, though, to win the men’s 800 free in 7:55.85, which is just 4 seconds from his lifetime best.

Kenderesi Tamas, winner of the 200 fly in 1:54.89, echoed Gergely’s complaints about a virus sapping his strength. That time moves him to 3rd in the World Rankings this season.

The country’s top maleveteran Laszlo Cseh, who took silver in Rio in the 100 fly, placed just 4th in that 200 fly in 1:56.82. Cseh, admitting that he didn’t return to training until January, said that while he knows his spot in Budapest is assured, he was not happy with his swim – saying he has the stamina, but his technique is not where he wants it to be, and that he needs to “get a feel of the rhythm” again.

Zsu Jakabos, who won the women’s 200 fly in 2:08.06, said her evening swim felt “effortless,” but that she expected a better time. That result won the day, but because it didn’t make the federation-mandated “A” time, Katinka Hosszu (who was 8th in the final in 2:15.77) and Olympian Liliana Szilagyi will be entitled to the spots in Budapest. Jakabos would get a swim in this race if Hosszu chose to scratch in favor of other events.

After a historic Olympic Games, the country’s top athletes sound frustrated with themselves and their results in the first day, while the administration remains upbeat in anticipation of hosting the 2017 World Championships. The country has 3 months to figure out that dichotomy, or else the gamble of accepting hosting duties for this year, instead of the originally-intended 2019 championships, could wind up back-firing to capture the domestic momentum.

Katinka Hosszu swam every race of the session, but didn’t win any of them.

I hate to be the one who say accusation about kantika but I never believe she’s clean. The amount of events and competitions she swam the past 4 years were unreal (even for athletes from other sports) and more shocking were the high level results she produces every meet. I noticed the physical change she had after leaving college and started training with her husband. Everybody said Ye Shiwen were on drugs after her London prefomance but they forgot she swam 4.30 in 2010 and she was 16, Kantika improved that record by 2 seconds and she was 27!!!. When Michelle Smith won 3 golds and bronze in 1996 also at the age of 27 people accused her for doping… Read more »

Some girls are unfortunate that their body shape change dramatically post-puberty, affecting power to weight ratio, buoyancy and streamlining, resulting in slower times. Katie Hoff was never again anywhere near her textile IM PBs from 2007 when she was 17 (even her rubbersuit swims in 2008-2009 were not much faster).
Some girls are lucky that their body shape does not change that much, Ledecky for example. Or sprinters… Read more »

So what exactly is the difference between her and someone like Phelps (prime Phelps around 2008) … ? Apart from the fact that Phelps dominated for a longer period of time and in more events? What is the difference between Hosszu (who dominates 2 events, maybe 3, but i wouldnt say that she dominates either 100 back or 200 back) and Ledecky, who dominated 3-4 events (400/800/1500 free + 200 free)?

Here we go again. The good old double standards…Dopers usually show up from nowhere, win a world title then an Olympic one, and disappear. Hosszu was already a world champion in 2009 (in the hardest event). Also, she never cuts her hair short, where from the super drugs could be traced back to years. You neither need to be a cardiologist to see that a human heart cannot be artificially overloaded so massively over those many years w/o any break. Like it or not, she is simply a maniac who will save Hungary again.
Comparing to Ye Shiwen? Seriously? Hosszu is still 3 sec shy of that last leg.

Hosszu will rescue Hungary from embarrassment. By the time Hosszu retires, she may win more individual Olympics and LCM world championships medals than any other female swimmers not named Ledecky. She already has the record for individual SCM worlds medals. This woman is truly a pioneer in taking professional swimming to another level.

It is difficult to argue with your “level” statement because you forgot to indicate what kind of level you meant: up, down or somewhere in different dimension. 🙂

Sure Michael Phelps get a LOT more money, but probably 99% of those come from endorsements and any other non-competition sources. Same with van Almsick who was the richest swimmer by far who received millions from endorsements, or Lochte, or Coughlin, or Franklin now.

Stars in other sports get a lot of money just by playing and competing, why can’t swimmers do the… Read more »

Dear NYJOHN, you like, admire (whatever) Katinka Hosszu to the level ( 🙂 ) that no argument can possibly change your opinion. That makes you a real Fan. The Fan with capital “F”. But I look at many things that she does at different angle.
I’ll put aside the discussion of the magnitude and timing of her results in the pool. It is a slippery road of unsupported accusations and “bulletproof” arguments on both sides. But her professional model is pretty much questionable in my opinion.
“Pecunia non olet” that is the real name of her brand.
Katinka Hosszu has some influence on swimmers’ mentality, but I would say that is questionable if she influenced the professional… Read more »

I have no idea what you are talking about, but if the topic is: “Is Katinka Hosszu an awesome swimmer?” then the answer is just “yes”.

Is Hosszu out of shape? Her times were not up to her usual standard. How many events she is trying to swim? It seems this could backfire her and she might end up not making any event.

She is training. The federation reserve various spot for its best athletes despite the times.
BTW I don’t think they have the two athletes limit in the heats. I remember last year european championship with 3 GB 200m breastroker.

At the euroean championship any country can list up to 4 swimmer in the heats of every event, but only 2 can qualify for semi’s and finals. At world’s and olympics each country can list only 2 and if both of them met the A qualifying standarts.

It is probably a different approach to training has been undertaken by Hosszu this year.
Hasn’t she trained during Olympic year? But her times in April last year was much stronger at EVERYTHING she swam compare to what we see now.
This may suggest that what we are up to see in Budapest will be completely different to what has been shown in Rio. The question is which way different.

On the surface, she seems like taking different approach this year.
However, she’s still swimming as many events as possible in one meet. While the results are starkly different.

Is it from different training approach, or is it because her body is no longer able to perform those crazy swims, quantity and quality wise, as she has done in the past.

She just found the next gear. Yesterday she started the day with moving a big amount of heavy weight, then swam in all events starting with an 1500 free. Today she collected a gold in 200IM with a world best time this year. Depends on the amount of weights she’s moving before her races.

There was European Championship before OG, and it is/was always important for Hungary. This year there’s nothing. Cseh, Kenderesi, Verraszto, Hosszu, Kapas… etc. They are protected because the times from 01.03.2016 are good for qualifying.

This year in Hungary the best 2 times qualifies from 1 March 2006 till and of this LC championship (if the 2 best times are level A).
Non filled spots (lack of an A level time) are still open for a race till the end of the official qualification period (qualification always based on times in Hungary, never places in a given race).
That’s why some swimmers with a ‘sure’ time from last year came for the championship from training. (Examples Hosszú, Kapás, Cseh)

Don’t buy that sleeping pill. In Budapest we have a good chance to see three ladies each grabbing four individual golds. Hosszu just needs to do a bit more maths on her adverse schedule.

Sorry to say, but Rio was rather catastrophic than historic for Hungary. Hosszu alone saved it for the country.
Kenderesi being sick again is neither the best omen to have it different this year.
That “new” federation is a joke, and they call this Nationals a tribute to Tamas Szechy…

How exactly was it catastrophic?

The realistic expectations were:
Hosszu to double in IM + silver in 200 back
Cseh gold in 200 fly and a solo silver in 100
Gyurta gold in 200 breast
Kapas silver in 800 free
David Verraszto bronze in 400 IM
That would have made #2 by 4-3-1
Posotive surprise: no one expected that fantastic 3 runs from Kenderesi with a dodgy leg

4
-4
Reply
Whatever
Reply to  Emanuele

Yes. What a wild guess it would have been to predict that the defending champion would win?! Just crazy!!!

4
-5
Reply
ThomasLurzFan
Reply to  Whatever

I think you have to… Read more »

6
-2
Reply
Whatever
Reply to  Riez

Thats not the swimmers problem or that of your federation, your expectations were just completely ridiculous.
Double gold for Hosszu: Yes, had to be expected
Silver in 200 back: Yes, not unrealistic
Gold for Cseh in the 200 fly: Why? What about Phelps and Le Clos?
Silver for Cseh in the 100 fly: Yes, but what difference does it make whether he wins it alone or not?
Gold for Gyurta in the 200 breast: Daniel Gyurta? Didnt you follow swimming in 2016? Even him making the final would have been a surprise.
Silver for Kapas in the 800 free: Not unrealistic, but what about Van Rouwendaal, Carlin, Friis, Ashwood and Boyle? Why exactly did… Read more »

Please look around before you write about the new generation. Your comment is a joke.