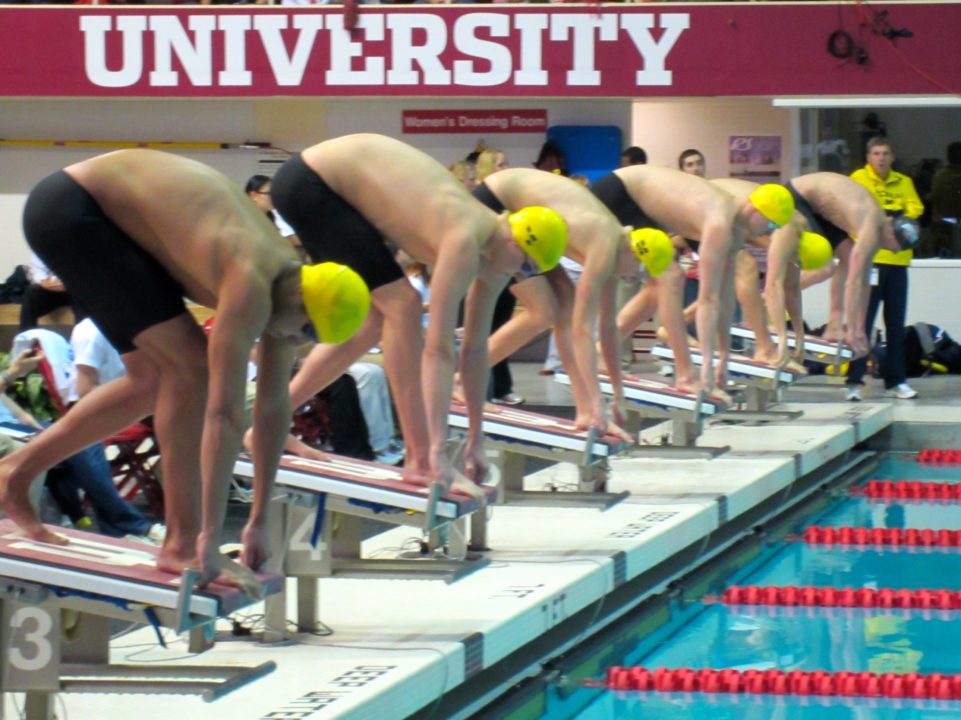 Michigan took 5 of the 6 spots in the men's individual 200 freestyle on Friday evening. The pictures says it all (Photo Courtesy: Natalie Schumann)

Surprise superstar Michael Weiss of Wisconsin defeated last year’s champion Kyle Whitaker by over a second, finishing nearly four seconds faster than his prelim time with a stunning 3:39.17. The time would have placed second at the 2012 NCAA meet. Whitaker clocked in at 3:40.94, just ahead of teammate Dylan Bosch (3:42.17). Whitaker placed second at NCAA’s last year with just a 3:41.37, showing how high the stakes have been raised in this year’s competition.

1-2-3-4. As expected, Michigan’s endless powerhouse of 200 freestylers dominated the final heat, claiming the top four spots as well as sixth. Mid-season pickup Anders Nielsen set new B1G, meet and pool records with his time of 1:33.20, which would have placed third at last year’s NCAA’s. Nielsen came in mid-year for the Wolverines, but has come up to speed very quickly. He initially broke this Meet Record leading off the 800 free relay, then Michael Wynalda took it back in prelims, and now Nielsen owns it again. It’s all in the Michigan family, though. The old Pool Record belonged to the great Dan Ketchum.

Indiana’s Cody Miller became a three-time B1G champion tonight in the 100 breaststroke with his win in this race, breaking the B1G, meet and pool records. His time of 51.50 would have made him the 2012 NCAA champion in the event. He out-touched Michigan’s Richard Funk (51.91) to continue his winning streak, and Michigan’s sprinter Bruno Ortiz showed his versatility with a third place finish (52.42).

Indiana’s second defending B1G champion of the night did not disappoint. James Wells secured another title with his 46.04, which was half a second slower than his prelim time. Penn State’s Sean Grier (46.12) was second, followed by Indiana’s Eric Ress (46.14). All three times were faster than Wells’ 2012 B1G championship time of 46.30.

Ress may have been the favorite coming in, but Wells had the confidence of being the defending champion from last season when Ress was hurt. Now, Wells proved he belongs among the best in the country, with or without a Ress injury.

The final day of competition includes the 200 backstroke, 100 freestyle, 200 breaststroke, 200 butterfly, 400 freestyle relay, 1650 freestyle, and platform diving. In other words, tomorrow holds many opportunities for Michigan to increase their lead, but also plenty of spots where other teams can close the gap. Despite the Wolverines’ success, Indiana has kept things relatively close (140 points) with unparalleled diving performances.

Braden, do you know why PSUs top freshman, Shane Ryan, is not swimming at big tens?

Does anyone know what happened to PSU stud freshman Shane Ryan? Why isnt he swimming for PSU?