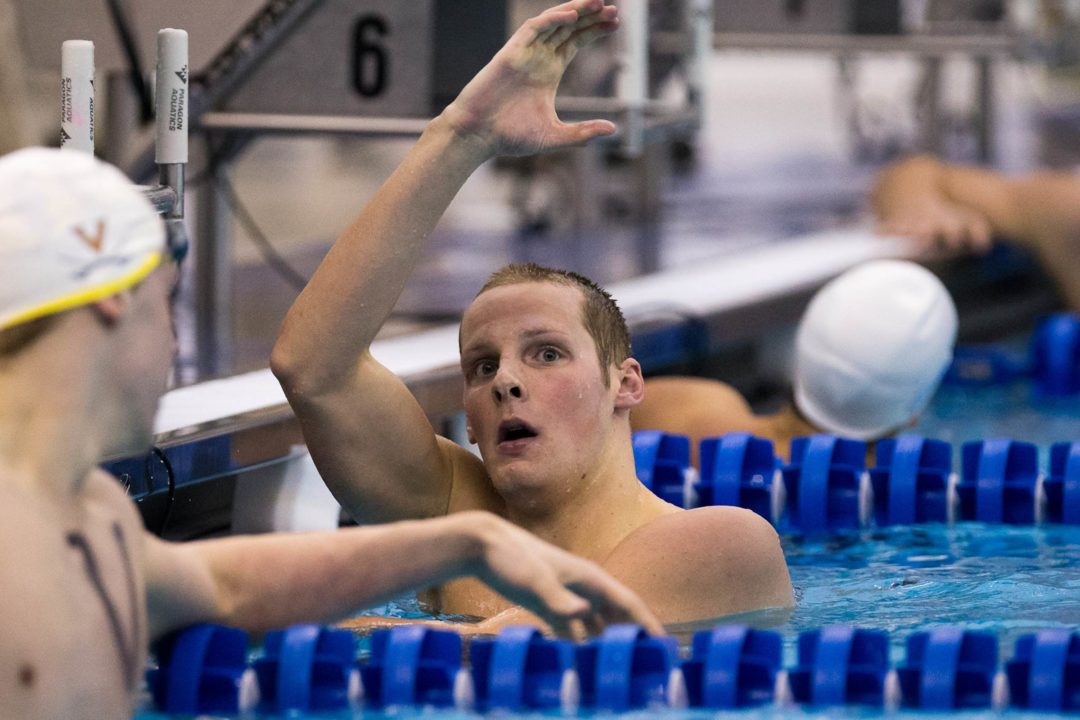 The Virginia men continued to stretch their lead on the third day of the four day ACC Championships. Even accounting for the diving results from the platform, which don’t technically join the score until Saturday, the Cavaliers have a 100 point lead over Virginia Tech. They have a solid Saturday lineup ready to go, so don’t expect them to give this lead up.

The ACC, who chooses to go relays-first, got off to an exciting start as two teams went under the old league record in this race with matching 3:07’s.

Zach Mcginnis got the Hokies out to a lead with a very fast 46.2 backstroke split. There were some issues with the timing system in terms of picking up splits in this race, but you can still make out the 300 and 400 splits, which show that North Carolina State anchor Jonathan Boffa split 41.6 at the end for the Wolf Pack. That’s a fantastic split; but Bonks 42-high was enough to hold him off.

North Carolina’s Tom Luchsinger was challenged big in the prelims of the 400 IM, but he came up spades in the final to capture his second-straight title in this race in a 3:44.25. He won this race by going out very hard in the butterfly (splitting 49.43) and not letting anybody get much closer than two seconds throughout the race.

That winning time was over two seconds faster than he was to win last year’s title.

Meanwhile, Virginia’s David Ingraham and Brad Phillips both added from the prelims, but still went 2nd and 3rd in 3:46.68 and 3:48.25, respectively. Ingraham went out much faster than he did this morning, perhaps being forced by Luchsinger’s heavy early pace,  and it seemed to cost him later in the race. Phillips, a freestyler, came home very fast to overcome North Carolina’s Alex Gianino (3:49.34), but ran out of room on the top two.

North Carolina State’s Barrett Miesfeld was up against defending ACC Champion Greg Mahon in a tiny deficit headed into the final 25 yards of this 100 fly. That’s not an enviable position for anybody, but Miesfeld handled it like the veteran he’s become, and overtook Mahon for the victory in 46.20. Mahon touched 2nd, just a few fingernails behind, in 46.22.

Georgia Tech had one of their best performances in this meet, with Eric Chiu touching in 3rd place in 47.03 (exactly matching his prelims time) and Nico van Duijn was 4th in 47.07. Florida State’s Connor Knight was 4th in 47.13, and Virginia Tech’s Nick Tremols was 6th in 47.22.

North Carolina freshman Sam Lewis put up an impressive 46.42 in the B-Final for the victory. That would’ve put him third overall had he been a few tenths faster this morning. That is actually the fastest time by a freshman in the country this season, jumping ahead of Auburn’s Arthur Mendes.

The Virginia men weeren’t as dominant in this 200 free as they’re used to (for example, last year they went 1-2-3), but they still tagged on a 6th-straight victory in this event, thanks to a 1:34.03 from senior Tom Barrett. North Carolina State’s Simonas Bilis was 2nd in 1:35.56, just out-touching another freshman, Nick Alexiou from Virginia, in 1:35.57.

It looked like Virginia’s Taylor Grey might take this win, but a burst of speed off of the final turn took Bishop to the win. Grey was 2nd in 53.67, with Duke’s Hunter Knight finishing 3rd in 53.72.

FLorida State’s Alex Rodriguez was able to drop another few tenths off of his prelims time with a 53.82 for 4th. Duke was the first team to get two A-finalists when Jim Zuponeck was 5th in 53.88.

Florida State’s Pavel Sankovich joins a large rank of collegiate swimmers this year who are having big, national impacts despite only beginning their yards training mid-season. That includes swimmers like Anders Nielsen at Michigan, the 200 free conference champion, and Arthur Mendes at Auburn.

Sankovich took his second individual ACC title of the meet with a 45.86 in the 100 back: a new ACC and ACC Championship record. The old mark belonged to UNC’s Tommy Wyher in 45.93 from NCAA’s in 2010. Sankovich’s time is now fourth in the country (accounting for times swum at Big Tens tonight).

Virginia Tech’s Zach McGinnis also goes into the top 8 in the country with a 46.25 for 2nd place here. Virginia’s Jack Murfee finished 3rd in 46.69. That’s almost a second faster than his previous best coming into the meet, and a new Virginia school record.

Team Standings After Friday (Day 3) Plus All Diving