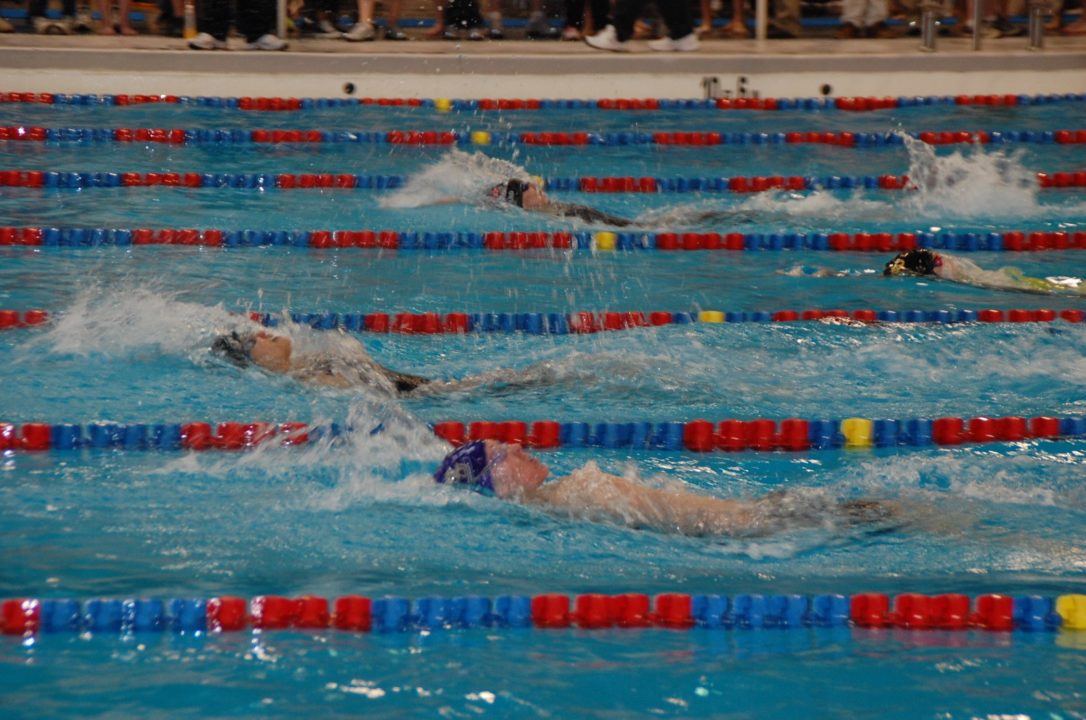 Anne Lepesant is taking the lead on the NAIA National Championships this weekend in Oklahoma City, Oklahoma.

SCAD’s Heather Partlow, Fanny Varga, Kelsey Bobzien and Haley Thompson came from behind to finish second in 1:36.62, just ahead of Olivet Nazarene’s Kelsey Weener, Melissa Wright, Mary Wilson, and Katelyn Jo Snyder, whose 1:36.97 was a full 4 seconds under their school’s previous record.

Not to be outdone, OBU’s men followed up with a meet record of their own. Daniel Ramirez (20.18), Nick Schuttinger (19.70), Garland Sullivan (19.91) and Logan Lassley (19.71) hit the wall in 1:19.50, lowering by .06 their own record set at this meet last year. SCAD’s Sean Sloat, Mark Shvartsman, Zach Redpath and Pat Cardillo had a dramatic finish, coming from behind to touch second with a school record of 1:22.22. Concordia rounded out the top three with a 1:22.38 swim from Parker Simmons, Kevin Donnelly, Michael Craft and Lucas Spencer.

Top seed Hannah Legg of SCAD Savannah took it out strong and led from start to finish. Her 4:25.13 lowered her own school record and gave the Bees their first national champion of the meet. OBU’s Nicole Wilson came in second at 4:26.72 and Brenau’s Hannah Boudreaux was third with 4:29.09.

Connor Wilson of OBU dominated the men’s race, finishing first in 3:57.90. The excitement played out between Olivet Nazarene’s Aaron Buchanan and OBU’s Gilles Cantrelle who battled for second. Buchanan led by 3 seconds after the backstroke, and by 2 after the breaststroke, but Cantrelle closed the gap and nearly caught him. In the end it was Buchanan taking second in 3:59.03 and Cantrelle third in 3:59.08.

Defending NAIA champ Christina Tixier cruised to an easy win, narrowly missing her own meet record with a 54.75 finish. OBU’s Lisa MacManus came in second in 56.56, just ahead of Charlotte Parent of Cumberlands who went 56.71.

OBU dominated the men’s 100 fly with a 1-2-3 finish. Nick Schuttinger broke his own meet record of 47.46, set at last year’s meet, with a 47.30. Teammates Garland Sullivan and Maximilian Abreu were neck and neck the entire race, with Sullivan (48.46) just touching out Abreu (48.48) for second place.

Laura Galarza of OBU nearly broke the meet record with her 1:49.95 win. Her teammate Yulia Lapshova had a strong race, keeping pace with Galarza until the last 75 yards. She finished second in 1:52.63, while Samantha Elam of Olivet Nazarene was third in 1:53.15.

The men’s race featured an exciting come-from-behind swim by Olivet Nazarene’s Andrew Fischer. He overtook OBU’s Javier Sossa on the last 50 to take the gold in 1:39.35. That swim smashed his own school record by 3.5 seconds. Sossa’s 1:39.76 was the second-fastest swim. Yoni Pruzinski of Illinois Institute of Technology took third in 1:40.26, setting a new school record in the process.

Kerryn Mullin of OBU ran away with the 100 breast. Her 1:02.93 finish was nearly 2 seconds ahead of Melissa Peplinski of Cumberlands. And Peplinski’s 1:04.53 was 2 seconds faster than Sydney Harris of Olivet Nazarene, whose third-place time of 1:06.44 lowered her own school record by 1 second.

Lisa MacManus of OBU dominated the field in the women’s 100 back, touching first in 54.67. Kelsey Bobzien of SCAD Savannah was second in 56.81. Ines Remersaro of OBU took the bronze in 57.09.

Not content with the meet record he had set during the morning session OBU’s Daniel Ramirez came out blazing in the 100 back. He dropped another second and set the new NAIA bar at 47.61. It was a spectacular swim and the only one under 50. Daniel Robbins of OBU narrowly beat Zach Johnson of Cumberlands, 50.47 to 50.58, for second place. Johnson’s swim earned him the school record.

Oklahoma Baptist picked up a packet of points as all four divers in the event were Lady Bison. Kristen Brimage, who also won the 1M, was the first-place finisher with 252.30 points.

The Oklahoma Baptist women won their fourth relay of the meet with the 400 Medley. Ines Remersaro (57.61) and Kerryn Mullin (1:02.92) had the strongest legs in the field, while Laura Galarza (55.43) and Emma Forbes-Milne (51.74) were able to maintain the Bisons’ lead over the competition to cruise to a first place finish with 3:47.70. Meanwhile the fight for second and third was an exciting one between Cumberlands, SCAD and Biola, changing hands several times. At the end, and despite a 51.60 free fourth leg from SCAD’s Haley Thompson, Cumberlands prevailed. Their relay of Lizzy Horn, Melissa Peplinski, Charlotte Parent and Kaleigh Botill held onto their lead and finished second in 3:55.23. SCAD’s Kelsey Bobzien, Heather Partlow and Hannah Legg and Haley Thompson took third in 3:55.44.