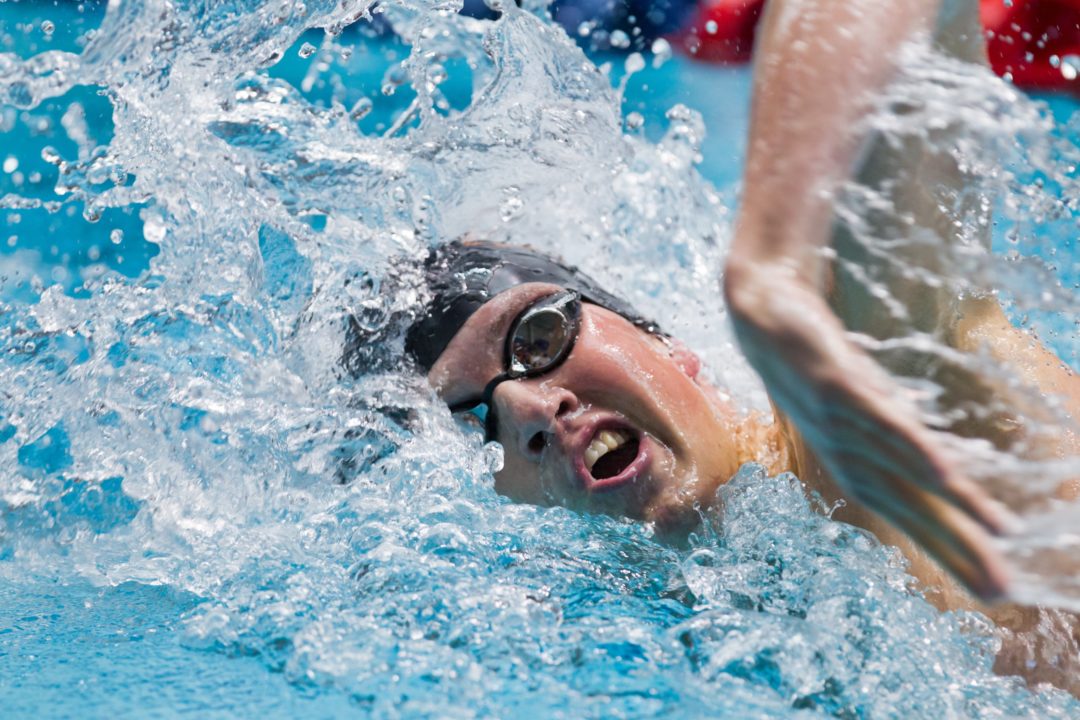 The Texas men and Texas women continued to dominate the scoring on day 3 of the 2012 Big 12 Championships, but the Longhorn women weren’t without challenge on this day.

Texas got off to a good start, with sophomore Kaitlin Pawlowicz taking a huge victory in the 400 IM with a 4:11.80. Kansas freshman Chelsie Miller was 2nd in 4:15.01, and Victory Cassidy, also from Texas, was 3rd in 4:15.04. TCU’s Ali Bleasdell had her team’s best swim of the evening, cutting another three seconds off of her best time to place 4th in 4:18.21.

In the next event, though, the West Virginia Mountaineers showed that they still had plenty of fight left, despite a lop-sided score. Texas senior Kelsey Amundsen took the win in 52.57, but West Virginia’s Mandie Nugent almost ran her down at the final wall with a 52.67 for 2nd. That’s a new West Virginia Record, and more than a second faster than she was in prelims. Texas’ Gretchen Jaques was 3rd in 52.79, a very good start to a challenging double.

In the next event, West Virginia did one spot better. Senior Rachael Burnett is having the meet of her life, and this time swam a 1:45.22 to win the 200 free. That’s the second time she’s broken that school record in this meet, and gives her a second event victory to go with her earlier win in the 500. What’s really scary about how good Burnett has been is that she’s not shaved nor fully tapered for this meet.

Texas got back in the win column in the 100 breast, as Laura Sogar swam a 58.67  for her second career Big 12 title in the event. She was the third women’s breaststroker this evening under 59 seconds, which shows just how crazy this race could be at NCAA’s. Jaques finished that double with a 59.64; she got stronger every time she raced on Friday, and that time was a second faster than she was in prelims. Iowa State’s Imelda Wistey was 3rd in 1:01.35.

The aforementioned Denninghoff came back to her primary events, the backstrokes, later in the session, and the amounted to a win in the 100 in 52.10. Her teammate Lily Moldenhauer was 2nd in 52.62, with Jess Guro taking 3rd.

The Texas Longhorn women finished the session by going 1-2 in the 200 free relay; the A was a 1:29.14, and the B was a 1:31.19. That A-relay time exactly matches the Longhorns’ best mark from Winter Nationals in December.

Texas’ Austin Surhoff look as good this year in the 400 IM as he has since his explosive freshman season, even as his sprinting has become so elite this season. He got off to a huge head-start in this race, and even with his distance-oriented teammate Michael McBroom at his heels, cruised to a 3:45.11 victory. McBroom, closing in a 51-split for his 100 freestyle, was 2nd in 3:49.33, with their freshman teammate John Martens finishing 3rd in 3:49.85.

Nobody else was even close to Cooper in that race; his teammate Conor Swanson was 2nd in 48.56, and TCU freshman Corey Nix took 3rd in 48.85.

Texas sophomore Clay Youngquist, another member of an impressive Longhorn sophomore class, also went a best time on Friday. He swam a 1:33.71, which is just faster than his mid-year time from Winter Nationals; that included going out in 45.3. His freshman teammate Sam Lewis took 2nd in 1:36.39. West Viriginia freshman Ross Glegg took 3rd in 1:36.78, but the third-best time overall went to Texas’ Bobby Button in 1:36.66. Button is on Texas’ non-scoring squad for this meet, which is why he ended up in the B-final in the first place after a good prelims swim.

Texas’ Dax Hill, a former high school state champion in the breaststrokes, came back to his old event as a senior with a resounding 53.33 second victory. He related after the meet, via his Twitter account, that he and Reese had worked on the breaststroke earlier in his career, but eventually gave up on it, remarking that  it’s “funny how things work in the end.” He’s certainly got a very good chance of swimming this on their 400 medley relay, but it would be quite a twist if he swam this race on day 2 of NCAA’s instead of the 200 free where he’s the defending champion. Don’t count on it.

His teammate Charlie Moore, also largely a sprinter thus far in his career, was a solid 54.88 for 2nd, followed by West Virginia’s Christopher Brill in 55.02. Brill is among the swimmers contending for the 200 breaststroke title tomorrow with only one Texas “scoring squad” swimmer among the 13 entered. He’s the 2nd-seed, behind TCU’s Adshead.

Texas looks ever-strong in the backstrokes, with Kip Darmody making a third sophomore winner on the day in 46.77. Patrick Murphy (not the one related to Ryan) was 2nd in 46.99, with Cole Cragin touching 3rd in 47.10. TCU swimmers went 4th and 5th in 47.20 and 47.95, though Texas had another fast time from their non-scoring lineup as Aaron Gustafson was a 46.98 in the B-Final.

Good to see Clay Youngquist with a best time in the 200 free. It’s now time for him to show his talent at the NCAA championships but also this summer in long course. I always repeat he has won the junior pan pacs in 2010 in 1.48.44. 3 years later he should swim at least in 1.45. It could help the American 4X200 free relay in Barcelona. Even if I think the French will win this relay.