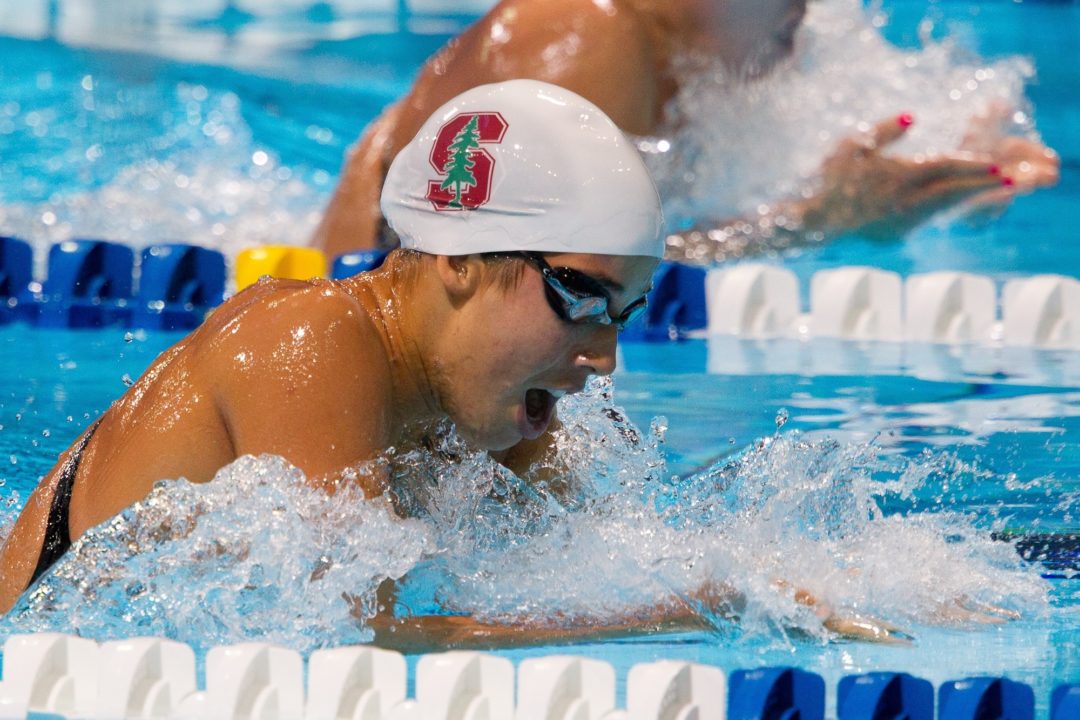 Stanford's Maya DiRado got a win over Caitlin Leverenz in the 400 IM, which helped Stanford to a very narrow lead over USC with just 7 finals to go. (File Photo Courtesy: Tim Binning/TheSwimPictures.com)

Amanda Smith, a former USC Trojan swimmer beginning her quest toward graduate school, is working our coverage of the Pac 12 Women’s Championship this week.

While the times may not be as fast as last week, the team race is definitely the highlight of the Women’s PAC-12 Swimming & Diving Championships.

Most swim fans will remember that legendary IM’er Katinka Hosszu decided to swim the 200 free versus the 400 IM at last years PAC-12s. Caitlin Leverenz shined and controlled the field, but this year was a different story. Almost the same race strategy of a very strong final 100 freestyle was used by Stanford’s Maya Dirado to take the title tonight by .01 over Leverenz.

And it’s hard to believe that she is just a freshman. USC’s Kendyl Stewart had a phenomenal swim tonight, breaking USC’s school record and taking the top spot tonight and also in the country with a time of 51.32. Her time tonight would have won the NCAA Championship last March. and the top two swimmers in the country this year (Louisville’s Kelsi Worrell is the other) are now both freshmen.

Yet another freshman, Cal’s Rachel Bootsma finished second to Stewart, also sub-52 in 51.78. Defending backstroke NCAA champion, Cindy Tran, finished third, 52.05. Megan Lafferty from Arizona was fourth, also under the A standard at 52.10.

Tight race from top to bottom, and great to see all eight A finalist swam faster tonight. This could shake up to be a highly anticipated race at the NCAA Championships in three weeks.

Utah started off a very good night with this 100 fly, where freshman Petra Soininen won the C-Final in 54.1. The Finnish swimmer has good international potential as well, swimming a 1:01.3 in the long course 100 fly in 2011.

Another freshman topped the field in the 200 freestyle, with Cal’s Rachael Acker besting Stanford’s senior Andi Murez by just about .1. Andi’s time from prelims would have won tonight, but she finished at 1:44.72 (1:44.42 prelims) to Acker’s 1:44.66. Cal also took the 3rd (Caroline Piehl), 7th (Camille Cheng) & 8th (Catherine Breed) place in the final.

Outside of the A final, senior from Arizona Monica Drake topped the B final in 1:46.45 (tie with USC’s Lynette Lim). She’s had a tough year, but it was great to see her able to fight her way up in this event.

With no A finalist, USC had to rely on great performance by Lim (tied for 9th) and senior Kate Shumway, 11th  in the B final, and Kasia Wilk, topping the C final for team points.

Kasey Carlson was a bit off her sub-59 swim this morning, but she still took top honors in the event tonight. This is her first PAC-12 individual title. Carlson had a bumpy year last season with battling illnesses, and she seemed poised to have a great NCAAs in a few weeks.

Like we said this morning, it was a three way battle from three different teams, and Arizona’s Ellyn Baumgardner improved her morning swim by a second to finish second in 59.52. Another great performance by a freshman was by Stanford’s Sarah Haase finishing third, 59.54. Those women were the only three under the minute mark tonight.

Big time drop by ASU’s junior Alex Popa, cutting over a second off her preliminary time to top the B final, 1:00.49.

Lots of women did the “dirty” 100 butterfly, 100 backstroke double tonight. Finishing second in the 100 butterfly maybe gave her some fire, and Rachel Bootsma beat out her teammate and the defending champion Cindy Tran.

Bootsma finished in 50.64, .01 under the PAC-12 meet record, and just .3 behind her teammates winning time from last year NCAAs. Tran doesn’t seem to have her signature speed right now, so we’ll see how she fairs in a few weeks with some rest. Both swimmers have been faster than their times here this season, and between those two and Liz Pelton, Cal holds the 8 best swims in the country this season.

While it seemed like a Bear vs. Cardinal heat, Arizona’s Lauren Smart was able to break it up finishing 6th. USC once again with no A finalist swimmers, led a 9-10-11-12 place sweep in the B final, including Stewart finishing 10th.

ASU claimed their first title of the meet with diver Morgan Weller. Duke transfer Haley Ishimatsu and sister to legendary PAC-12 diver Tory Ishimatsu, did very well and may be following in her sisters footsteps on the springboards finishing second over last night’s 3m runner-up Arizona’s Samantha Pickens. Utah Sophomore Kersten Merry led the highest place for the Utes thus far in the championships with a 4th place finish.

Stanford had 3 A finalists, 2 B finalists and 1 C finalist contribute to over 100 points alone in diving.

The 400 medley seemed that it may go more in the Bears’ favor, but Arizona topped the field with an impressive 46.49 anchor leg by Margo Geer.

Arizona, Cal and USC were all even after 300 yards, all around 2:42’s, but Margo really did ‘GO’ for her team, falling just a bit short of the meet and conference record. Besides Geer, the relay had teammates Lauren Smart, Ellyn Baumgardner (58.57 split) and Megan Lafferty (split a great 51.1 butterfly leg). Their time of 3:28.91 is already faster than their NCAA runner-up time from last year, and a new Arizona school record.

What a night. After the IM’s, USC took a small marginal lead over Stanford. The Trojans built it a bit after the 100 butterfly, but with impressive depth in the mid-distance freestyle Cal emerged back in the game up to second place, only ten points behind the Trojans. And that was only halfway through the session.

After the breaststroke, backstroke, diving, and relay, Stanford emerged back as the leaders. They hold a small margin on the Trojans of only 8 points. Cal rebounded well today, but it seems as if they have locked themselves into third place being 70 points back from Stanford.

Tomorrow is the final day, and the individual events in the morning will be the 200 backstroke, 100 freestyle, 200 breaststroke, 200 butterfly and the 1650 freestyle in the afternoon. Should be an exciting morning, locking up “big”, “little”, and “little little” swims.

Acker winning the 200 free is a shocker! She’s been coming on really fast the last couple of years, making WUG’s last summer and now a 1:44? She’s dropping time like she’s and 11-12 swimmer. Great for Cal’s future.

Which is why I was so confused by her 50 yesterday. After going 22-mids all season she went the same and lost her spot on their A relay. I was assuming she wasn’t rested.
Now today she goes 1:44 mid and 48.0 in the relay. Between her and Pelton, maybe they’re just having freshmen jitters.

Wow! 50.64 for Rachel Bootsma in the 100 back just after a 100 fly! Very impressive. If she didn’t have the other race before, I’m sure she could already break this season the legendary NCAA record of the legendary Natalie Coughlin. 49.97 is the target. Anyway, it will be broken this year or next year. But without the 100 fly it would be easier.
Another great battle for Caitlin Leverenz and another second place for her. She must be angry. But the big meet is in 3 weeks. Maya DiRado is always a great finisher in her IM races.
Weak 200 free. And what happened to Miss Pelton in the prelims? 1.47! Did she still sleep? She had… Read more »

If the psych sheet is accurate, platform diving could be the determining factor in the team race. 5 USC divers, 1 from Cal and none from Stanford. By my math Stanford has racked up 209 points in diving so far, 128 for USC and only 22 for Cal. If USC scores 5 divers in the platform vs none for Stanford, that may be enough to lock up the team title.

USC is going to really struggle in the 200 back, but should be strong in the 200 breast. Will be a very close meet tonight

Bobo- Pelton was confirmed sick with the stomach virus all of yesterday. Her 143.1 on the 8free relay should be a great indicator of what she’s capable of for when she fully rests for ncaas

Thank you for the news. What have they with the virus? Jasmine Tosky, now Elizabeth Pelton. But it’s better for them to have that now rather than in 3 weeks.

I’m curious about Cal’s performance as compared to last year (and the year before). Did they have more divers in past years? Or were they just able to overcome the enormous scoring disparity in the diving events?

Cal lost points by not having a b 400 yard relay. There b time couldn’t have been that bad. Both USC and Stanford scores points with the b team as well. Too bad Arizona doesn’t have more depth since they tend to win the medley relay.

Revised platform diving sheet. 6 each from USC and Stanford. 2 for Cal.

Should be a very close finish tonight between USC and Stanford. Looks like Stanford has the better chance of coming out on top due to stronger 200 back and possibly 1650 scoring. Offset somewhat by USC’s better showing in 200 breast.

strange move by USC….Meghan Hawthorne swimming 200 fly instead of 200 breast or 200 back. I cant recall Meghan swimming the 200 fly in a big meet before.