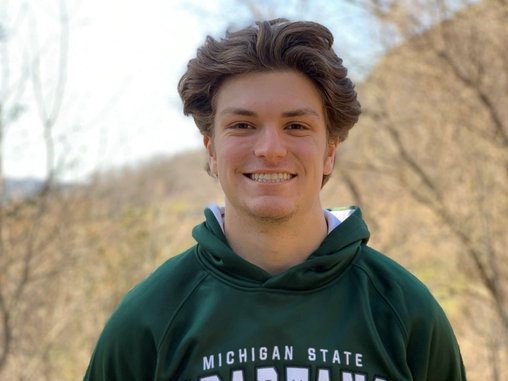 Grant Wolner from Winona, Minnesota announced his commitment to swim at Michigan State University beginning next fall. He told the Winona Daily News: “It was one of the hardest decisions I’ve ever made. The opportunity to swim at a Big Ten school, it’s really humbling. Definitely a dream come true. … Definitely a big weight off my shoulders.”

A USA Swimming Scholastic All-American from Winona Senior High School, Wolner is the Minnesota Class A champion in the 100 fly, having won in 49.28 at the 2020 MSHSL Boys A Swim & Dive Championships in February. He broke the MN Class A record with his swim, taking .07 off an 8-year-old mark. Wolner also etched his name in the Class A state record books, along with his Winhawks teammates, in the 200 free relay (he split 20.65) and 400 free relay (he split 46.32) and took home a bronze medal in the 200 IM (1:50.81).

Wolner’s brother Griffin Wolner is a rising junior at South Dakota. His club and high school teammate (and fellow relay record-breaker) Jack Herczeg is off to swim for the Buckeyes next year.

Pumped to be a Spartan in the fall!! #gogreen #msuswimanddive pic.twitter.com/bKdwGFlz7a

Always forget Michigan State has a team. They are in desperate need of a coaching regime change.

I think before you can even talk about coaching, you need support from the school. How can they be expected to be competitive when they are still in a 70 year old, 6 lane pool

Mate, Notre Dame does fine in a similar set-up. The coaching staff at bottom tier big10 teams (aside from NU) have largely remained the same, and produce sub-par championship results. Heck, look how far MN has fallen since Dennis left. Iowa, Mich St…. same old story every year. At some point it does become an issue with the coaching staff.

Exactly; I wouldn’t expect them to challenge Michigan/Ohio State/Indiana; probably not even Penn State. But they’re below even a perennial underachiever like Iowa, and generally don’t really look like a power five school. What’s their funding situation? Iowa, LSU, South Carolina, Pitt—all these teams look at least passable in dual meets, and have occasional flashes of brilliance. It’s not like Michigan and the upper Midwest isn’t a decent recruiting ground. You’d expect them to have more than one swimmer per event going D1 caliber times.

Agree. they have a great history dating to the 1950s and 60s with world record holders, Olympians, NCAA champions, etc. Last time i was there the trophy cases looked like they hadn’t been dusted since then. Inch of dust, dead insects in them, paper torn from the duration they were in there. And these were directly across from the coaches office.