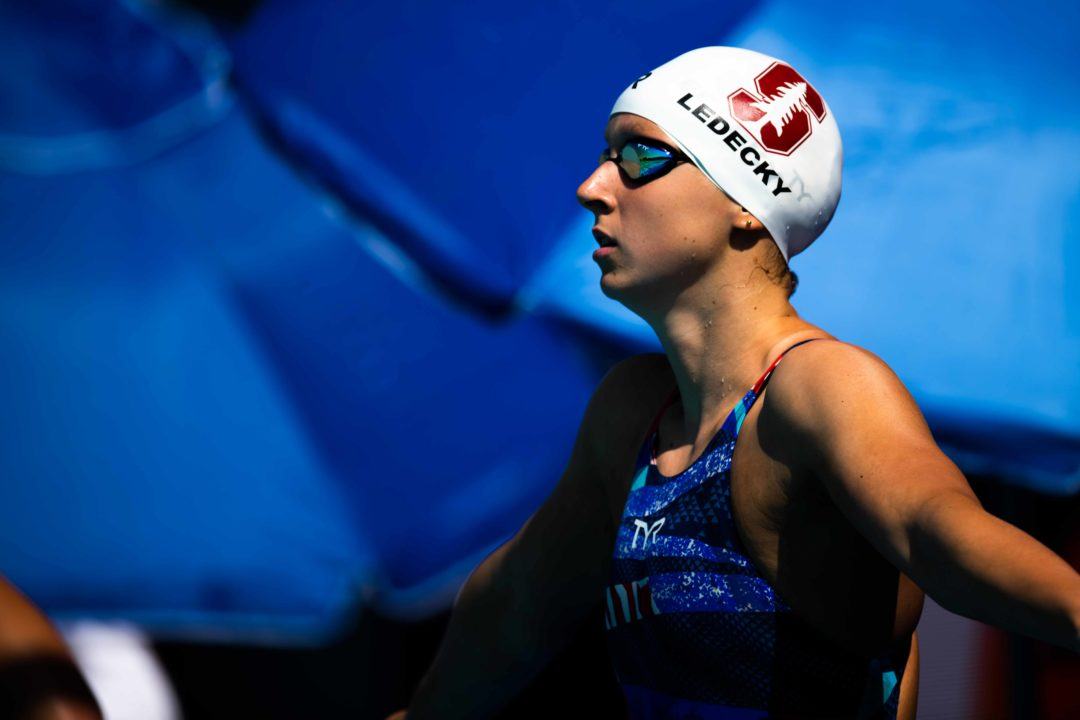 The ‘shall we taper, shall we not’ has thrown a little bit of havoc (read: excitement) into the battle for 2018 TYR Pro Swim Series title. While the formal series itself is over, results from Nationals, where everyone has higher goals of ‘making the team for Pan Pacs,’ will count for double points toward an eventual prize of $10,000 in cash and a 1-year lease on a BMW.

Focusing on the top 5 coming into the meet, here are the standings after day 1 of Nationals:

Note: Because of the double points, it’s possible that someone else sneaks into the top 5, but USA Swimming only publishes points for 5, so we don’t know who’s 6th right now. Nobody new will contend for the title, though.

Day 2 of the 2018 US National Championships ultimately wound up being rather uneventful as far as the PSS standings go. Chase Kalisz was a no-show in the 200 breaststroke, and Zane Grothe was 18th in the 200 free before scratching the final, which means that neither of the contenders in the men’s battle moved – though Ryan Murphy‘s win in the 200 back jumped him to 3rd (he’s only got 1 Olympic race left, the 100 back, so no danger of him taking the title).

Kalisz will have the 400 IM, in which he’s heavily-favored as the defending World Champion, on Friday, while Grothe has an off day. If Kalisz wins that race (and remember – he’s not yet on the team, while Grothe is a ‘maybe’ based on his 3rd-place finish in the 1500), then he’ll have a commanding 15-point lead, and Grothe will need to find a win in either the 400 or 800 free, at least, to have a chance.

The women’s race had only one swimmer in the top 5 score points: Katie Ledecky, when she won the 200 free for 10 points. That puts her 13 clear of Leah Smith. While Smith still has 3 event entries left (400 free, 1500 free, 400 IM) and Ledecky just 2 (400 free, 1500 free), if Ledecky chooses to swim both of her remaining races, and wins them as she’ll be heavily-favored to do, then Smith won’t be able to catch her. Margalis, for now, is pretty well out of contention, unless Ledecky and Smith both go on big scratch runs (they’re both on the Pan Pacs team, and neither has anything concrete left to gain from this meet).

Only Smith can pick up points on Friday, in the 400 IM where she’s the top seed, so she may finish the day with the lead.

“men dont move” sounds kinda weird doesnt it? i mean i get what it means but still..

I, for one, am a very rambunctious dancer.

Why was Ledecky awarded 20 points but not 10 for the win in 200 free. If it was 10 then the arithmetic will be different. Though it is true that after Leah missed podium yesterday it is all up to Ledecky now if she wants this BMW and $10,000. Could it be that TYR wants her to win?

it’s in the article… nationals have double the points

As per article above its double points for nationals

Considering Leah is also sponsored by TYR, I doubt they are rigging it in favor of Ledecky.