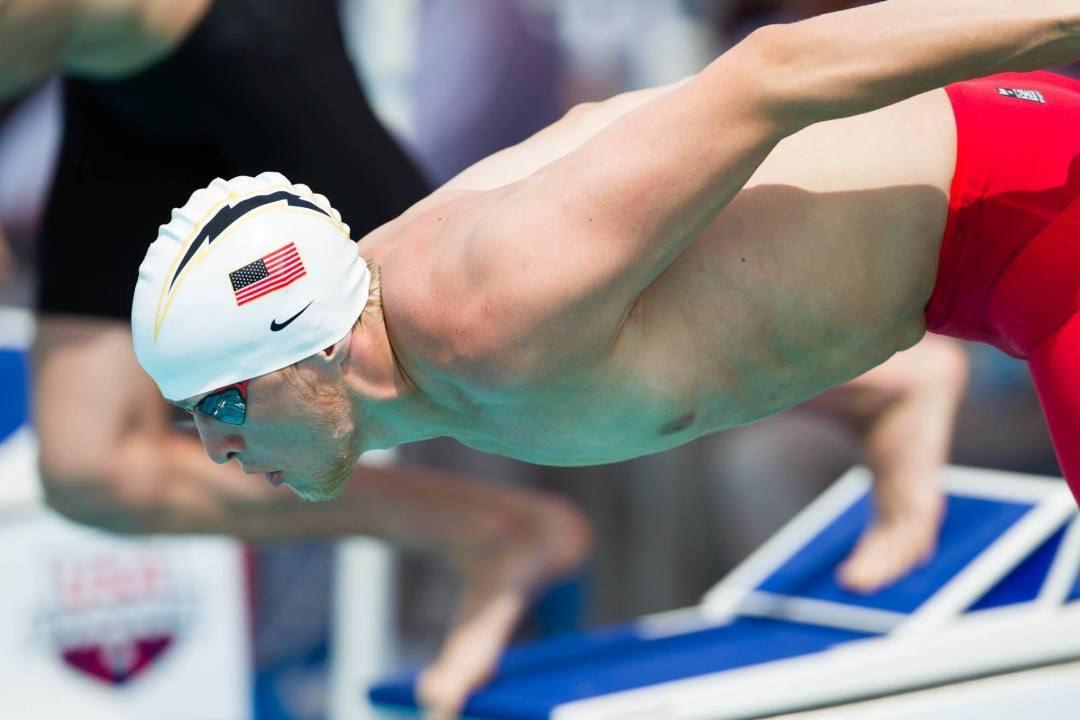 Patrick Mulcare of Tualatin Hills swam away with the 200 backstroke victory in a meet record time tonight at the 2015 Speedo Champions Series - Western Region. Archive photo via Tim Binning/TheSwimPictures.com

The women’s 100 freestyle saw two Tualatin Hills Swim Club swimmers charge to the wall in a 1-2 finish fashion. Keaton Blovad knocked about a second off her seed time to take the win in 49.01, while teammate Sara Metzsch followed closely behind in 49.64.  For Blovad, this marks the first time the youngster has dropped beneath the 50.0 mark for the first time ever; her previous best was the 50.90 she registered earlier this month at the Oregon-Region XII Senior meet.  Denver Swim Academy’s Ann Ochitwa rounded out the top three in the 100 free tonight in her time of 49.76.

Mariah Gassaway took the time drop theme to another level in the 200y breaststroke, where she swam away with the victory in a time of 2:15.18, a full four seconds faster than her 5th-placed morning swim.  Second to Gassaway was Mesa Aquatic Club’s Grace Horvath, who touched the wall in 2:15.56 and they represented the only sub-2:16 swimmers of the field.  Kendall Crawford of University of Denver Hilltoppers, came into the final as the top seed with her morning swim of 2:16.17, but finished in third tonight in 2:16.01.

Wasatch Front Fish Market’s Rhyan White laid waste to the 200y backstroke field, as she took the win in a swift 1:54.93, leading the field by over two full seconds.  This also crushed the 2:01.24 season best time thus far that she clocked just last month in February.  Sara Metzsch earned her second runner-up finish of the night, touching the wall in this event in a time of 1:57.42.  Metzsch moved up three spots from her 5th-seeded position entering tonight’s final..  Front Range Barracudas swimmer Shelly Drozda clocked a 1:58.01 for third place, improving on her fourth position from prelims.

Topping off the individual event program, the 200y butterfly event winner was Boulder Swimming’s Julia Box, who dropped over 2 and a half seconds from her seed time to dip under the 2:00 threshold in a winning time of 1:59.18. Kelly Huffer from Scottsdale Aquatic Club was next at the wall closing in second place with a time of 2:00.26. Jocelyn Wang came in third in the event with a 2:01.88 time for her efforts.

Scottsdale Aquatics earned the victory in the 200y medley relay, clocking a time of 1:42.34.

The men’s events were just as intense, with veteran racer, 30-year-old Darian Townsend throwing down an impressive 43.83 to top the men’s 100 freestyle field tonight.  Tualatin Hills Swim Club’s Patrick Mulcare touched in second place in a time of 44.48, a significant improvement over the 46.58 he earned earlier this month at a senior meet.  Tonight, Mulcare was followed by teammate Liam Metzsch in 44.90, whose season-best was a 45.72 coming into this meet.

Carl Mickelson dropped the hammer on the 200y breaststroke race, as he shaved just under three seconds off of his prelims time to clock tonight’s winner in a career-best 1:54.33.  Phoenix Swim Club’s Matthew Anderson was the runner-up in 1:55.27, followed by Arizona Gold Swimming’s Mark Jurek who touched in 1:59.99 for third.  Both Mickelson and Anderson surpassed the Western Region’s meet record of 1:56.33 set by Eetu Karvonen back in 2011.

Tualatin Hills Swim Club’s earned the men’s 200 backstroke victory tonight, as Patrick Mulcare got his hand on the wall first in 1:42.21, clearing the field by over two and half seconds, setting a new meet record in the process. Mulcare held the old mark of 1:42.99 set at the 2014 edition of this meet.  Daniel Carr from Cheyenne Mountain Aquatics clocked a 1:44.97 tonight for second place, followed by Tucson Ford Dealers Aquatics’ Matthew Lujan who earned third in 1:47.90.

To wrap up the individual events this evening, Jurek came back for more and pulled off the 200 fly win tonight, dropping a huge four and a half seconds to register a speed 1:43.72 for the event win.  Jurek cranked out a new meet record in the process, overtaking the previous mark of 1:45.08 registered by Mathias Oh last year. Teammate Brent Creager earned second place in 1:43.72, as he also dropped mega time – almost 5 seconds in his case.  Mesa Aquatics Club saw Kyle Ewoldt touch in third place, adding a couple of tenths to his seed time to wind up with a 1:48.13.

Prelims continue tomorrow at 9am local time with the 200y freestyle and 400y individual medley events.

Congratulations to Rhyan White, our granddaughter. She works so hard and is most deserving.