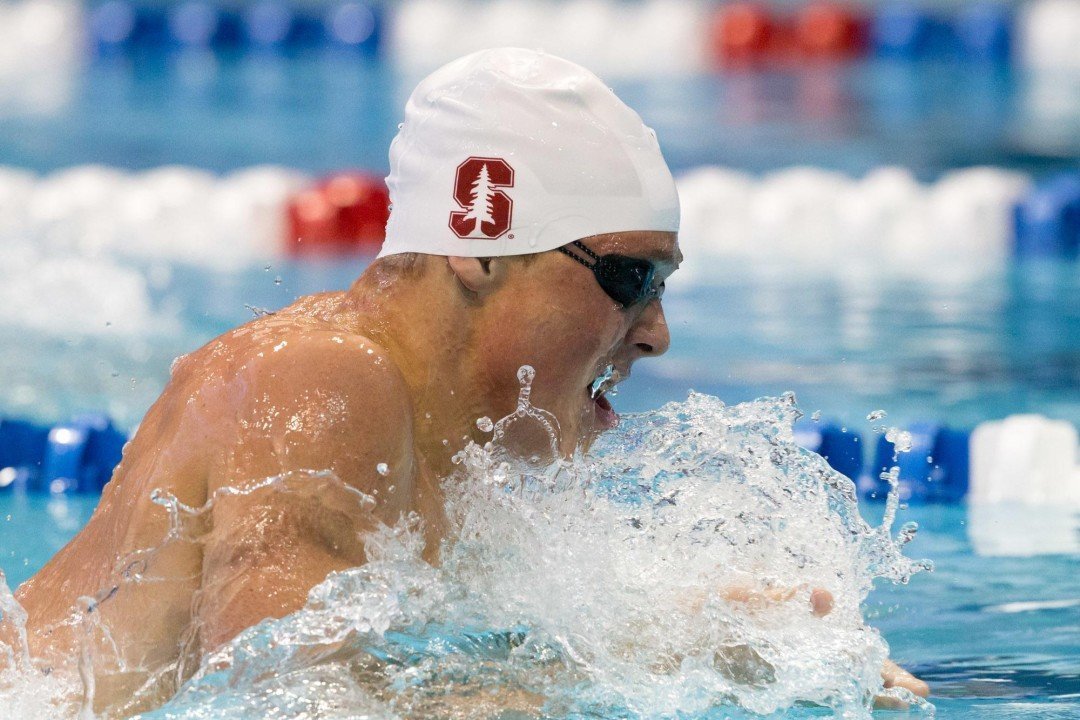 For the second time in a week, a Pac-12 athlete has broken the hallowed 1:40 barrier in an event some though was impossible. Then: Missy Franklin in the 200 free. Now: David Nolan in the 200 IM. Current photo via Tim Binning/TheSwimPictures.com

For the second time in a week, a Pac-12 athlete has become the first swimmer ever under 1:40 in an event by a huge margin.

Last week it was Cal women’s Olympian Missy Franklin who did it with a 1:39.10 in the 200 free, and this week it was David Nolan. The Stanford senior burst past the 1:40-wall with flying colors in the 200 IM, going 1:39.38 to cut over six tenths off his own American record.

The swim was a thing of beauty. Nolan played perfectly to his strengths – smashing his way to a big lead on backstroke and closing with an uncatchable free split – while minimizing his weaknesses, taking over the lead from the first wall and never letting anyone come close.

Every one of Nolan’s stroke splits is outstanding in its own right. He was 21.67 on fly (tied for the best in the field), 24.32 on back (the best in the field by a longshot, even better than Cal’s backstroking NCAA record-holder Ryan Murphy), 29.21 on breast (second-best of the field) and 24.18 on free (the fastest free split of the event).

Nolan is now the fastest man in history by over .7 seconds. The second-fastest swimmer in history was in this field, and Nolan put him to shame – that was Texas sophomore Will Licon, who went 1:40.09.

That win has Stanford running 6th currently, and breathing down the neck of USC, who won the Pac-12 conference meet and was a potential national title challenger coming into this meet.

That is quite possible, however I don’t see either competing fully tapered for a yards meet again…ever (but it would be fun to see!). The only real test now to find the best IMer is Nolan vs Lochte and Phelps in LCM or Nolan vs Lochte in SCM.