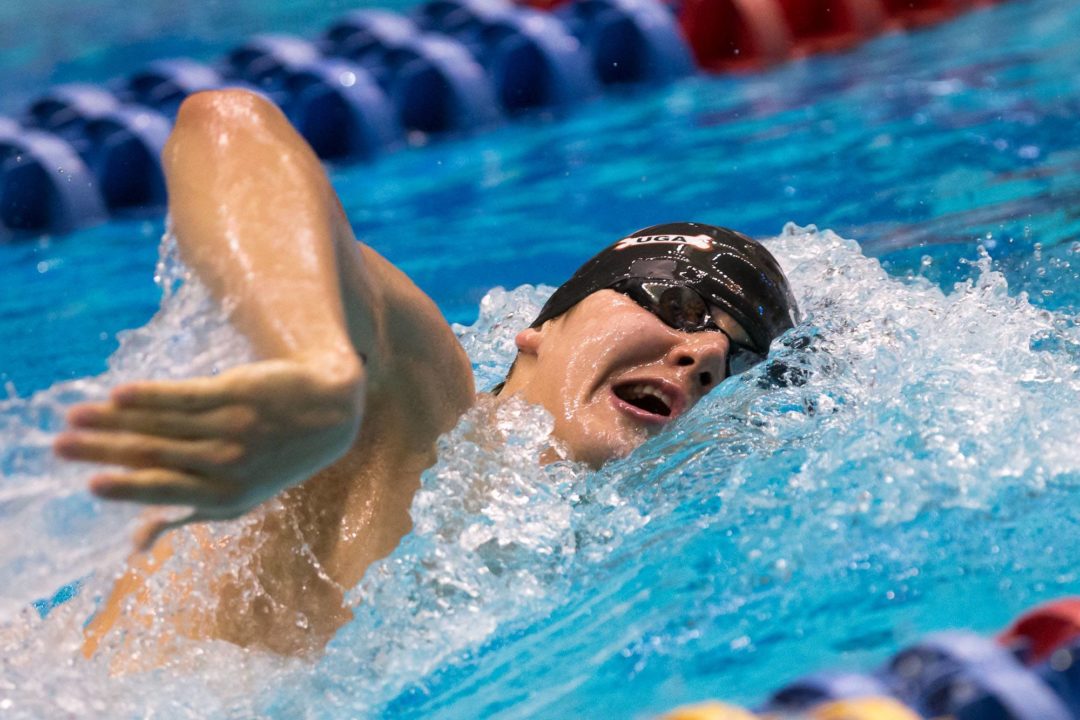 That time for Koski would have been good enough for a bronze medal in the championship final, beating out USC sophomore Reed Malone's time of 4:12.67. He would have been just off a silver medal performance as well, coming within a few tenths of a second off Dan Wallace's 4:11.62. Archive photo via Tim Binning/TheSwimPictures.com

Matias Koski of Georgia has qualified for the championship final in the 500 freestyle for two years straight, however he missed the mark this year, but managed to make up for it with an incredible performance in the consolation final.

Koski, a two time fourth place NCAA finisher in the race, was kept just out of the championship final during day one prelims after putting up a 4:13.72 in the heats. The cutoffs for finals were a 4:13.65, leaving Koski ninth overall.

The Georgia junior took full advantage of the situation, and took absolute control of the consolation final right from the get-go. At the first 100 he was a 48.06, over half-a-second faster than he split on the first 100 in prelims.

He continued on his pace, turning in 1:38.74 at the 200. Koski kept moving, maintaining over a body-length lead on the field as he trudged to the wall and eventually touched in with a time of 4:11.83. That time won the consolation final by a wide margin, as second place finisher Anton Ispen of NC State was almost two seconds behind him.

That time for Koski would have been good enough for a bronze medal in the championship final, beating out USC sophomore Reed Malone’s time of 4:12.67. He would have been just off a silver medal performance as well, coming within a few tenths of a second off Dan Wallace’s 4:11.62.

Koski will have two more shots at individual medals this weekend. He’ll be swimming the 200 freestyle and the 1650. In the 1650, he’s seeded second overall behind Northwestern’s Jordan Wilimovsky. Koski will also likely be a member of Georgia’s 4×200 freestyle relay.

Why the Koski paragraph for a guy who finished 9th? Heck, Quintero’s been faster and he didn’t win either