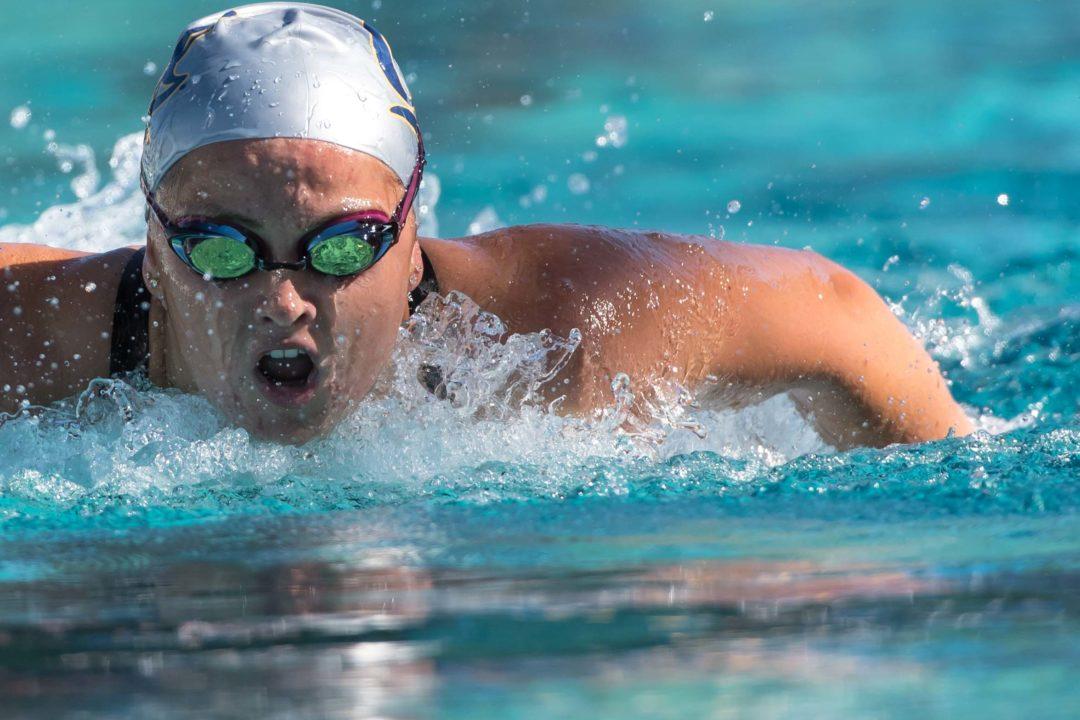 Katie McLaughlin won a pair of events on the final night of the 2018 Speedo Grand Challenge. Archive photo via Mike Lewis/Ola Vista Photography

The final night of swimming from the 2018 Speedo Grand Challenge in Irvine produced some close races, a good number of best times, and a couple of meet records.

Unlike the majority of meets, there was actually prelims and finals for the distance events (done earlier in the meet, not this morning). Jordan Wilimovsky and Nick Norman went to battle once again in the men’s 1500, with Wilimovsky negative splitting (7:37.7/7:33.9) en route to the win in 15:11.70. Norman, who lowered his best time by over six seconds in prelims down to 15:23.09, took it down another six for 2nd place in 15:16.81. Wilimovsky is currently the 2nd fastest American this year behind Zane Grothe, while Norman is now 4th behind those two and Andrew Abruzzo.

Michael Jensen finished the night out in the men’s 100 freestyle, breaking 50 for the 5th time in his career (also did this morning) in 49.51, making him the 7th fastest American this year. Marius Kusch was the runner-up in 50.83.

I was impressed with Will Licon. He is usually pretty average (no offense) but he swam smart races and had some good times!

Hint: This swimmer isn’t listed in “IN THIS STORY” section.

Yea don’t worry. We all know by now which swimmer you’re talking about every single time you comment.

I have full confidence in and never worried about you. It was a quiz for Swimswam. Last two meets (international and domestic) firmly established this swimmer in the middle of the peloton of American swimmers. Maybe it’s time to update the source that feeds “”IN THIS STORY” section.

In the meet with many big names this swimmer got the second “iron” score after Katie McLaughlin.

YOUNG SELI GETTING NO LOVE!!!! MY MAN IS STRAIGHT FIRE

53.3 right now is darn good and a serious indicator of what he might bring in the summer . Can’t wait for trials and Pan Pacs to happen .

That time by 14 year old Kozan is crazy good!

Her 400 IM was impressive too.

Pretty excited and hopeful to see McLaughlin translate her SCY sprint chops to the long pool after the season she had with her sprint races and splits in Cal relays this year.