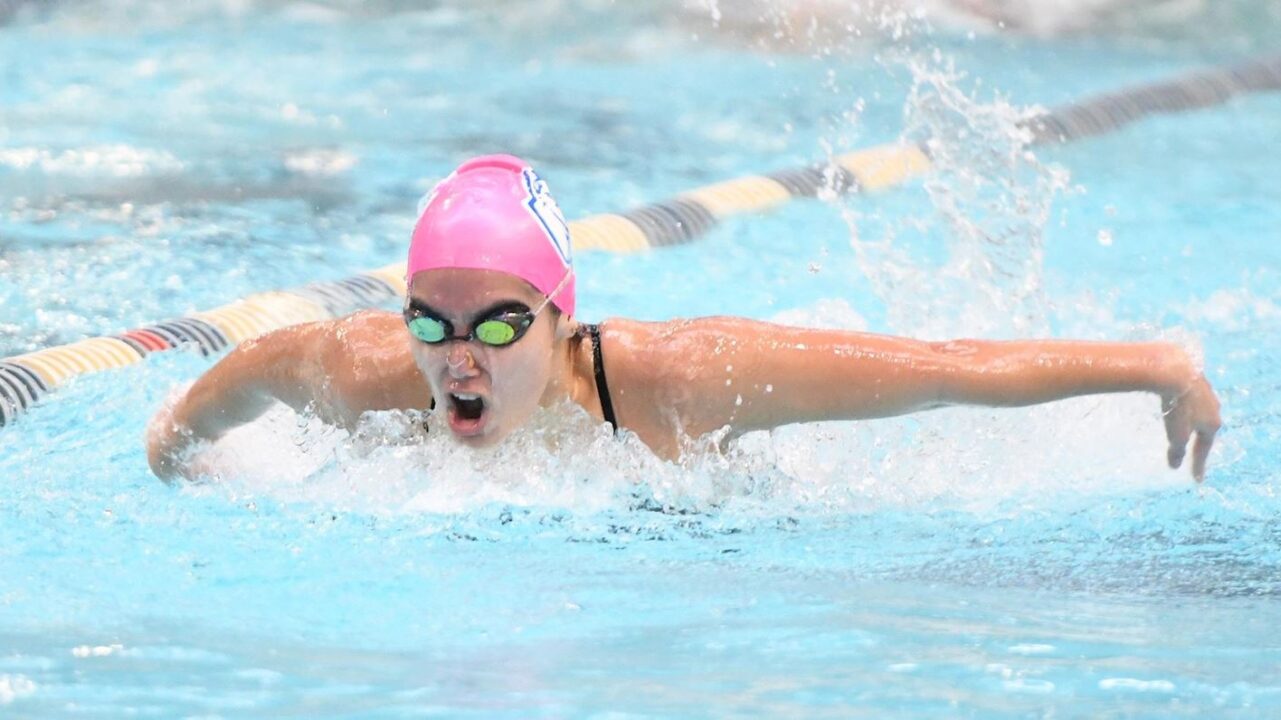 The Saint Louis women easily defeated McKendree and Truman State on Friday, while the Bearcat men comfortably triumphed over the Billikens and Bulldogs. Current photo via Saint Louis Athletics

In Friday’s double dual meet, the Bearcats won 15 of the 16 events, including winning the 400 medley relay for the second straight meet and the Bearcat men also turned in two ‘B’ qualifying times and one automatic qualification in diving thanks to senior Ethan Larson (Anchorage, Alaska/Paidaie Cooperative School) winning the 3-meter diving event with 299.70 points, which was good for NCAA qualification.

The Bearcats won 15 of 16 events against both teams as the only event McKendree didn’t win was the 400 freestyle relay as Saint Louis went first, third, fourth and fifth, while Truman went second and sixth.

Larson also won both diving events as he placed first in the 1-meter (263.78) and 3-meter boards (299.70). Senior Kenneth Glidden (Georgetown, Cayman Islands/Triple C School) was third and second in the 1-meter and 3-meter diving boards.

The other Bearcats to win events were freshman Jackson Lustig (Milwaukee, Wis./Pius XI) as he won the 200 butterfly in a time of 1:51.00, while freshman Patryk Rozenek (Radlin, Poland/Zsoms Raciborz) was first in the 200 backstroke (1:53.31) and senior Gregg Lichinsky (West Des Moines, Iowa/Valley) was the third leg on the 400 medley relay.

McKendree also finished first, second, third, fourth, fifth and sixth in the 200 freestyle, went first through four in both the 100 backstroke and 100 freestyle and was first through third in the 500 freestyle. The Bearcats also claimed the top two finishes in the 400 medley relay, the 3-meter diving and 100 butterfly.

The Bearcats continue its homestand with another double dual meet on Saturday, Oct. 23 as they host 14th ranked Delta State and 15th-ranked Missouri S&T beginning at 11 a.m.

O’FALLON, Ill. – The McKendree University Women’s Swimming and Diving Team opened up its home dual meet schedule at the McKendree Metro Rec Plex Friday afternoon by picking up an impressive 165-119 win over 20th-ranked Truman State and falling 155-138 to Division I Saint Louis University. The 17 point margin against SLU was the closest ever for the Bearcats against the Billikins.

McKendree, who is ranked 24th in the preseason CSCAA Coaches Poll, won six of the 16 events held on Friday, including sweeping placing first and second overall in both the 1 and 3-meter diving competition.

The big winner on Friday was freshman Karley Sonnenberg (Plainfield, Ill./Plainfield North) as she recorded three event wins as she took home first place in the 50 freestyle (24.04) and the 100 freestyle with a ‘B’ qualifying time of 52.09 and was the lead leg on McKendree’s winning 400 freestyle relay that swam a time of 3:33.68.

Graduate student Molly Smalley (Windhoek, Namibia/Plymouth College) earned her first-ever individual event win as a Bearcat as she posted a time of 2:11.55 to win the 200 IM.

In Friday’s other relay event, the Bearcats just missed a first place finish as they posted a time of 3:58.35 to finish second in the 400 medley relay. SLU won the race in a time of 3:57.13. The members of the medley relay team were freshman Caitlyn Sligh (Tomball, Texas/Tomball Memorial), junior Grace Credit (La Grange Highlands, Ill./Lyons Township), Abbruscato and Sonnenberg.

The Bearcats will return to the pool on Saturday, Oct. 23 as they host 16th-ranked Delta State in a dual meet beginning at 11 a.m. The Bearcat men will host both Detla State and Missouri S&T on Saturday.

The Billikens return to action Saturday, Nov. 6, in a double dual vs. Evansville and Little Rock in Evansville, Ind.

O’FALLON, Ill.—The Truman Swimming Teams took on Division I Saint Louis University and GLVC rival McKendree in a tri-meet Friday afternoon, and the Bulldogs fell to both the Billikens and Bearcats. The women fell to McKendree 165-119 and Saint Louis 193-87; while the men fell to SLU 205-66 and McKendree 222-62. For full results, click here.

The Bulldogs will be back in action next Friday as they take on Saint Ambrose in Kirksville.