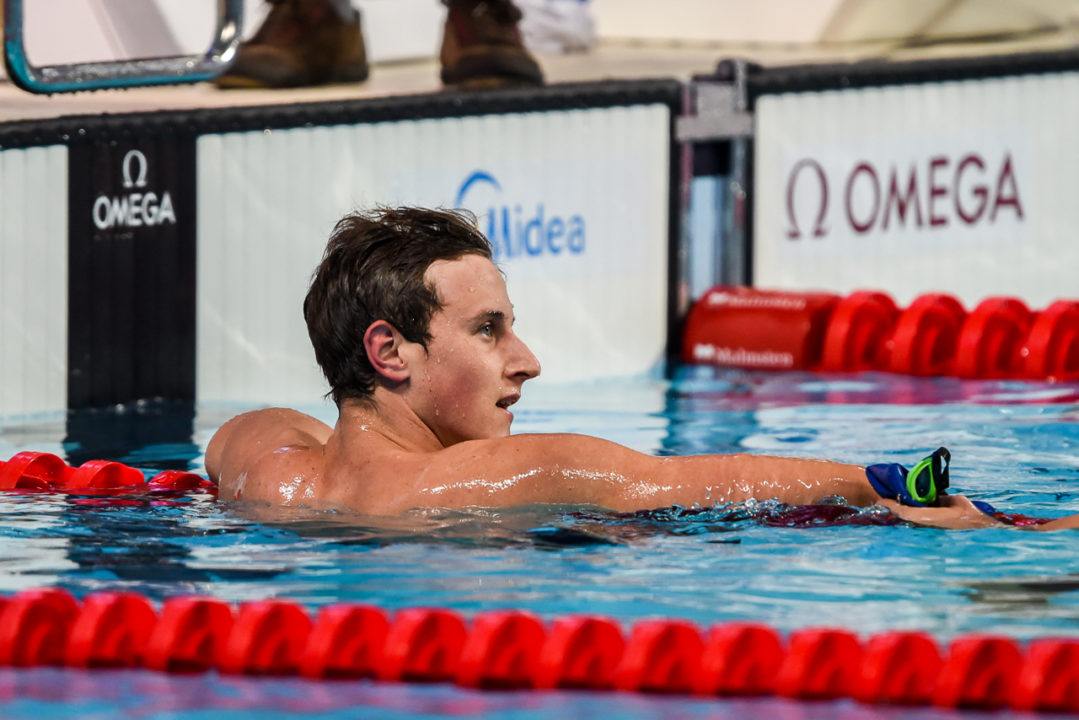 Cameron McEvoy doubled up on freestyle wins while competing at the site of the 2018 Commonwealth Games. Archive photo via Peter Sukenik/www.petersukenik.com

Several high-profile Australian swimming stars took to the pool today to compete at the 2017 CSi SOSC Open Meet, also known as the Southport Twilight meet. Heavy into their training with the NSW State Championships less than a month away, Olympians Cameron McEvoy, Daniel Smith, Georgia Bohl, Taylor McKeown, and Emma McKeon were in action at the aquatic site of the 2018 Commonwealth Games.

McEvoy splashed first in the men’s 50m freestyle, taking the event in a time of 22.06. That’s a solid time for ‘The Professor’, whose nearest competitor finished over a second behind. McEvoy took the treble of freestyle events at his nation’s Olympic Trials, earning berths in the 50m, 100m and 200m freestyle, but gave up his 200m free spot to teammate David McKeon.

The 22-year-old Bond swimmer also scored the win today in the men’s 100m freestyle, taking the event in a time of 50.13. That is a modest time for the fastest man ever in a textile suit, with that feat sitting at an incredible 47.04 from last year pre-Rio. Today, his 50.13 was just enough to edge out Olympic teammate Smith, who touched just .01 behind in 50.12.

Smith got the upper hand in the 200m freestyle event, however, as the former Miami swimmer fired off a time of 1:48.54 to McEvoy’s 1:49.26. The two represented the only sub-1:50-second swimmers of the field and their times sit in line with where the athletes have been thus far this season. McEvoy currently ranks 8th in the world with his time of 1:48.05 from the Queensland Championships in December, while Smith sits as the 10th fastest 200m freestyle swimmer worldwide with his mark of 1:48.61 from this January’s Victorian Open.

The women had strong in-season showings today, with McKeon leading the way with 3 event wins. The Olympic gold medalist checked in with wins in the 200m and 400m freestyle races, while also topping the podium in the 100m butterfly before scratching the 100m free event.

McKeown and Bohl dominated the women’s breaststroke events, with the pair splitting both races. McKeown took the women’s 200m distance in a time of 2:27.98 to Bohl’s 2:29.36, while Bohl earned the 100m breaststroke win. In the latter event, Bohl’s time of 1:08.72 was just under a second faster than McKeown’s 1:09.63, but all showings were indicative of their in-season training status.