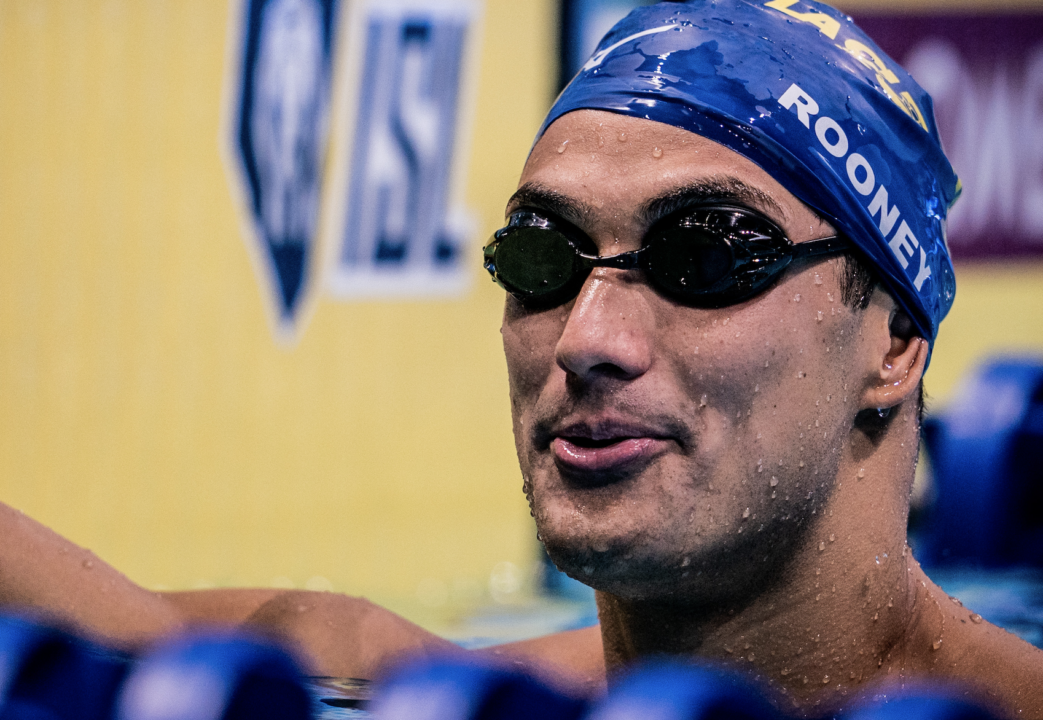 Maxime Rooney has a chance to make the U.S. Olympic Team in both races, but will swim only the 100 fly, his better individual shot, on Friday. Current photo via Mine Kasapoglu for ISL

Maxime Rooney has dropped the 200 free in favor of the 100 fly and Caeleb Dressel, as expected, is done with racing as we enter the third day of competition at the Pro Swim Series meet in San Antonio, Texas.

Rooney, a first year pro who started his college career as Dressel’s teammate before finishing it at the University of Texas, is the top seed in the 100 fly after Dressel’s scratch.

To focus on that race, Rooney has dropped out of the 200 free, where he was due to be the 6th seed.

Which of those races Rooney will swim at the U.S. Olympic Trials is still uncertain, though he has a strong chance at qualifying for the Olympic Team in both events. In the 200 free, his best time of 1:46.78 will rank him 8th among Americans heading into Trials. If the U.S. takes the top 6 in that event, which they normally do, Blake Pieroni (who will swim the race on Friday) has a qualifying-period-best of 1:46.62 – less than two tenths better than Rooney.

In the 100 fly, meanwhile, Rooney has not only a chance to make the team, but to medal individually. His 50.68 from the 2019 U.S. Nationals was the #2 time in the world that season, behind only the aforementioned Dressel.

As for Dressel, his Friday morning scratches confirm what he said on Instagram Live earlier in the week. He has left San Antonio to attend the wedding of his best friend, podcast partner, and former University of Florida teammate Ben Kennedy.

Cox’s biggest international achievement was a 2017 World Championships bronze medal in the 200 IM, but that 200 IM field for Tokyo looks a lot more crowded with Kathleen Baker putting focus on the race and young swimmers like Kate Douglass and Alex Walsh rising up.

She won’t give up on that 200 IM though – just before pandemic quarantines hit, Cox swam a best time of 2:09.0 at the Des Moines Pro Swim Series stop which would have been this same week last year.

Cox’s best time in the long course 400 IM is a 4:37.94. Her biggest challenge to matching that time on Friday is that she’s currently entered in three events for Friday. If her schedule holds, she’ll start the day in the 200 free, then swim the 400 IM, then finish with the 100 free.

At present, she’s only seeded to make an A final in the 400 IM, though, so maybe we’ll see that race as a solo in finals. We saw that pattern from her on Thursday, anyway, when she held on to her A-final spot in the 100 breaststroke, placing 5th in 1:09.17 in finals, but dropped the 400 free B-final swim she also earned.