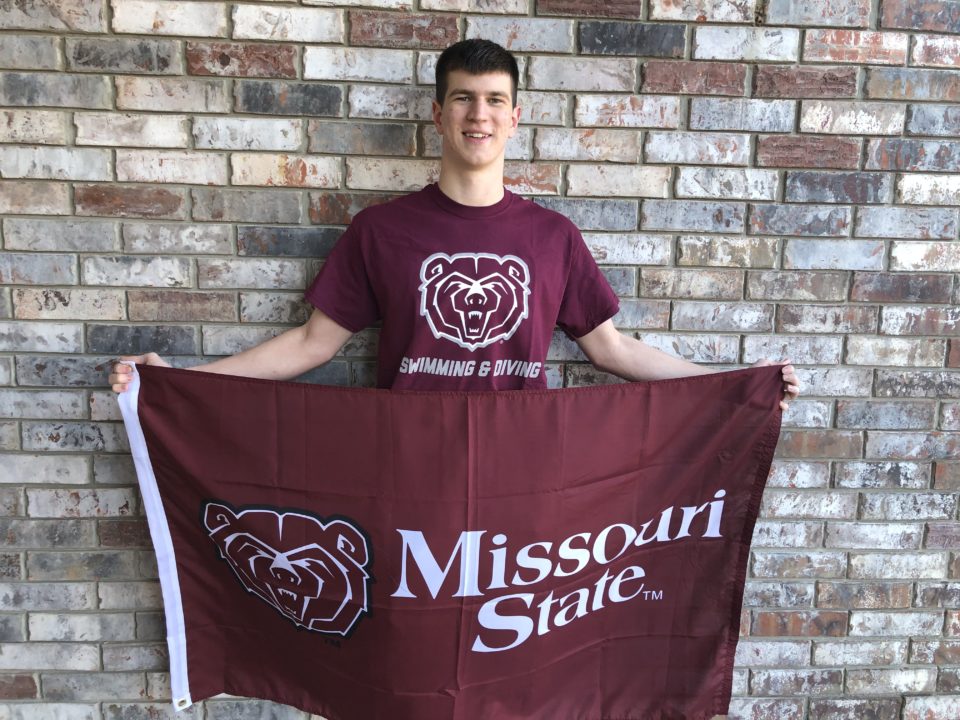 2019 Arkansas State LC champion Drew Watts has announced his decision to swim for Missouri State University beginning in the fall of 2021. Current photo via Drew Watts

Missouri State University has picked up a verbal commitment from Drew Watts of Joplin, MO. He swims year-round for Berzerker Swimming and will graduate from high school in the spring of 2021.

I am very excited to announce my verbal commitment to Missouri State University. I look forward to growing academically and athletically to reach my fullest potential. A special thanks to Coach Shawn K and all the Berzerker coaches for helping and supporting me through the years.

Watts’ club coach Shawn Klosterman told Swim Swam, “In old Norse berserker literally translates to bear-skin. Odin’s elite would wear fur into frenzied battle, drawing strength and courage from the spirit of the great animal as though they had become the bear themselves. As a Missouri State alumni I could not be more proud to send Drew off to actually BE A BEAR. Coach Collins and his staff are getting a hidden gem who is a fiercely trained warrior and also a fun guy to be around.”

In July of 2019, Watts competed at the Arkansas Swimming State Long Course Swimming Championships. He placed within the top 8 in 6 of his 7 events and ended the meet with 5 new personal best times. He scored the most points in the 100 breast, touching 1st and 3rd respectively. Watts went 5.3 seconds faster in finals of the 100 breast, powering home 2.3 seconds ahead of the next competitor.

Watts was seeded first going the finals heats of the 200 breast. Despite a 5.58 second time drop between prelims and finals, Watts finished 3rd. Only 0.45 seconds separated him from first place.

Watts will join the Bears in the fall of 2021. Missouri State won the 2020 Mid-American Championships, finishing 80 points ahead of 2019 champions Miami University (OH). Watts’ top times would have placed him in the A-final of the 100 breast and the B-final of the 200 breast. Additionally, he would have been MSU’s third-fastest 100 and 200 breaststroker during the 2019-2020 season.

Missouri State has already picked up verbals from Reese Hodgins and David Ribinski for its class of 2025.

If you have a commitment to report, please send an email with a photo (landscape, or horizontal, looks best) and a quote to [email protected]com.