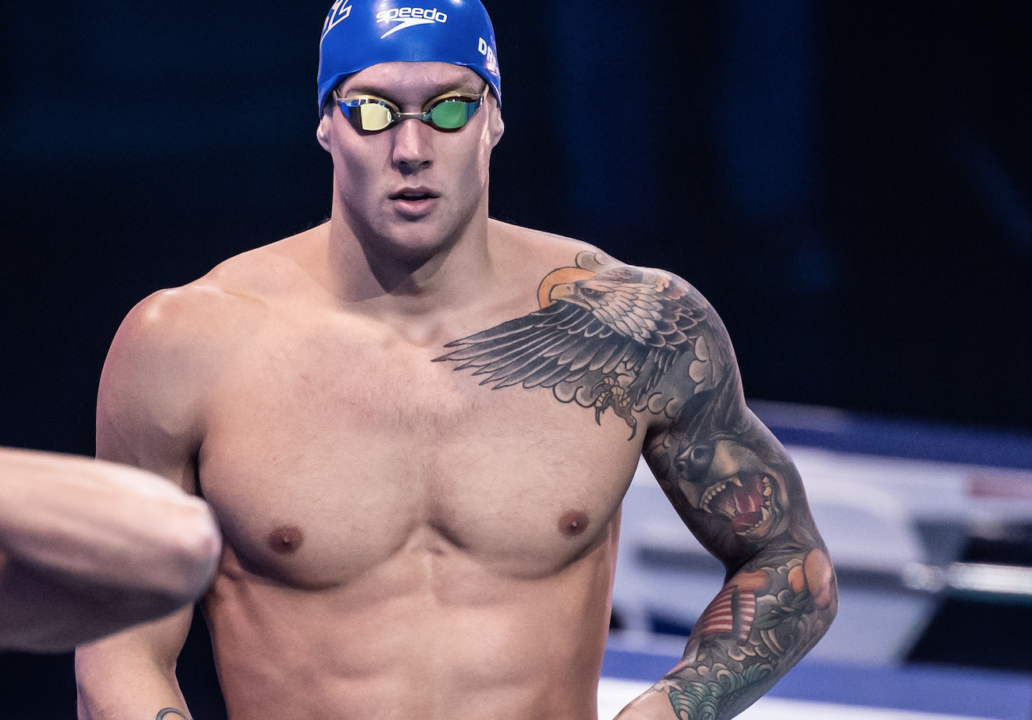 Caeleb Dressel announced via an Instagram live stream that he would be leaving the 2021 Pro Swim Series early to attend Ben Kennedy's wedding. Archive photo via Mike Lewis/Ola Vista Photography

Dressel is also entered in the 200 freestyle, 100 butterfly on Friday but won’t swim those events. His plans to leave after Thursday explain why he’s not entered in the 50 freestyle on Saturday which he would be entered as the top seed with his 21.o4, ahead of Kristian Gkolomeev‘s 21.45.

Dressel will be returning to his home state to attend friend Ben Kennedy‘s wedding to Paige Scheriger. Dressel, Kennedy, and Scheriger swam together at the University of Florida for the 2014-2015 and 2015-2016 seasons. Dressel and Kennedy went on to race for another two years while Scheriger switched to cross country for the 2016-2017 season and then swam as a redshirt junior in 2017-2018.

Dressel and Kennedy have remained close friends ever since and launched a podcast together in December 2019. The duo released 36 episodes of the podcast, the most recent of which came out on July 26, 2020.

The Dressel wedding occurred this February and Kennedy was in attendance at the ceremony, as well as at the bachelor party:

The Pro Swim Series, San Antonio will get underway tomorrow night at 5 PM CT with the women’s and men’s 1500 freestyles.

Something hilarious about Dressel being ‘the only sub-47 entry with a 46.96′. Can’t believe there aren’t more sub-47s entered in this meet.

It’s his best friend’s wedding, of course he’s leaving early! If he’d had stayed the whole meet, he likely would have scratched a bunch of events, so only being there one day means we should get to see him swim the 100 free AND the 200 fly instead of just the 100 free.

Dressel is afraid of 200 freestyle

You are the reason why people are afraid Mr. Piano

Big mans finally tying the knot. Do you guys have insider info if Caeleb is his best man?

How rude, Ben! He should have pushed the wedding back a couple of days to work around Caeleb’s schedule.