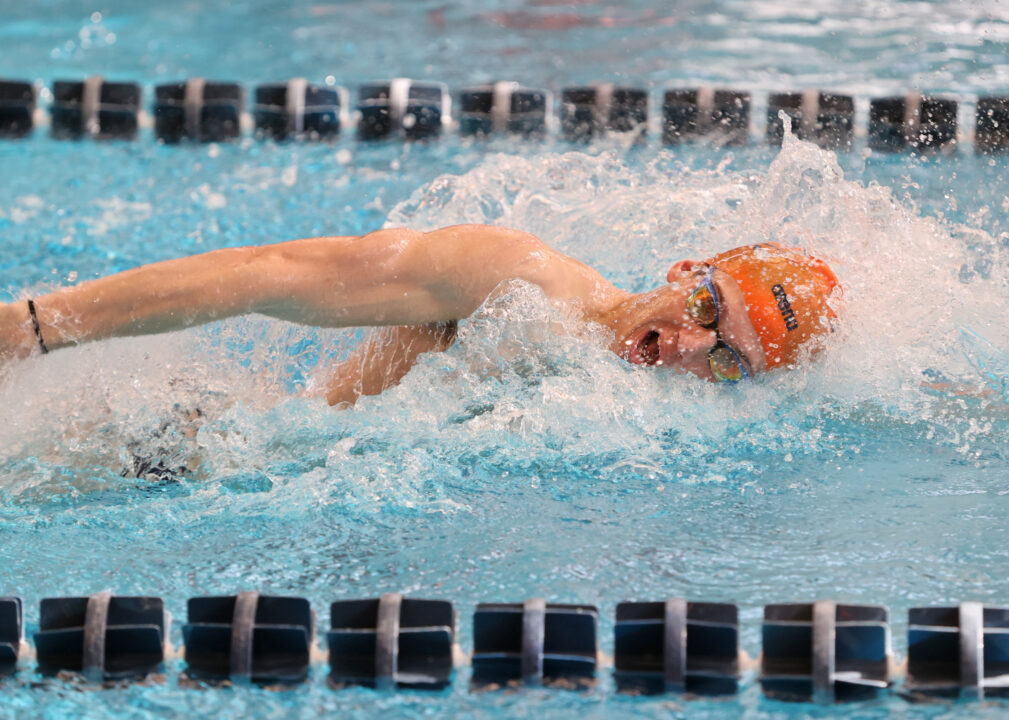 UVA teammates Matt King and Gretchen Walsh and 15 year-old Thomas Heilman all had big swims in the 100 free to go along with plenty of other fast swimming. Archive photo via Matt Riley – UVA Communications

While the Speedo Summer Sectionals series may be the “biggest” domestic events of the week, plenty of top-notch swimmers are opting to race at “smaller” meets as well, and the Virginia Long Course Senior Championships is one of those meets that’s attracted some national-level talent.

And we got some fast times quickly in the first session, as rising UVA junior Matt King dipped under the 49 second mark for the first time in his career with a 48.87 win in the 100 free. King came into today with a best time of 49.98 from last summer’s Olympic Trials. He demolished that mark with a 49.17 in prelims, then went another three-tenths faster in finals. Tonight’s time would’ve put him 2nd in the 100 free B-final at April’s US Trials.

Virginia Tech’s Joseph Hong won the 100 breast by nearly a second with a 1:03.98; that swim set a new lifetime best for the rising sophomore by over half a second. UVA commit Bobby DiNunzio of TIDE won the 1500 free with a 15:48.43.

On the women’s side, arguably the most intruding swim of the evening also came in the 100 free, which rising UVA sophomore Gretchen Walsh won with a 54.98. That’s still over a second shy of her lifetime best of 53.74 from the 2019 Junior World Championships, back when she was 16, but it is faster than she went at last year’s Olympic Trials or at this spring’s International Team Trials. In an interview shortly after Worlds, UVA head coach Todd DeSorbo acknowledged that Walsh has struggled in this event the last few years, and revealed that she would be only racing this event in a training suit until she hit an undisclosed goal time. So, if we see Walsh step up to the blocks at next month’s Nationals in a training suit, we can assume that the goal time was faster than 54.9.

NOVA of Virginia had a strong showing among both the men’s and the women’s competitions, but they really were a force on the women’s side, nearly sweeping the individual events. That was due largely in part to 15 year-old Elle Scott. Swimming against a 200 IM field that included two current UVA swimmers, one current Stanford swimmer, and one Stanford commit, Scott took the lead on the breaststroke leg with a strong 39.31 split. That split gave her enough of a cushion to hold off TIDE’s Kayla Wilson, even though Wilson outsplit her 30.54 to 32.72 on the anchor leg. Scott won in a lifetime best of 2:17.39, while Wison, the aforementioned Stanford commit, also hit a new lifetime best. UVA’s Ella Bathurst finished 3rd in 2:18.37.

took me awhile to finish…….

Which events Heilman is going to enter at Nats next week? Really looking forward to following him at this summer meetings!

*in a couple of weeks, sorry

Only 50th. Not nearly as high as I expected.

Yeah, seems to be the 13th fastest 15-year-old American. Very easy to forget just how much young talent the U.S. has had